We have a deal on the Numi Power Mat, a mouse pad with a built-in Qi wireless charger for your iPhone or Android device. The idea is to reduce desk clutter by combining these two surface-occupying devices. The surface is made from a smooth polyester designed to work with all mice. The Numi Power Mat is $32.99 through our deal.

We have a deal on the Chargeworx Motion-Activated Wireless Charging Car Mount. This car mount attaches to your air vent, dashboard, or windshield, and has a built-in Qi wirelesss charger. It also comes with a built-in infrared motion sensor so you can attach or remove your phone with one hand. This car mount is $39.99 through our deal.

Adrian Kingsley-Hughes has a tip for iPhone owners: Reboot it at least once a week as a security measure.

Not only does this clean the systems RAM and get it ready to do more work, it also helps protect against remote exploits by making it harder for hackers to keep control of your iPhone — hacks don’t survive reboots.

A good, practical, and easy tip for Apple users.

We have a deal on the Urban Warrior Wireless Charging Box. This box features a wireless charger, 6 charging cables, a SIM kit, a phone cradle, and a memory reader. Plus, it has ambient LED flashlight in case you need it. It’s $58 through our deal.

We have a deal on the Sun Chaser, a 20,000mAh solar-powered wireless phone charger. It can simultaneously charge up to 3 devices with its Qi-standard wireless charger and two USB ports and a USB-C port. In addition to charging with solar cells, it can also be charged through a microUSB port. And it has an LED floodlight built into it. The Sun Chaser is $59.99 through our deal. 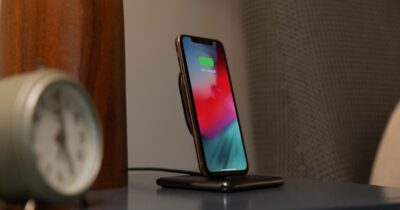 Most wireless chargers make you lay your iPhone face up. If you want to use your iPhone while it charges, you need the HiRise Wireless.