Back in October Sonos announced that AirPlay 2 would be supported on some of their speakers this year, but didn’t detail which ones. We made some guesses back then, and recently did some digging. Sonos now knows which speakers will natively support AirPlay 2: the Playbase, the current-generation Play:5, and the Sonos One. 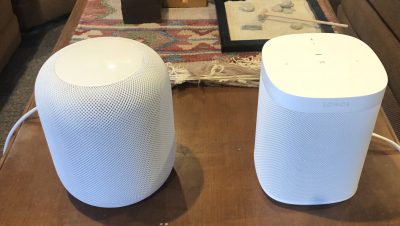 Dave Hamilton, self-professed musician and geek, takes us through his first weekend with HomePod, dissecting what it means to him, and what that might (or might not!) mean to you.

Wireless speaker company Sonos recently debuted voice support in two forms: pairing their speakers with an Amazon Alexa-enabled device like an Echo or Dot, and with Sonos’s first voice-enabled speaker, the Sonos One. We put the new speaker through its paces.

NEW YORK CITY – Details were sparse, but throughout the presentation, the company said the brand new, voice-controllable Sonos One would support AirPlay 2.