It’s time to take a look at Apple’s revised version of the Apple TV app.
Let’s walk through it.

First, we need some definitions.

For those who are fond of firing up a tvOS or iOS app, say Netflix or Amazon’s Prime Video app, and watching favored content there, that’s still possible. One can live in those encapsulated apps. But there are people who don’t want to have a myriad of apps. They’d rather live in just one app.

Of course, that’s not entirely possible now. Netflix is not [yet] available as an Apple TV Channel. Netflix sees Apple as a strong competitor and would rather keep you in the Netflix app.

The Apple TV app also provides access to other third-party video services including Hulu, CBS All Access, ESPN+ and Amazon Prime Video, with the ability to search for and browse selections from those apps.

That is, if you are subscribed to those services.

The TV app is very similar on iOS and tvOS. In iOS, your library is found in the middle tab at the bottom of the app. In tvOS, it’s found at the top right of the app’s screen. You can do everything in the iOS app that you could on the tvOS app.

In iOS [From Apple]:

If you don’t have any subscriptions, there won’t be an entry. If you do, you’ll see something like this.

Subscribing to a Channel

In the TV app, you’ll need to scroll down past all the main sections. What to Watch, then New and Noteworthy and, finally, all the Featured entries. Eventually, you’ll get to this:

If you tap on one, you’ll get a verification page. It’ll look like this. 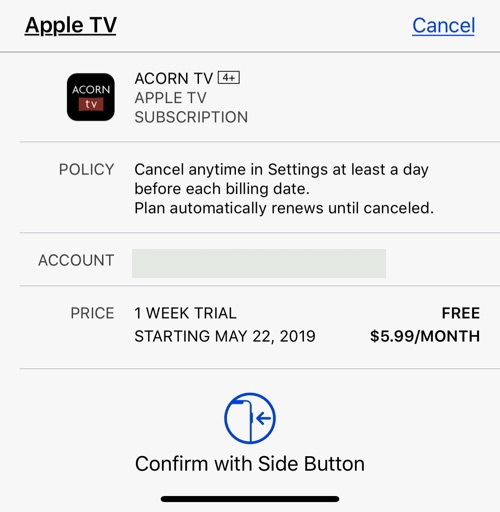 I had to poke around to find the controls for the subtitles in iOS. In iOS, that’s managed by a small info box at the bottom right of the player controls.

But on the Apple TV, in tvOS, swipe down on the remote touch surface to bring up the subtitles option. Swipe up when done.

I think it’s very weird and confusing that Apple makes us scroll past a lot of noise sections before we see the subscription offerings below them. Subscriptions really should be in their on tab.

Also, the days of determining for yourself what’s of interest, then finding it, seem to be forever gone. The TV app presents us with a boatload of what I call happenstance selections. You see something in one of the sections, for example, “What to Watch” and often end up in a time-wasting rabbit hole. This design is visually pleasing at the cost of being clean and direct.

Speaking of direct, the app doesn’t distinguish between what you have access to already, thanks to subscriptions, and what you’ll have to pay for. This seems a lot like pandering for dollars. Shows that will require one to subscribe to a new service to view should have a special $ icon in the corner.

After more testing, I found that the Recently Watched section just up and moved from the top of the Watch Now tab to the bottom. Crazy. Plus, if you only watch a few seconds of a video (for testing) it gets dropped into Recently Watched. What is the app thinking?

I found the “Up Next” entry obtrusive and confusing. I suppose it’s for people who can’t remember what they watched last. At least a long press on the thumbnail for the title allows one to delete it from “Up Next”  and “Recently Watched” sections. Apple is good with housekeeping sanity issues like that.

In the fall, it’s likely Apple TV+ will be added to the available subscriptions. That’s when subscriptions in their own tab, with Apple TV+ showcased, should really be made to happen.

One thought on “An Introduction to Apple’s New TV App”