So what would happen if you were to tell Siri you don't care for her new voice in iOS 7? Reddit member Codyd51 did just that, and posted the results, results that show Apple's engineers have a great sense of humor. As you can see in the image below, her response was, "Oh yeah? Why don't you try multi-dactylic tansubstantiation of natural speech and synthesizing meta-diphones according to the phonotactics of the language using Karczyk-Nephelson's algorithm!? Sorry about that. I was upset." That's just too funny. Reddit member malchyk also told her that he liked her new voice, which earned an equally awesome response. Give us iOS 7 now! 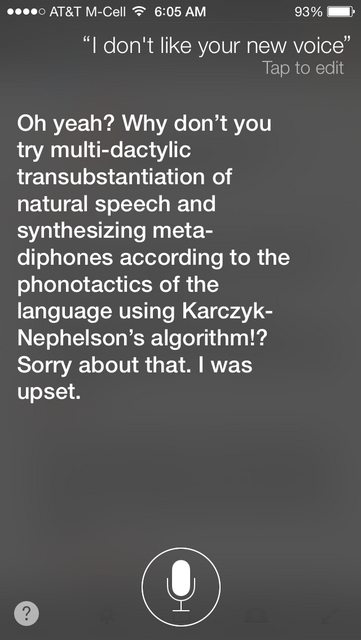 Check It Out: What Happens When You Tell Siri You Don't Like Her New Voice?