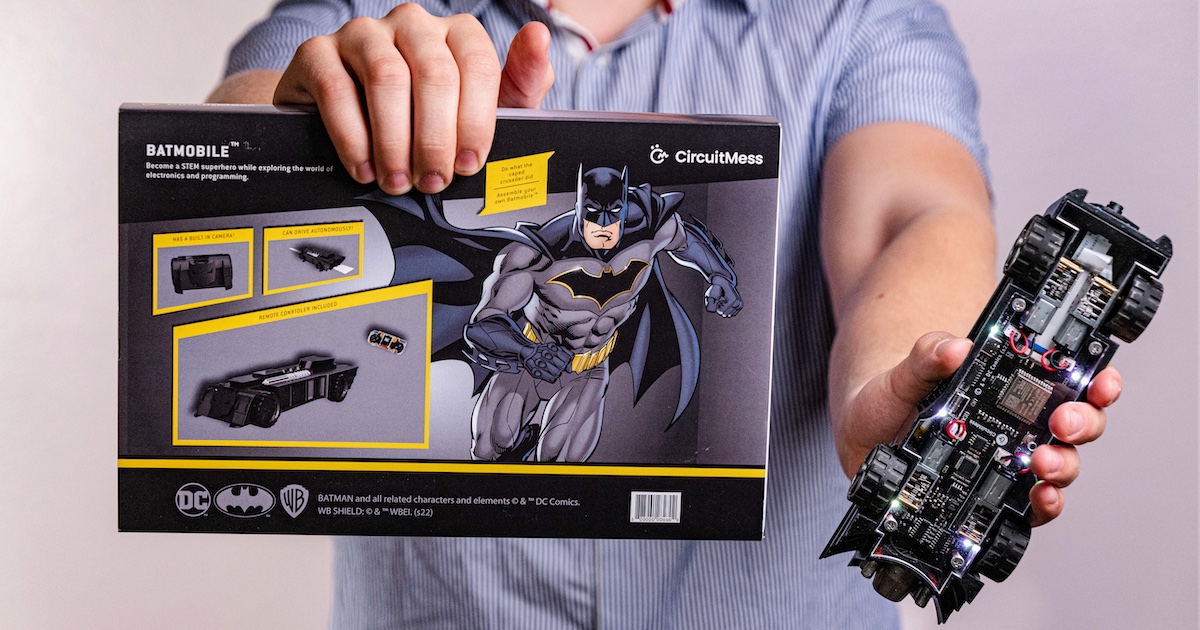 Holy fast funding, Batman! Kickstarter projects are risky at times. We have heard plenty of stories of Kickstarter campaigns that never got off the ground. So, there’s an understandable amount of skepticism whenever I look at a new Kickstarter campaign. In the case of the STEM project kit CircuitMess Batmobile, there is little need for worry. In fact, the campaign was fully funded before most of us finished our morning coffee.

A Startup With a Terrific Kickstarter Track Record

The folks at CircuitMess already have a fantastic track record on Kickstarter. They’ve already got three successful campaigns under their belts, and the company is thriving with the main STEM products they already produce.

CircuitMess manufactures and sells project kits that help teach STEM to learners of all ages. They started off with a do it yourself game console, followed that up with a mobile phone you can build yourself, and now have a series of project kits sold under a subscription plan.

The latest campaign involves a partnership with Warner Bros. and DC Comics. CircuitMess is planning to bring us an autonomous remote control Batmobile.

CircuitMess has truly impressed executives at your brothers. François Simonetta, vice president of Warner Bros. Consumer Products EMEA Agents, calls the start up “truly inspiring”. The senior executive thinks projects like this can be a great learning opportunity.

Turning toys into elaborate STEM kits that teach both electronics and coding is a great way to encourage kids to learn step by doing what is most natural to them: playing. We are excited that the CircuitMess Batmobile is their next and greatest STEM kit so far.

The Batmobile kit is designed for anyone 7 years old or older, and comes with complete instructions. CircuitMess provides options for just about any level of electronics experience. Those old enough to solder can get a kit requiring and helping expand the skill. Those who’d rather have everything pre-soldered can still enjoy the project.

Some of the skills included in the project are coding a microcomputer, learning how autonomous vehicles work, how computers track objects, and developing your own computer vision algorithm.

Fully Backed on Kickstarter in Under 2 Hours

The success of this Kickstarter campaign is already impressive. The project got full funding in an hour and a half, despite the fact that it launched so early most of America was still sound asleep. Founder Albert Gajšak pointed out that the campaign received more pledges in its first 4 hours than their last one did in 24 hours.

As of this writing, CircuitMess Batmobile has pledges totaling more than $70,000. The “fully funded” goal was just $15,000, and there’s still plenty of time to get in on the action. You can still reserve your CircuitMess Batmobile for as little as $99 USD, 41% off the planned retail price. The company expects to begin delivering the kits in July 2022.