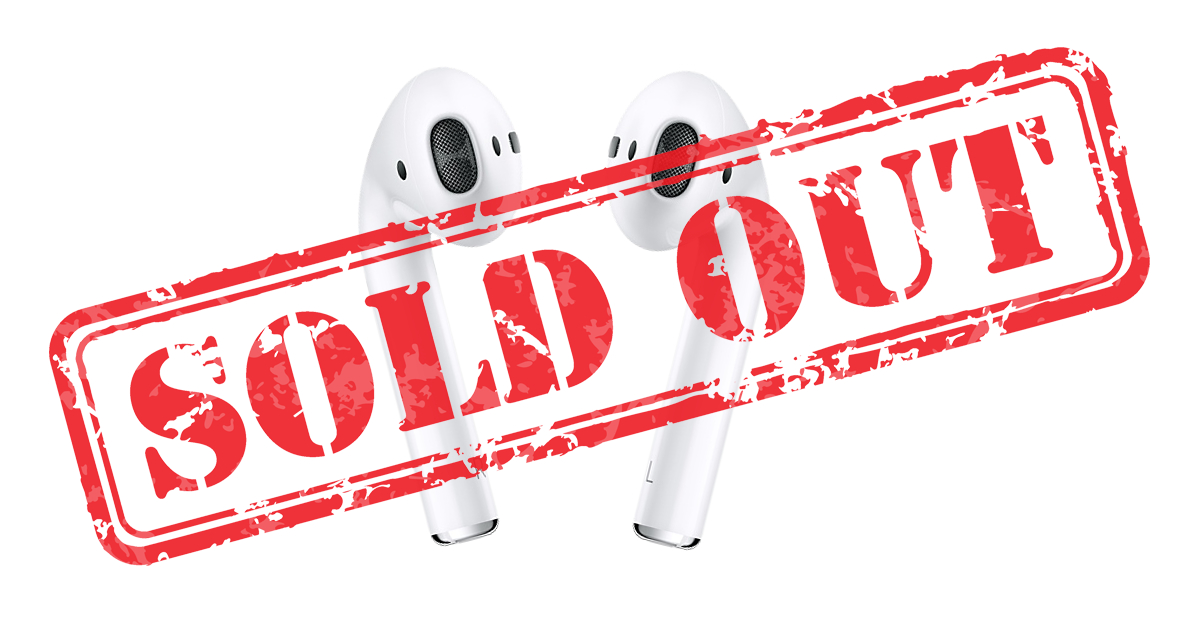 If you’re planning on giving someone AirPods as a holiday present, you better already have them because Apple is sold out into January. A quick check of Apple’s online store shows the earliest you can get the wireless earpods is January 5th, and with free shipping that pushes out to January 9th.

AirPods are Apple’s completely wireless Bluetooth earpods. They were announced in September 2016 with the iPhone 7 and were originally slated to ship in October.

They finally shipped in mid December, but were in such short supply that delivery waits for orders were months-long. Inventory was so limited that Apple’s own stores often got only a handful at a time, and those sold out as fast as they came in. It took until October 2017 before AirPods were regularly in stores.

Apple showed off a new Qi-compatible charging chase for AirPods this September when the iPhone 8, iPhone 8 Plus, and iPhone X were introduced. The company said the wireless charging case would be coming soon, but didn’t offer a firm release date.

With AirPods in short supply now, there is speculation swirling around the internet the new wireless case—and maybe even new AriPods—are on the way. What’s more likely is that AirPods are such a popular holiday gift that Apple simply can’t keep up with demand.

Apple wasn’t able to make enough to even have AirPods on store shelves for nearly a year, and even when it did supplies were still limited. Odds are the frustration last minute shoppers are feeling now won’t be rewarded with updated AirPods and a wireless charging case—at least not yet. Come January you’ll get the same AirPods you tried to buy in December.

Airpods seem to be the most difficult product for Apple to manufacture. I say this as an outsider looking in. They are a fabulous product, yet Apple can’t seem to get ahead of the demand curve. I bet a lot of companies had this problem; making a product that’s so popular that they can’t keep up with demand.

I’ve seen a lot of stupid things on various sites about this. That it shows that Apple is incompetent. That it’s a conspiracy, a deliberate plan for some vague ill defined reason. Seems most likely to me that it’s a week before Christmas. That one of the most popular things on the market this year is hard to find/sold out should not be a surprise. I suspect a LOT of things people want are sold out right now.