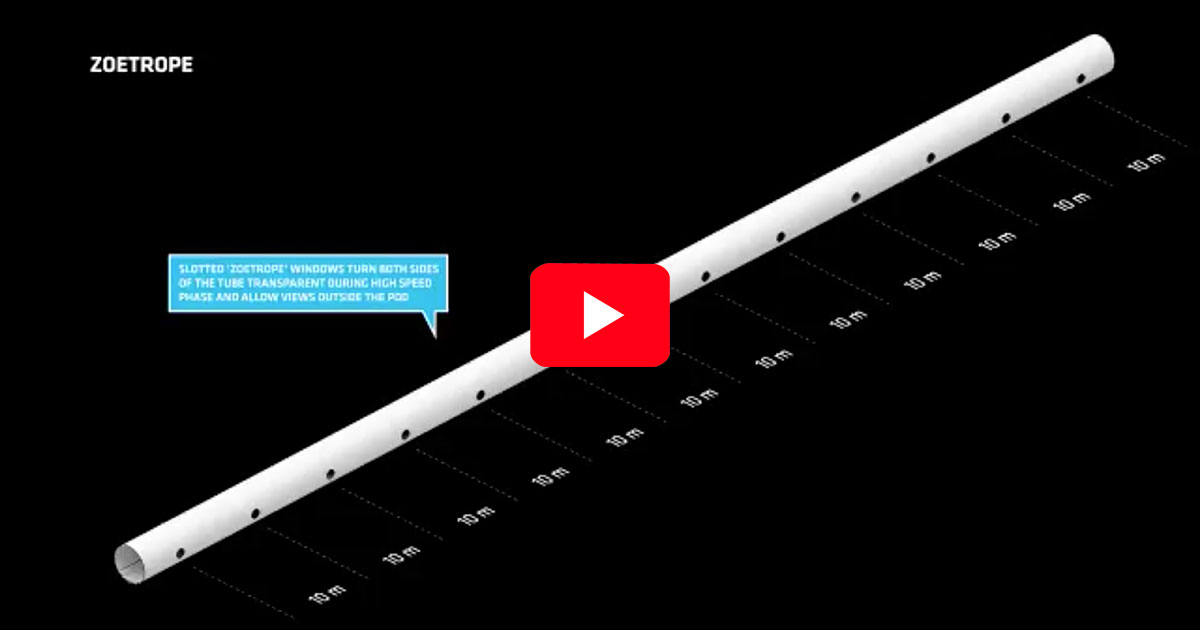 Elon Musk’s Hyper loop company has proposed using a 19th century technology called a zoetrope to make its high-speed tunnels appear to be transparent. It’s a clever idea, and here’s how the Hyperloop zoetrope would work.

Zoetropes were invented in 1834, and were quite the fad later in Victorian circles. The idea is that a progression of figures were drawn or painted on the inside of a wheel. Using either mirrors inside the wheel or holes on the outside of the wheel looking in, the viewer’s field of view was limited to just one of those figures. Spin the wheel, and boom! Magical animation! Call it Moving Pictures v. 0.1.

Pixar Does Everything Right

In fact, let’s cut to this amazing Pixar zoetrope from 2010 that I’d never heard about until I saw it in a TechCrunch article about Hyperloop’s announcement. Pixar created a zoetrope that uses a strobe light to control your field of view, making for a much larger animation effect. Here, check it out:

Cool, right? Well, that’s the principle Hyperloop is proposing, only rather than a wheel, they’d put portholes in their above-ground tunnels. Those port-holes would be spaces such that at 1,200 kilometers per hour (~745.6 miler per hour) it would deliver a similar effect, making the tube appear to be transparent to those inside.

The company whipped up a simulation of how this might world, and it’s super cool:


Separately, the company made a shorter video with some of the technical aspects of how it would work:

How slotted ‘zoetrope’ windows could turn both sides of a hyperloop tube transparent, allowing views outside the pod. #BiennaleArchitettura2018 @BjarkeIngels pic.twitter.com/2aGGnMJgqv

Not Just for Advertising

This idea isn’t entirely new, but in an oblique way. Several subways around the world have used the zoetrope effect to turn subway tunnels into ad space, and thee’s probably some above-ground trains doing something similar, too.

The New York Subway did an art installation of 228 panels in the Q tunnel in 2013. Here’s what that looked like:


This is just something being kicked around by the Hyperloop peeps, and the Hyperloop itself is still in the proof-of-concept stage. Whether or not the world’s biggest and realest zoetrope ever becomes a thing, it’s an interesting idea.

I first saw this concept in action when I was in Beijing, China this past April. They are using it for advertising, and with actual screens rather than static images. But it was interesting to see how marketers will use every possible way to invade our consciousness.