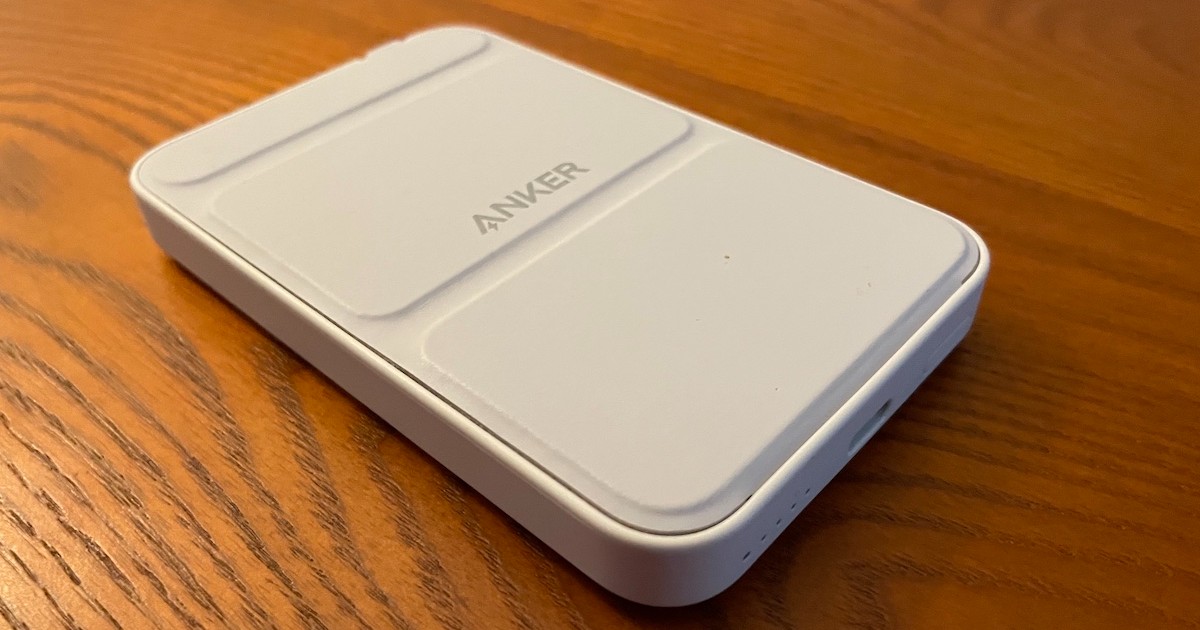 The Anker 622 Magnetic Battery (MagGo) is a wireless portable charger for iPhone 13/12. Featuring 5000mAh of power at a 7.5W charging speed, the Anker 622 is built for use. It comes in a variety of colors, from Dolomite White, Interstellar Gray, Buds Green, Misty Blue and Lilac Purple. It charges via USB-C, and the back includes a foldable kickstand that allows the device to prop upright.

For this review, I took the Anker 622 with me for two major events. When it comes to battery life, I need a strong battery primarily for one thing: Pokémon Go. As a semi-avid player, large events require a large battery. While the game isn’t the most graphically advanced, between your screen constantly running as well as your GPS constantly running, the game is largely known as a battery drainer.

For the first test, I decided to bring the battery with me during a Pokémon Go community day event. While the event has been shortened from six hours to three hours, it was still plenty of time to see what the Anker 622 was capable of.

For this experiment, I used an iPhone 12 with a battery that is still fairly in good health (around 87% max charging). I immediately started the event with the Anker 622 attached to my iPhone. Right off the bat, I appreciated how well the battery attached to my phone.

Thanks to the MagSafe tech, the battery attached directly to my case. While the battery itself is slightly thicker than my phone, it overall did not feel uncomfortable in the slightest. While I wouldn’t want it attached to my phone all the time, it certainly would not bother me, especially thanks to the battery boost.

Using this during Pokémon Go’s community day didn’t even cause the battery to break a sweat. The 5000mAh capacity knocks the sails off the iPhone 12’s 2815mAh battery. By the end of the event, my phone was fully charged, and the Anker still had about half of its life. This is with my phone running the game with the screen on for the entire three hours of the event.

While it handled a small event, I wanted to see how the battery could handle an all day adventure.

Three hours of non-stop screen time is okay, but what about using the battery all day? For my next experiment, I took the battery with me to Cedar Point, a theme-park located in Sandusky, Ohio. The area was not only a great place to ride roller coasters (Millennium Force being the best), but is also an ample opportunity to play Pokémon Go, and thus really see what the Anker 622 is capable of.

Starting my day around noon, I began walking around Cedar Point playing the game as often as I could. With the Anker 622 attached to my phone, I gave no worries to the things that would typically kill my iPhone battery, such as playing games while waiting in long lines.

Five hours into my day, my phone was still going strong, though the Anker was starting to lose much of its juice. However, the battery no doubt would have allowed me to stay on my phone throughout the day, and well into the night. Though my adventures at Cedar Point ended early (I picked a terrible day to go), I know the Anker 622 will be my partner for the next time.

Concerning charging the Anker 622, I will give it credit for being rather fast. Though I typically do my best to charge external batteries alongside my device the night prior to needing them, charging the Anker from zero to a hundred took me around an hour and a half. This is largely thanks to the battery’s 7.5W charging speed. Which isn’t bad for a device that can handle all day use.

While the battery is rather beefy in terms of power, there are some small drawbacks. The Anker 622 uses bi-directional USB-C to charge. Now, I cannot fully fault the company for choosing USB-C, as it is something Apple should have done with the iPhone line as well. . . however, it is a nuisance that my phone and my external battery cannot be charged by the same cord. However, I can’t really fault Anker for its decision to go with USB-C.

The second problem also isn’t really a problem, rather personal preference. Personally, I am not the largest fan of the foldable kickstand that is included with the device. However, this is only because the kickstand makes the back of the battery “flat,” rather than rounded like the front of the device that connects to the phone. This is entirely a non-issue, rather, just me looking for uniformity.

Ultimately, this battery works well for me, and I think it would work well for others. When it comes to external batteries, I’m the type that needs to burn through them in a day, and the Anker 622 does exactly that.