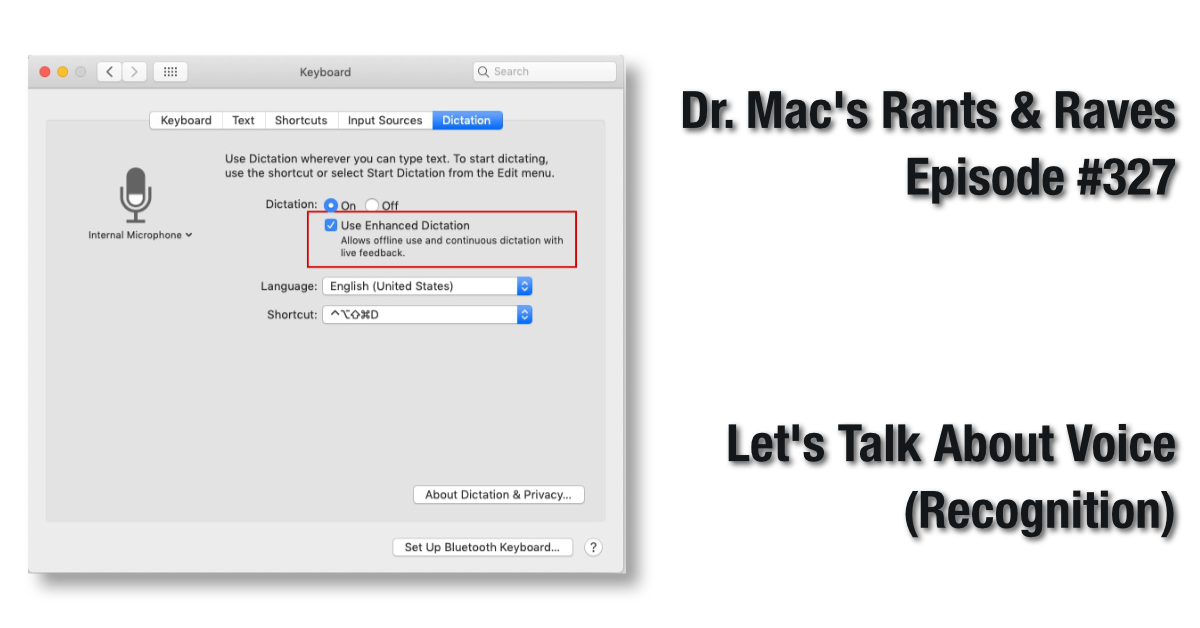 I have found three possible options to “replace” Dragon Professional on the Mac.

The word “Replace” is in quotes for a reason: Only the most expensive and odious option offers the same (or better) features as the late Dragon Professional for Mac. The other two options are decent and free, but they don’t offer features like voice training or extensive customization.

That being said, the other two options have obvious advantages: They’re both free, they both work on most modern Macs, and they’re both better than no speech recognition at all.

The most expensive and odious option (IMHO) is the Windows version of Dragon Professional (from $300) running on your Mac under emulation like Parallels Desktop (from $63.99), VMWare Fusion Pro ($40), or Boot Camp (free with macOS).

As odious as I find this option, it is the only one that compares to the late Dragon Professional For Mac feature-wise.

One of the free options is macOS Dictation, which you enable in the Keyboard System Preferences pane’s Dictation tab. This lets you dictate on your Mac in any document or field that can accept text input.

You’ll find the second free option in Google Docs, where you can select Voice Typing from the Tools menu to dictate rather than type. But… you’ll only be able to select it if you are using Google’s Chrome web browser, since it isn’t available in Safari.

I haven’t used it much but it seems to work.

For what it’s worth, I also looked at a few transcription apps and services, which convert recordings of your voice into text for a fee. While some of them translated voice to text well enough, they all charge by the word or page and require minutes (or hours) to complete translation.

There is One Last Thing…

Every speech recognition program I’ve ever used worked better and was more accurate when I used almost any decent third-party microphone or wired headset.

Any thoughts as to why the voice transcription on iPhone is so much better than the Dictation on Mac? I find that if I pause midsentence on my Mac while using dictation, it capitalizes the first word I speak after the pause. Any thoughts?

Here is anExampleWhere if I pauseThe next wordIt Is then capitalized with no space between the words. Is there a settingThat I can useThat will allow me toPauseWithout this strange, no space & capitalization happening?

I don’t know but… I agree. My iPhone is better at dictation than my Mac, (especially when I dictate using my AirPods Pro).

PS: I searched again today and found dictanote.co and I tried in (British) English and it’s doing a very good job. I’d have to try with longer texts but on the face of it, as good as Dragon. Worth trying. In French it was OK but not so good. Most languages are available and the paid version is only $3 per month. Unbeatable. There is a downloadable version but O couldn’t make it work on my mac.

I’ll have to try dictanote.co! Thanks for the feedback.

The good news is that old versions of Dragon for mac or Dragon dictate as it used to be called still work on new macs (I’m stuck with Mojave though, I don’t want to risk the 32-bit issue). I find the Mac option more or less useless and Siri on phones is just a little better but not as good as Dragon (but free). I use Nebo on my iPad which lets you mix handwritten notes and dictated notes and you can even copy and paste stuff in it and sketch things. It’s not bad, bu Dragon is still better… Read more »

I find myself dictating more and more. Mostly on iOS devices, as I have a perfectly good keyboard on my Mac. I’ve been surprised in the last six months how much better it is than it used to be. I’m finding myself dictating long paragraphs, letters even. Yes I need to go back and edit the occasional typo, wrong word, but it’s gotta be 95%+ right. The words it gets wrong are subtle pronunciation differences that I completely understand. It seems to even have a grasp of things like which there to use, and other grammatical differences. I can see… Read more »

It’s not bad on the Mac. It’s not Dragon, but it’s also not $300. I’m using dictation more and more on my Mac, and almost always on my iPhone.

I use dictation on my Mac which is much better than what I’ve seen out there other than Dragon dictation, which I used to write this comment.

I had Dragon 6.0.8 installed on my MacBook Pro before I upgraded to Mojave. I’ve now upgraded to Catalina.
Whilst Dragon for Mac is no longer supported and it is stated in various places as not compatible with Catalina, I find it is still working fine for me.
I suggest there is not (yet) a need to find a replacement.