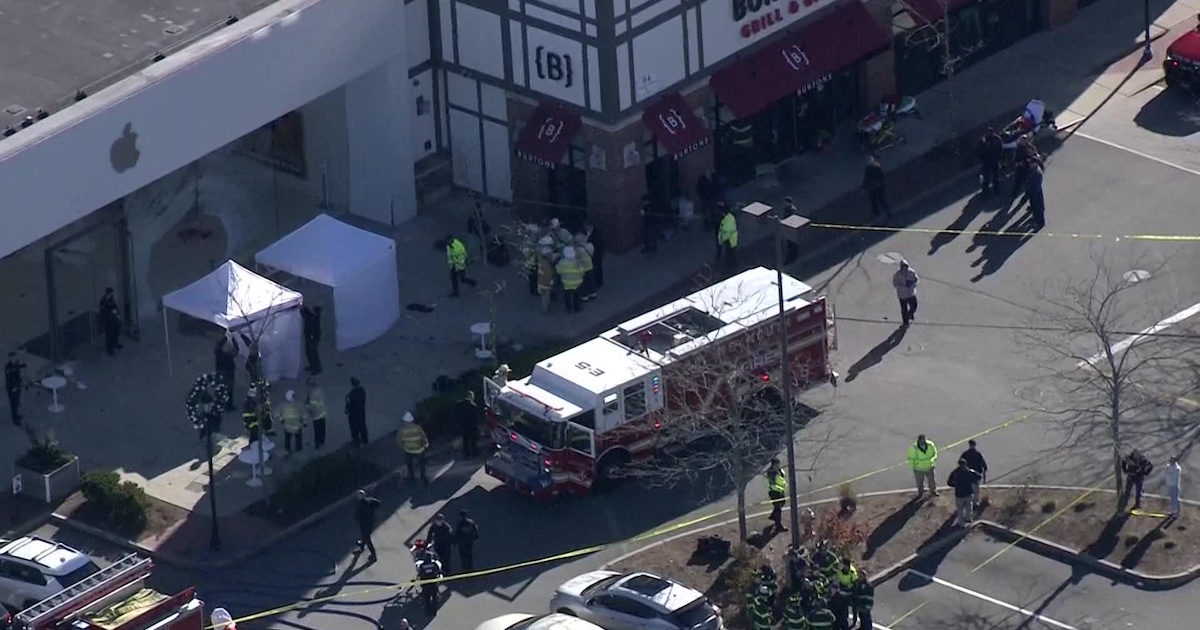 Update 1:01 p.m. ET: The Patriot Ledger reports one person has died from injuries related to the crash, and four others are in critical condition.

Update 2:06 p.m. ET: Authorities from various police and fire departments stated there were a total of 16 people transported to area hospitals and one fatality. Plymouth County District Attorney Tim Cruz stated there was an ongoing criminal investigation into the driver of the SUV. The driver, reportedly, was alert, bloodied and talking to officials. One fire marshall reportedly indicated that video footage of the incident suggests it was an intentional attack.

Update 3:22 p.m. ET: Apple has issued a statement, including details of the victim who died from injuries suffered during the incident.

The incident began at 10:45 a.m. Monday morning when a witness said a black Toyota 4Runner drove “full speed into the Apple store.” It crashed through the glass storefront of the Derby Street Center Apple Store. It traveled all the way to the back wall of the store, trapping at least four people and injuring dozens more. By mid-afternoon, the victim count listed 19 injured and one killed. According to Apple, the victim killed was a construction worker.

We are devastated by the shocking events at Apple Derby Street today and the tragic loss of a professional who was onsite supporting recent construction at the store. Our hearts go out to our team members and customers who were injured and all of those who were affected by this terrible incident.”

Located in Hingham, Mass., the store opened an hour before the incident. As of 11:49 a.m. Eastern, the Hingham Police Department was not answering phone calls or posting updates to its social media or website. However, police scanner traffic indicated South Shore Hospital in neighboring Weymouth, Mass. was rejecting additional trauma patients.

Reporters on the scene could see a large hole in the glass front of the Apple Store. Dozens of first responders were treating multiple people on the ground outside the store. Some were being placed on stretchers and taken by ambulance. Departments from neighboring cities Cohasset and Hull were on the scene, and emergency services requested a medical helicopter. The helicopter, ultimately, was unnecessary.

Victims Injured and Trapped Inside

Initially, the crash trapped at least four people inside. Reports indicate rescuers got them out. Meanwhile, first responders continued to triage the injured and offer them required medical assistance. An MBTA bus was said to be en route to the scene to be used as triage.

By shortly after noon Eastern time, tents were being erected in front of the store to help with treatment. At the time, temperatures were just above freezing , with Feels Like temperatures well below freezing. The city was also under a gale warning, so sheltering victims from weather exposure is certainly crucial.

Police had called for a tow truck to remove the vehicle, but it’s unknown at this time how far along they are in extracting it.

This is the first major emergency incident at an Apple Store since a gunman took hostages at an Amsterdam Apple Store in February.

As the situation unfolds, we will update this story.