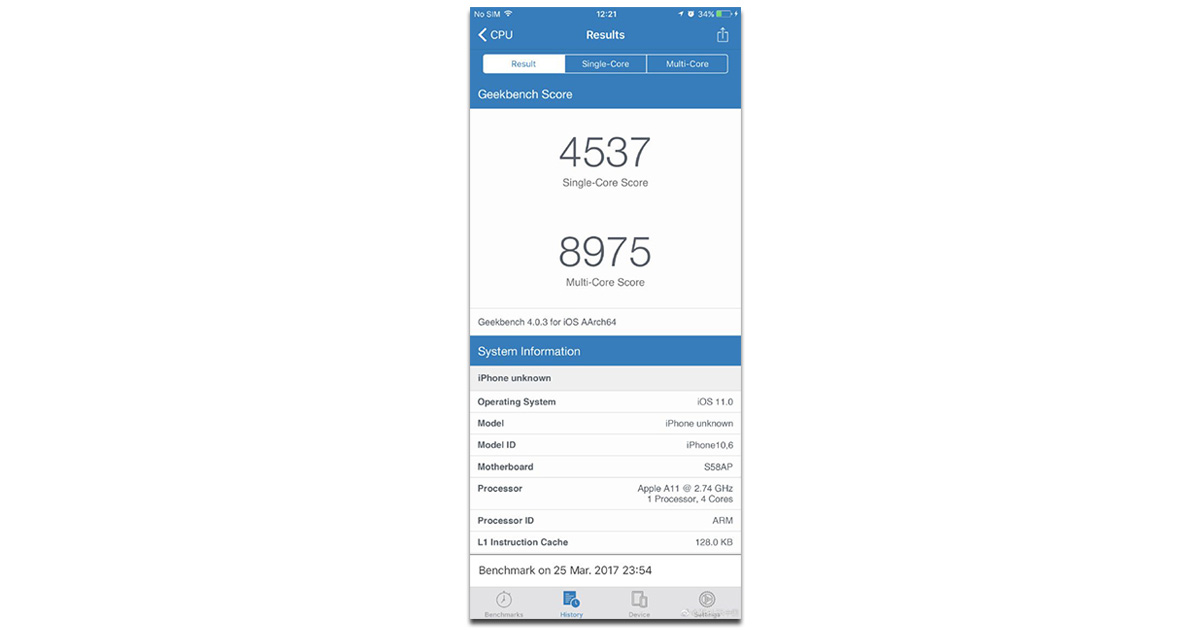 Update: 9to5 Mac confirmed the Geekbench screenshot is fake, which isn’t all that surprising.

How fast is the iPhone 8? If a Geekbench performance test screenshot that just surfaced is to be believed, it blows the iPhone 7 and Samsung Galaxy S8 out of the water. The reported results have some other interesting tidbits, too, like a really tall screen aspect ratio.

The screenshot comes courtesy of Avinashtech saying it came from the Chinese social network site Weibo. Since there isn’t any way to verify the authenticity of the screenshot or the test results, we’re taking them with a big grain of salt. That said, the numbers are interesting if true.

The display dimensions are 2800×1242 with a 20.2:9 aspect ratio. That’s an odd size compared to other smartphones, but seems plausible since Apple is supposed to ditch the physical Home button to make room for a bigger screen. In comparison, the Galaxy S8 screen size is 2960×1440 with a 18.5:9 aspect ratio.

Assuming these test results are legit—and that’s a pretty big leap at this point—the iPhone 8 is shaping up to be the best performing smartphone on the market. Still, it’s easy to fake screenshots, and benchmark tests don’t always equate to real world performance.

The iPhone 8 is expected to debut in September along side the iPhone 7s and iPhone 7s Plus at an Apple media event. Reports say it’ll ship several weeks after the 7s and 7s Plus, os it looks like we have a while before these Geekbench scores can be officially confirmed.