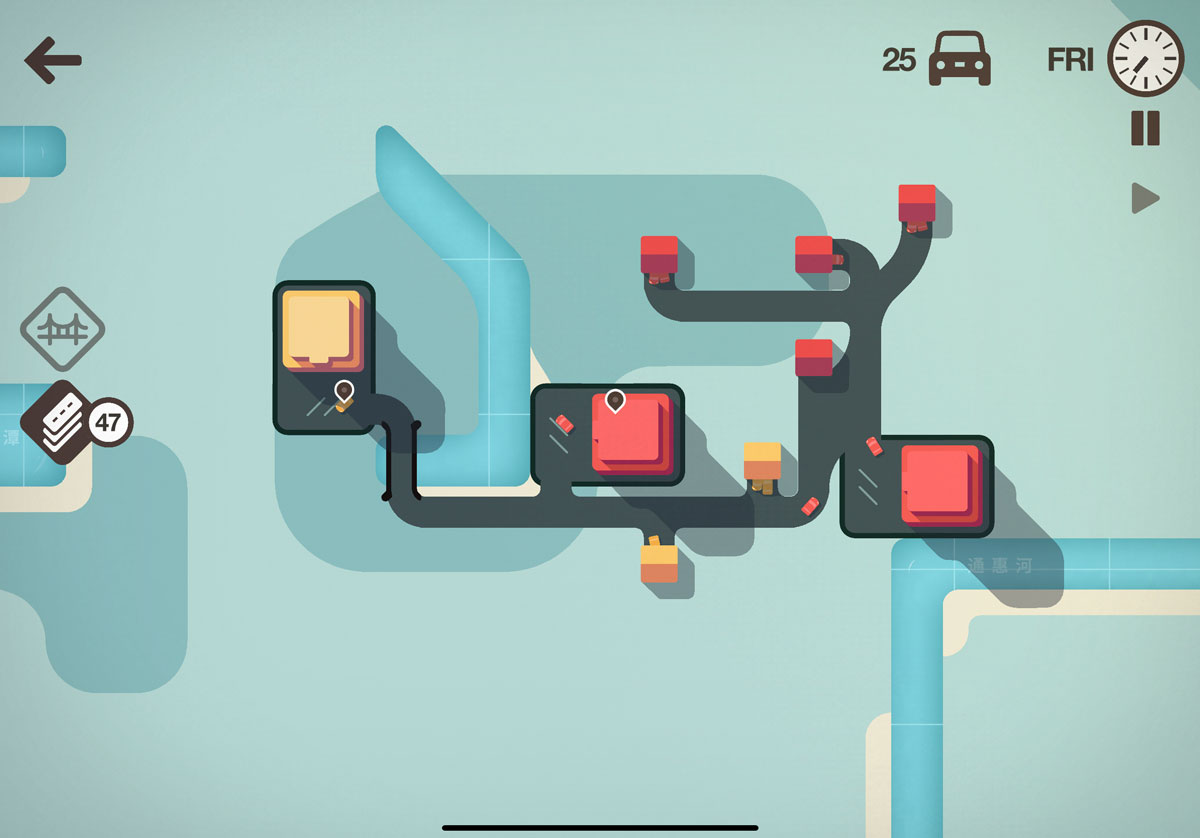 Mini Motorways is an addictive puzzle game (Apple calls it a strategy game) that I’ve found difficult to stop playing. It’s easy to learn and hard to master; each game takes roughly 20 minutes; it has a beautiful and mesmerizing music machine for a soundtrack; it absolutely has that just-one-more quality. In short, it’s a great game and a terrific reason to subscribe to Apple Arcade.

Apple Arcade—or just Arcade—is Apple’s brand new game subscription service. It launched on Friday with 30 different game, with many more coming, all for $4.99. There are multiple categories, and all of them appear to be family-friendly fare.

Mini Motorways is a puzzle game. I thought it was a racing game from the name, but a friend of mine said she couldn’t put it down, and now here we are.

The premise of the game is simple. There are buildings, the large blocks in the screenshots above and below. They provide demand for cars. Houses, the little blocks, provide those cars. Only, red houses send red cars to red buildings and nowhere else, and the same is true for the other colors. Each car needed is represented by a pin on the big building, and if too many pins build up, you lose.

Your job is to draw roads that connect and facilitate all that traffic. It’s almost like some train routing games I have loved in the past, but this game takes it up a few notches.

Oh, building and home placements are random and without reason. That’s kind of like real people in real cities in real life! The same is true for parking lot entrances on the buildings. You can’t move them or control which direction they go. You can change driveway placement on houses just by drawing a new one, but you can’t change when or where the houses appear.

Your score is simply the number of pins you complete.

If all that sounds simple, it isn’t. I mean, it’s easy to play. It’s hard to get high scores, which is a great combo.

Here are some tips for playing Mini Motorways:

Buildings appear random. Get ready to curse. Building placement and orientation is random. Sometimes they will even appear and places where you simply can’t connect them to a road. I’ve experienced that several times, and the only thing you can do is play a new game. Which I do.

Bridges, Stoplights, and Motorways (highways): these special tools are available in limited supplies, and you’ll be given periodic opportunities to get them, but you’ll have to choose between two when you do get them.

It’s in the name, Motorways are a key element. They allow you to connect one part of your city to another, going over all buildings and roads in their way. Learning how to use them will take experimentation. I suspect there is no one perfect way to play, and that every player will find a strategy that works best for their brain.

I haven’t figured out how to effectively use stoplights yet. You place them by dragging them from your inventory to the spot you want, but they don’t seem to improve my traffic hotspots.

There is no monetary budget. Building and destroying roads costs nothing, but you have a limited number of road units, so build wisely and tear down as soon as you realize you want to change something.

Cars don’t crash. Unlike the real world, there are no traffic accidents. Play accordingly.

By the time you see the problem, it might be too late. When a building starts chirping at you, it’s probably too late to fix the problem. So, keep a close eye on buildings before they get build up too many pins.

Build roads when the game is paused. New buildings and houses appear every minute or so, sometimes faster. Pause the game when you’re ready to build a new road. Nothing is more annoying than planning a road and having a new building appear right where you planned—and needed—to go.

You can change the driveway directions on houses. As noted above, you can change which side of a house a driveway is on any time, but you can never change the entrances to building parking lots. If it makes sense to change a house’s driveway, just draw a new one.

Use the delete feature to remove unwanted roads. Sometimes you’ll make a road you don’t need, or new roads will obviate old ones. You can delete road tiles whenever you want. They won’t be returned to your inventory until any cars that were already planning to use them has completed its journey.

Mini Motorways is available in Arcade in the Strategy section. Arcade requires a $4.99 per month subscription. There are no in-app purchases for Mini Motorways (or any Arcade game).

Addictive, fun, aesthetically-pleasing graphics, a great soundtrack, that just-one-more quality, easy to learn, hard to master, and every game is imminently replayable. Over and over again. Goodbye dear time!