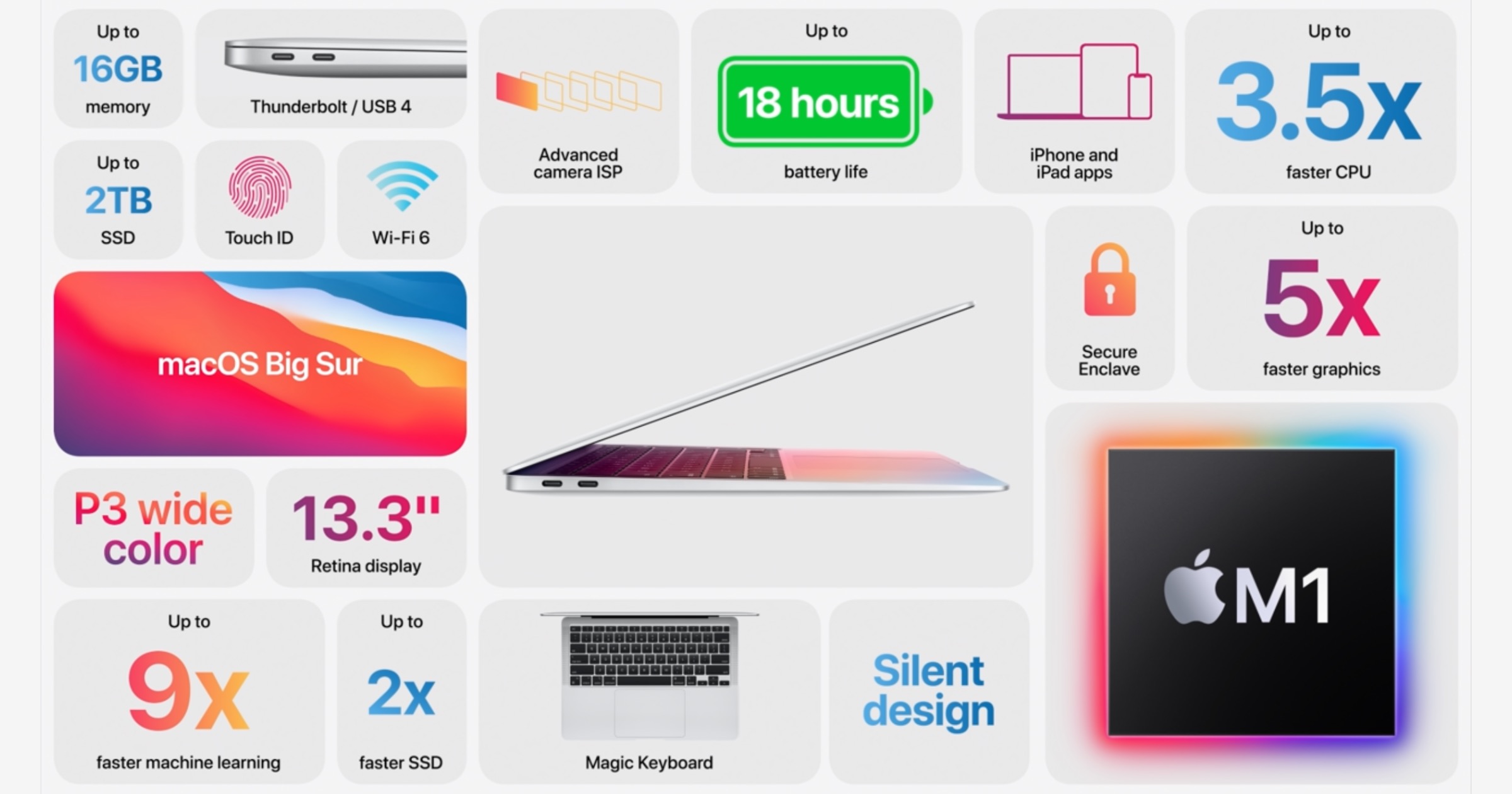 I was fortunate enough to receive my built-to-order M1 MacBook Air (16GB RAM, 512GB SSD, 8-core GPU) last Tuesday, and I’ve had a week to truly experience it. We’ve all read the early reviews (Snell, Gruber, and Bohn are the highlights), and they’ve focused on the specs and the highlights, so I won’t rehash (much of) that here. What I want to focus on are the little things.

Through and through, this is a Mac. It looks like a Mac (exactly the same case as the prior, 2018 Air), it acts like a Mac, it runs apps like a Mac, and I can use it like a Mac. Mostly. But there are a few things that stick out as major differentiators from any Mac I’ve used in recent years.

I’m a geek, so I set this up two different ways. First, I just followed out-of-the-box momentum and set it up as a new Mac, just to get that enencumbered experience. That was fine, but after a day or so I decided I really didn’t want to have to rebuild everything again, at least not right now. I added a volume (thanks, APFS!), booted into recovery, and installed a second copy of Big Sur, this time taking the Migration Assistant path to slurp over my previous Air’s environment.

That Big Sur installation said it would take about an hour, so I (gently) tossed the M1 Air on the couch here in my office and went back to my desk to get some other work done. I realized I tossed it down onto a blanket and my initial reaction was, “oh, that’ll get too hot during an installation like this, I need to move it.” And that’s when I had my first real moment of, “no, things are different now,” pause. If I were doing the exact same thing with my iPad Pro, I wouldn’t hesitate to leave it on the blanket.

I left it exactly where it was and checked on it 30 minutes later. The Air was barely warm to the touch, and the install was nearly complete.

Over general use I have found the same thing: it never cooks my lap, and obviously I never have to worry about the fans getting loud since there are none. This is a little thing, but is a fundamental change for us all. Thank goodness.

As a Mac user, a geek, a troubleshooter, and one who helps others with such things, I realize I have memorized about four zillion different startup key combinations. With Mac Geek Gab, we are constantly linking to different Apple support articles teaching folks how to do these things.

Those days are gone. With the M1 MacBook Air, I simply need to hold down the power button and I am presented with a menu. From there I am presented with an Options scree. I can choose my boot disk, I can launch Recovery Mode, and more. A little thing, for sure, but man does it make troubleshooting easier!

There has been much hand-wringing about the fact that the camera is still only 720p, and should be at least 1080p or 4K. I don’t disagree with this, and my guess is that once Apple creates their first, new shell for an M1 laptop, we’ll see them make room for such a thing. For now, though, that 720p camera has one major differentiator: it captures at 30 frames per second (fps), whereas all prior ones captured at 15fps. On Zoom calls, the frame rate is the biggest differentiator between “natural” and “choppy”. A little thing, but an improvement, and I look forward to more in this area.

It always perplexed me (and still does) that Apple shipped the 2019 16″ MacBook Pro with a Wi-Fi 5 chip in it when previously-released iPhones had Wi-Fi 6. Now, included with the M1, is a chip capable of Wi-Fi 6, and it is glorious. Downloading software and updates over near-ethernet speeds without the need for ethernet cables makes a big difference. Using the new, eero Pro 6 and a Comcast/Xfinity “Gigabit” connection, I was able to see 70-80MBps sustained downloads when in the same room as the access point. Finally.

When I first booted from my fresh, Migration Assistant installation, I noticed a few of my startup apps didn’t launch. It was the first boot, so I just went and began launching them. Immediately I realized why: my Mac told me I needed Rosetta for these apps to work, and offered to install it. That installation took all of about 10 seconds, and then my apps launched perfectly. 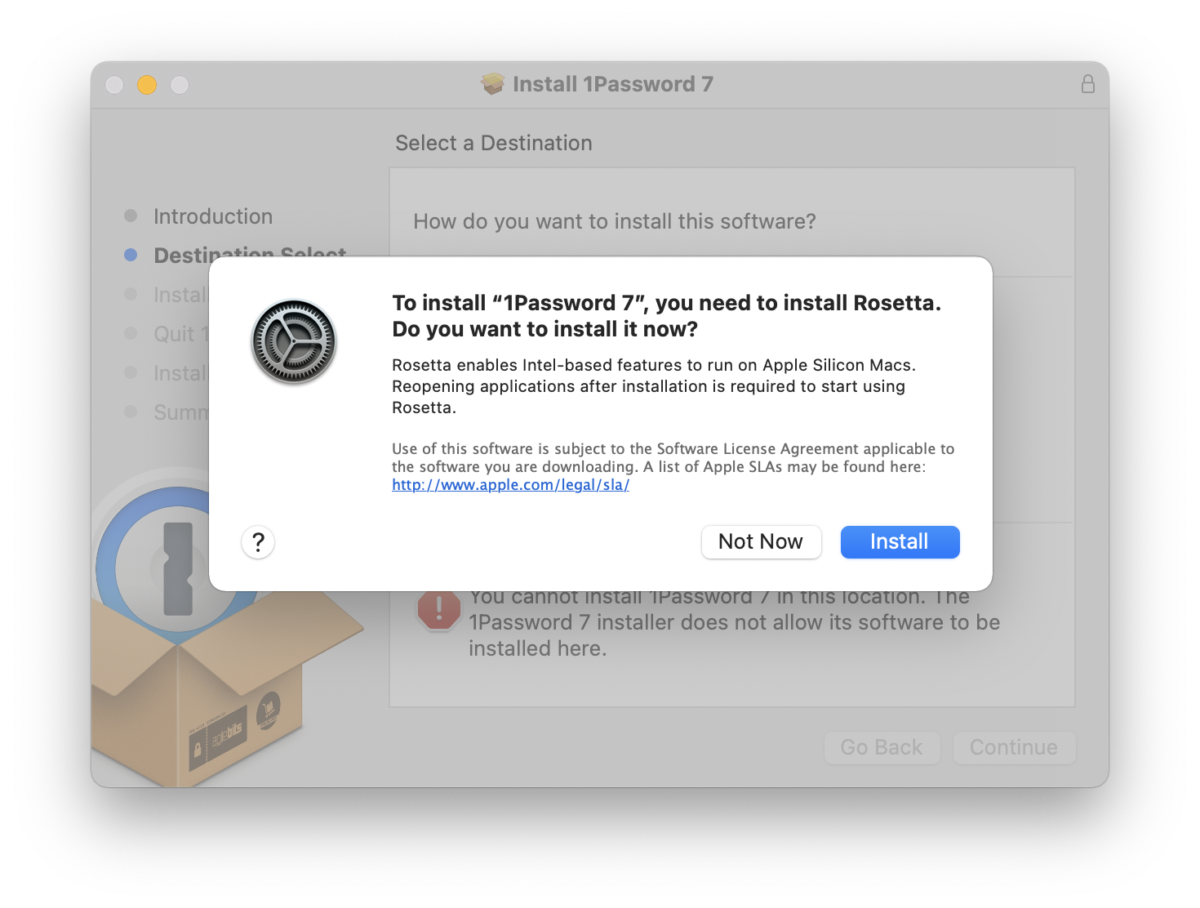 Rosetta is interesting because, when possible, it does the Intel-to-Apple silicon translation once, at first launch, and then uses the cached result for all future launches. I was concerned this might cause a large delay, but my Air proved that concern unwarranted: There might be one extra “bounce” of the app icon the first time, and nothing more. Truly, it was nearly imperceptible on first launch of any given app. Obviously all subsequent launches happened even faster.

For the most part, I am (happily) unaware of the fact that I am running a non-Intel CPU in this machine. Sure, this machine is (way) faster than a MacBook Air ever deserves to be–and I happily notice that–but in terms of running the apps I want or doing the things I need, I have almost no indication anything else is different.

I have run into three scenarios, however, where the M1 chip has caused me to implement interesting workarounds, all of which have been similar in the end. These three apps/environments don’t officially support Apple silicon:

I didn’t include Windows Virtualization/Emulation, like Parallels, VirtualBox, or Fusion, simply because I don’t have any use for these on my laptop right now. If I did, these would be in the “currently fails, need to wait for an update” category, along with Loopback and Audio Hijack. 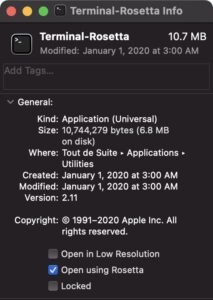 The solution for my three (Ok, really just the first two), were the same: find a way to run them inside of Rosetta. You see, the problem is that Terminal and Mail are Universal apps, and that means they run natively on my M1 Mac. But when things that run inside them aren’t yet native (like all my Homebrew packages and my Mail plug-in), those things fail. Mixing modes like this evidently is a trick that Rosetta doesn’t (yet?) know how to do. No worries, there’s a workaround.

All Universal apps, including those shipped from Apple with macOS, have a checkbox in their Finder > Get Info window to “Run in Rosetta”. I solved these problems two different ways:

Along these lines, though, I’d like to point out how many apps I have that are already Universal (meaning they’ll run natively on Intel and Apple silicon). Even freeware apps like coconutBattery and TimeMachineEditor had native versions available before my MacBook Air ever arrived. For many app developers, this truly is a simple process in Xcode to make one’s app Universal, and kudos to Apple for the hard work it took to make that a reality.

Yes, I’ve run a few iPhone/iPad apps on my Mac. Yes, it’s cool to say I did that. Like Flash, though, I haven’t found any reason why I would want to continue doing so at this time.

I think, though, that this is simply the foundation for a future path. This now easily allows for a world where developers can make one “Universal” app (thanks, Apple, for multiple uses of the same word… again), which runs on iPhone, iPad, and now Mac. If developers build for this, creating screens and user-interface elements to match the running environment on-the-fly, then this starts to make a lot of sense. I look forward to seeing where this goes.

By and large, I’m able to use my M1 Mac like a Mac, and I think you’ll find the same thing whenever you get yours. Unless you have a very specific use-case like some of the ones I mentioned above, compatibility really isn’t an issue, and we’re barely a week into these things being available in the wild. It’s only going to get better. Kudos to Apple for managing this rollout as well as they have, and kudos to the extended ecosystem of developers and such for adopting things as quickly as they have.

The Mac is back on the front burner, and I’m loving it!

3 thoughts on “Apple’s M1 MacBook Air: One Week In, It’s the Little Things”