Customers can ask Eno questions about their checking and savings accounts using a text interface. Examples might include “What’s my balance?” or “How much credit do I have?”

Eno—”one” spell backwards—is a natural language chatbot that people interact with through texting. The bank found that when it sent out automated fraud alerts through SMS, customers thought that the sender was human and started interacting with it. Ken Dodelin, Capital One’s vice president of digital product development, said “We kind of launched a chatbot and didn’t know it.” (via FastCompany).

This is remarkably different than other brands that launch chatbots through platforms like Facebook Messenger and Skype. Capital One believed Facebook has too much access to peoples’ private information, which could run into trouble with privacy laws U.S. financial institutions work under. When a brand has a Facebook Messenger bot, any Facebook Page admin can access full transcripts of the bot’s conversations. Admins could potentially view the personal banking information of customers. 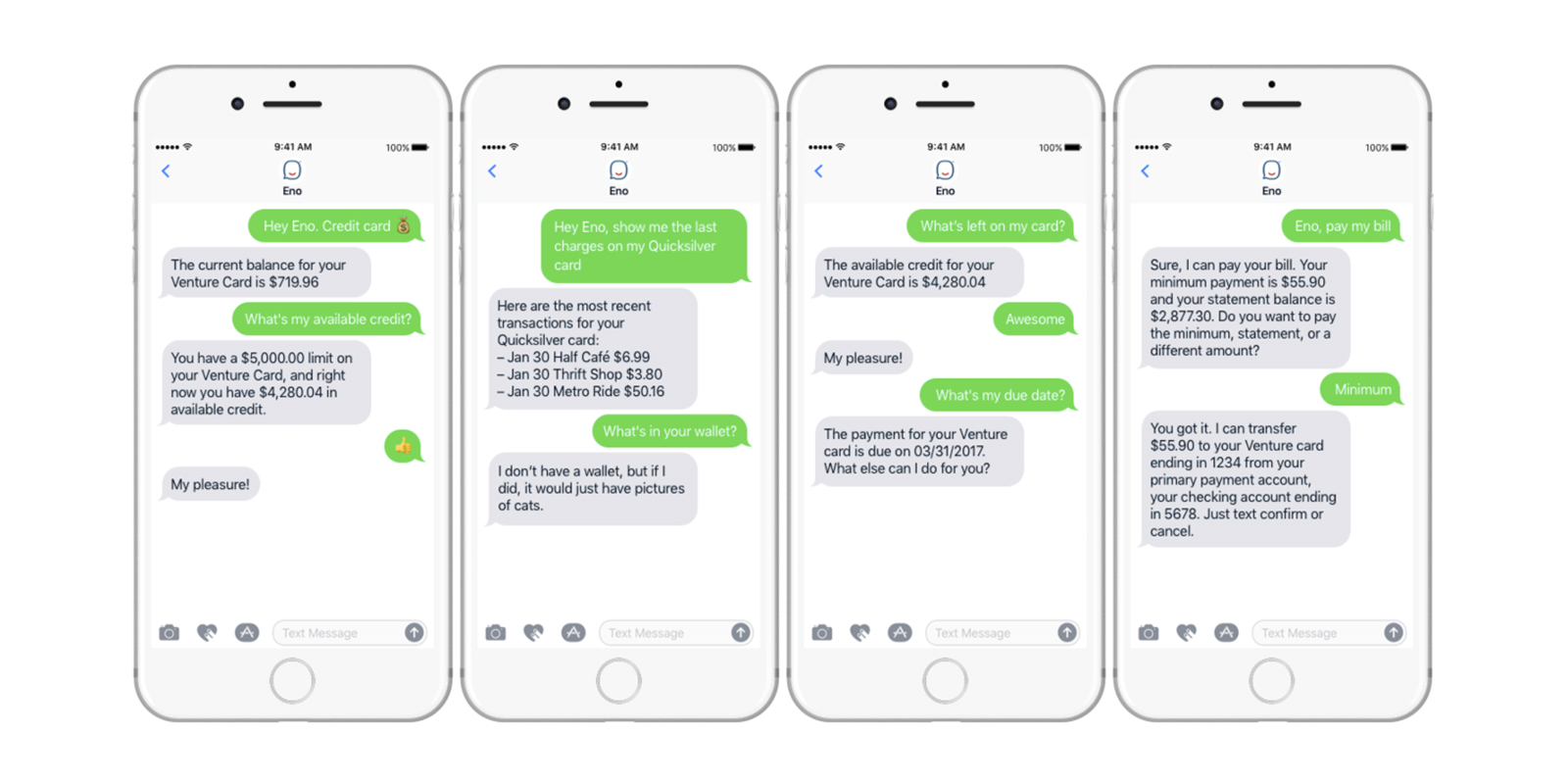 A glimpse of Eno’s texting UI

Why NLP Is Important, But Difficult

Devices like Amazon Echo and Google Home have a limited amount of processing power. Each device is powerful enough to activate when it hears a certain command, like “Hey Alexa,” or “OK Google.” But complex questions are sent to cloud-based servers Amazon and Google operate. Your voice recording is sent to the servers, processed, then sent back to fulfill your command.

In an interview with Steven Levy, top Apple executives assured us that AI is at the forefront of Apple’s technological growth and well established in the Apple ecosystem. According to Apple senior vice president Craig Federighi:

We hire people who are very smart in fundamental domains of mathematics, statistics, programming languages, cryptography…It turns out a lot of these kinds of core talents translate beautifully to machine learning. Though today we certainly hire many machine learning people, we also look for people with the right core aptitudes and talents.

Something else unique about Eno is that Capital One specifically decided to make it gender neutral. TMO‘s John Martello explored this in his piece The Thinking Behind a Female Voice for Siri. Why are many artificial assistants like Cortana and Alexa given female voices and pronouns? Is it an example of the rampant sexism in Silicon Valley or a deeper issue? As an example, John mentioned “Bitching Betty,” a slang term given to certain aircraft warning systems by pilots.

When you ask Eno if it’s male or female, it will reply that it is “binary.” Ken Dodelin said this was deliberate due to recent criticism around female virtual assistants ( via Reuters).

Right now, Eno is a pilot program and only available to a limited number of customers. Capital One said it will eventually involve more people in its testing. You can sign up for the Eno waiting list, which requires your name, email address and mobile carrier. If you change your mind, you can text the chatbot “Unenroll” and it will disable Eno for you.

As this sort of thing takes over, and it will, call centers will go the way of telephone switchboard operators. Dustbin of history. This is what that we mean when we talk about robots taking people’s jobs. Not androids like Data, but specific, AIs or specialized devices that do a few things very fast and perfectly every time. Once robots take over a job class those jobs aren’t coming back either. It will always be cheaper to run a few servers for Eno than to have a few dozen live people on phones to answer questions. It will always be… Read more »