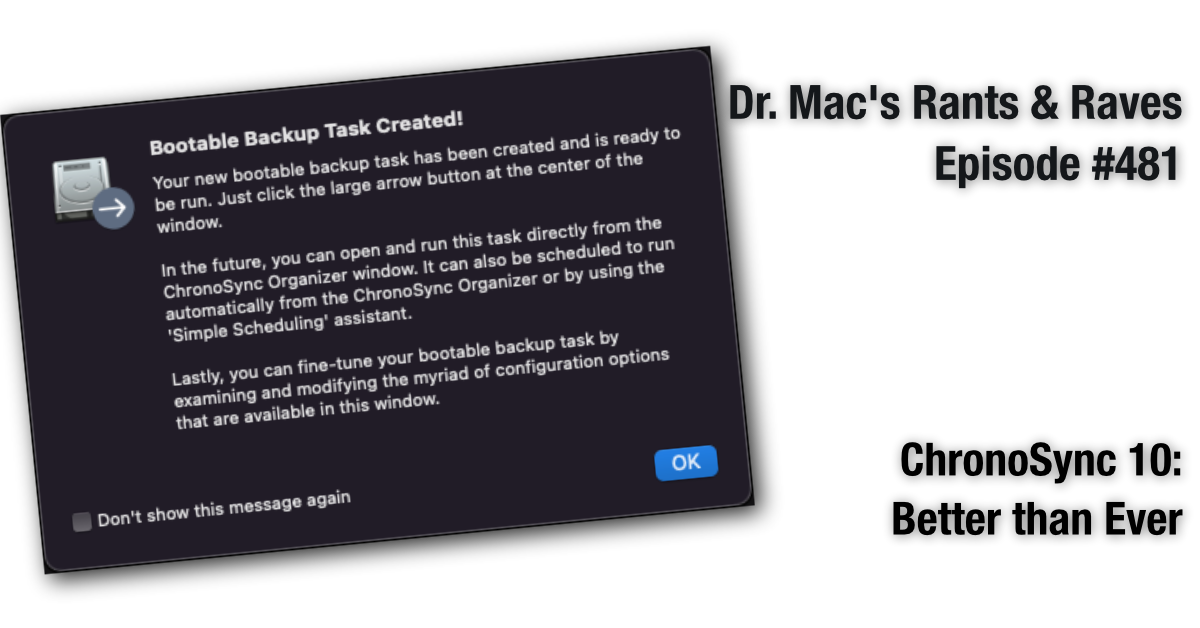 Econ Technologies recently released version 10 of its venerable ChronoSync utility, and it’s easily the best version yet, chock full of new or improved features. ChronoSync is (and has always been) a complete solution for backing up files, folders, and disks, creating bootable backups, and synchronizing pairs of folders (or disks) to keep them identical.

Cloning: Not Just for Sheep

Let’s start with cloning. As you know, I recommend redundancy, with multiple backups and at least one of them stored in a different location. And, at least for me, I’ve always maintained a clone as one of those redundant backups.

A traditional backup stores a copy of every file that has changed since the last backup; a bootable clone is a precise snapshot of your startup disk at a specific point in time.

My bootable clone drive—a 1TB Samsung S7 SSD—is updated automatically every night at 2 a.m. Then, if something goes horribly wrong with my Mac, I can grab my clone drive and connect it to almost any Mac, getting back to work in mere minutes with all of my documents, applications, and utilities (as of 2 a.m. the previous night) right where I expect them.

Recovering from a disaster using my clone allows me to get back to work in mere minutes. If I had to restore from a traditional backup, I’d have to either find another Mac (or troubleshoot and repair the one on my desk), erase its drive, install macOS, and restore from a backup, all of which could take half a day or more.

ChronoSync 10 makes creating a bootable clone easier than ever. But that’s just one of its talents. It can perform traditional backups to various destinations, including external drives and remote destinations, including Amazon S3 and Backblaze B2. Furthermore, you can back up (or sync) to any Mac running ChronoAgent ($14.99) over your local network or the Internet.

Finally, here are three more reasons you should consider ChronoSync 10 (and ChronoAgent).

Both apps offer free trials with no credit card required, and both include free support for life, including guides, tech notes, videos, FAQs, release notes, and more. Finally, Econ is well-known for offering “free updates for life.” So, unlike many apps, you buy it once and get to use it forever. For the record, ChronoSync has been updated over 70 times since 2002 and has never had an upgrade fee.

I’ve used ChronoSync for more than a decade and have always found it reliable and robust. Version 10 is no exception. If you’re looking for a versatile, reasonably-priced solution to most (or all) of your backup needs, look no further than ChronoSync 10.

So, why not grab one or both “no-credit-card-required” 15-day trial versions and see if you can take your backup game to the next level.

3 thoughts on “ChronoSync 10: Better than Ever”