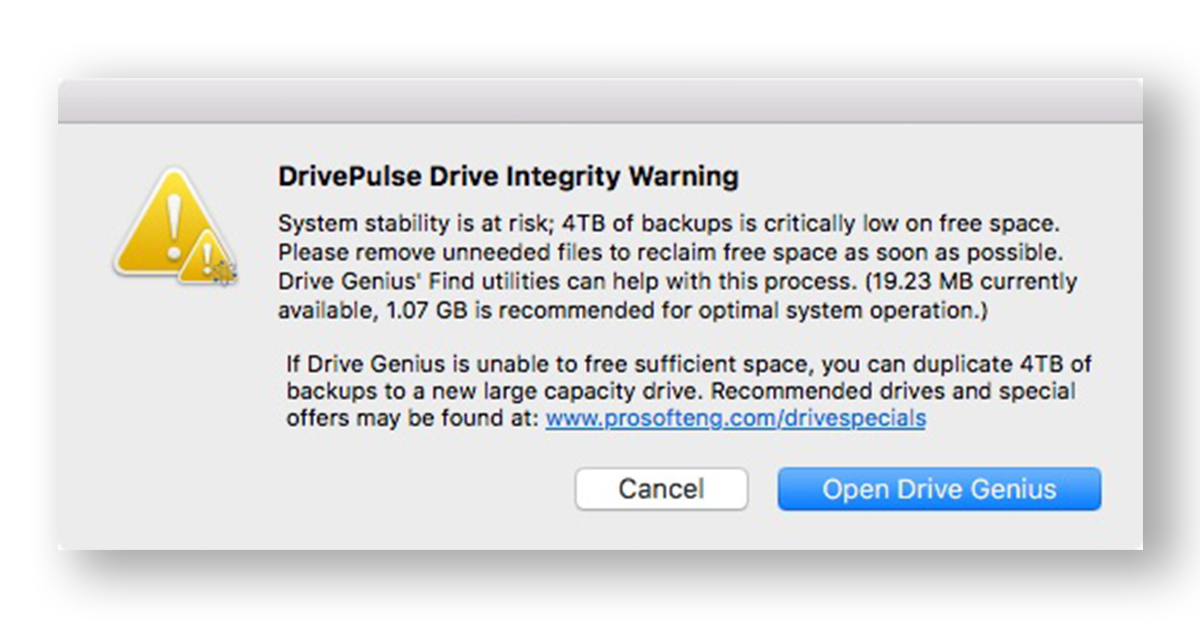 As I mentioned last week, Drive Genius’s DrivePulse real-time monitoring is its best feature (at least in my not-necessarily-humble opinion).

As you may recall, Drive Genius’s DrivePulse monitors the health of all connected drives and detects potential data corruption. Then, it can alert me of physical or logical issues with any of my drives before things go to hell in a hand-basket.

According to Prosoft, Drive Genius 5 can even predict drive failure before it occurs. I don’t know that I’ve seen this yet, but I believe it.

Anyway, since I wrote last week’s column, Drive Genius 5 alerted me to yet another disk-related issue I was having but didn’t know it, and then helped me resolve it before it caused problems.

The other day I received two alerts that one of my backup drives (named “4TB of backups”) was low on free space.

The onscreen alert a few minutes later was worded a bit more strongly:

I then used Drive Genius’s Find Duplicates and Find Large Files utilities to find and remove nearly 1TB of duplicate and large files. The scan took hours but it ran in the background, so it didn’t interfere with other work on my Mac.

But, Drive Genius does much more than just monitor your drives for issues before they become problems. It also includes utilities for cloning, securely erasing, repartitioning, and initializing hard or solid-state drives. There’s also a malware scanner, as well as both physical and consistency checks for your disks.

If you have a rotational (i.e. hard) disk, there is a defragmenting utility that can improve overall performance, boot time, application launch times, and how quickly large files open.

Drive Genius also monitors your startup disk for system changes during login and notifies you if a change occurs (this is a common vector for malware).

Finally, Drive Genius can almost always repair or rebuild a damaged disk after it alerts you of the issue.

Drive Genius also fixes directory damage. It might or might not do it better than DiskWarrior, but in my experience over the years they both do a great job, but Drive Genius also does much more:

Since both are priced at $99, you’re probably going to only buy one, and Drive Genius delivers more bang for your buck.

Drive Genius has proven its value time and again by alerting me to potential problems I’d otherwise be oblivious to, and then letting me repair the damage and get back to work as quickly as possible.

It’s one of the first apps I install on a new Mac because the thought of DrivePulse NOT monitoring my attached disks 24/7 scares me spit-less.