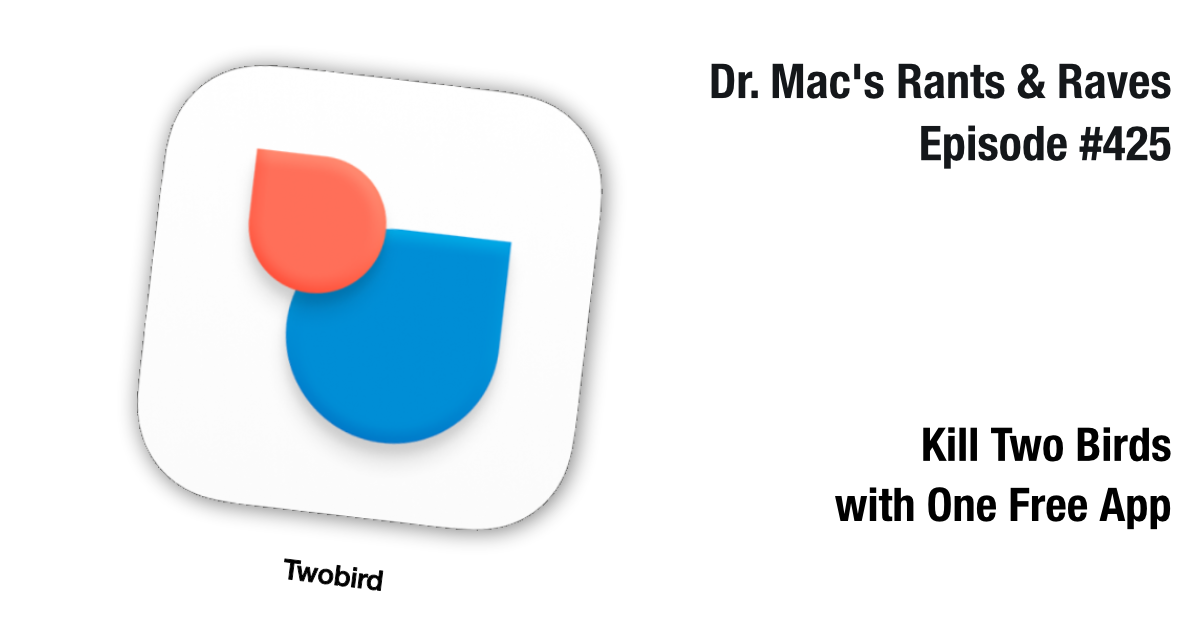 I have no issue with built-in apps included with macOS. But while there is nothing particularly wrong with the bundled apps, I’m always looking for third-party replacements that perform better, faster, or more elegantly than the Apple offerings. For example, I prefer BusyCal to Apple’s Calendar because it offers a multitude of features not found in Apple’s offering.

I’ve used a variety of third-party to-do lists, web browsers, Notes-like apps, and word processors over the years, but I had yet to discover a Mac email client I preferred over Apple Mail.

Then, a couple of weeks ago, I started using Twobird, a free email client from Ginger Labs (creators of Notability, my favorite iPad note-taking app). But calling Twobird an email client does it a disservice. The Twobird website proclaims, “Your inbox is a to-do list. Twobird makes it the only one you need.”

And that may well be true. In addition to being a full-featured email client, Twobird also lets you manage reminders, calendar events, and notes in its single uncluttered window. It also includes useful options you won’t find in Apple Mail including my favorite—a “snooze” button that lets you postpone any email message (or reminder or event) for any number of hours, days, or weeks.

Another useful touch is the unsubscribe button that appears on most messages from mailing lists. While it rarely succeeded at unsubscribing from the list, it solved the problem by creating a new mailbox (called Unsubscribed), and automatically moving messages from unsubscribed lists to it.

After just a couple of weeks of training, most of my unimportant mail is automatically moved to either the Low Priority or Unsubscribed mailbox. Today my Inbox is much less crowded, and I’m spending a lot less time dealing with email.

It’s Not All Unicorns & Rainbows

It’s not all unicorns and rainbows, though. For one thing, Twobird only works with Gmail accounts and Google Calendars. If you use another email provider, Ginger Labs plans on supporting additional email services in the future, but you’re out of luck for now.

Another issue, at least for yours truly, is the lack of sorting options. I often like to sort a mailbox by sender or subject, but that’s not possible in Twobird, which sorts all mailboxes by date.

Finally, while there are plenty of keyboard shortcuts available, there’s no way to navigate a mailbox with the arrow keys. Since I have used the arrow keys to navigate mailboxes since time immemorial, I’m finding this shortcoming particularly irritating.

One more thing: Twobird is available (but not tested by me) for iOS and iPadOS.