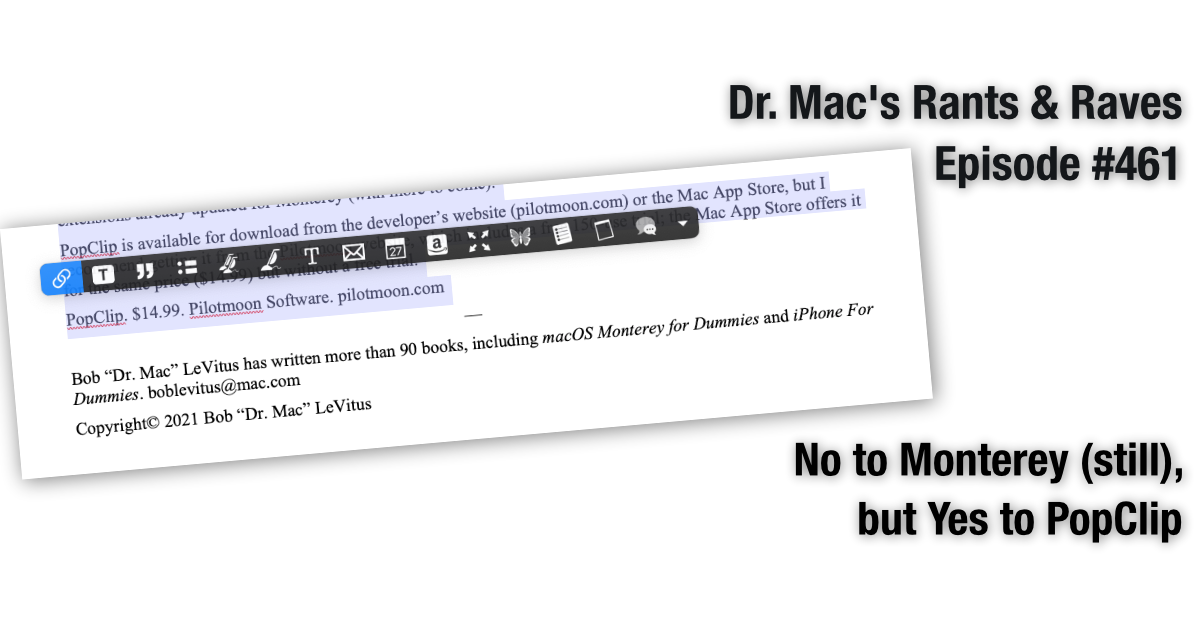 macOS 12 Monterey still isn’t as stable as version 11 (Big Sur) was (at least for me). After more than a week of almost-constant troubleshooting, many apps, including the Finder, quit unexpectedly more than under Big Sur. And the spinning pinwheel of death cursor rears its ugly head more often than before, too.

While I thought I had resolved my issues with the Photos app last week, they returned with a vengeance, and I was unable to use the Photos app on my Mac (again) until I repaired my Photos library (again). Finally, my Mac restarts “because of a problem,” several times a day, which never happened before Monterey.

I finally erased my startup disk and reinstalled Monterey, but my issues continued. So I disconnected every cable, hub, dock, dongle, and storage device, and I haven’t had a crash since. So something external (or its driver) is not happy under Monterey. I’m in the process of reintroducing devices and cables one at a time, hoping to determine the culprit. In the meantime, I strongly recommend you wait for a bug-fix release or two before you even think about upgrading to Monterey.

Moving right along, I’ve been using a time-saving utility called PopClip for quite some time, and it just keeps getting better. PopClip waits silently in the background until you select some text or summon it via keyboard shortcut. Select some text or type that shortcut, and PopClip instantly offers a customizable row of action buttons above or below your selection.

Basic actions include Cut, Copy, Paste, dictionary lookup, web search, and more, but the real power of PopClip lies in its extensible architecture and more than 200 downloadable PopClip extensions. For example, I use the Title Case, Sentence Case, Lowercase, and Uppercase extensions to quickly transform the selected text.

Other extensions I find helpful include Email, Messages, Notes, and Reminders, which create a new email, text message, note, or reminder pre-populated with the selected text. And I love the BusyCal extension, which lets me quickly create a calendar event from selected text.

Finally, I turn to the Large Type extension to display a larger rendition of selected text in the middle of my screen.

Other extensions I use include Amazon, which launches a web browser and searches Amazon.com for the words you’ve selected; Translate, which can translate selected text into dozens of languages; Calculate, which evaluates selected text as a mathematical equation and displays the solution; and Bitly, which shortens a selected URL using Bitly.com.

PopClip works with most Mac apps and is fully compatible with macOS Monterey, with nearly 200 optional extensions already updated for Monterey (with more to come).

PopClip is available for download from the developer’s website or the Mac App Store, but I recommend getting it from the Pilotmoon website, which includes a free 150-use trial; the Mac App Store offers it for the same price ($14.99) but without the free trial.

As said elsewhere, Safari 15.1 no longer saves pages using their title by default, but useless numbers or words linked by hyphens. Frustrating!

Bob: That’s useful to know.  What machine are you using?  I’m still using my old 15” 2017 MBP (still waiting for that 27” MX iMac), running on a quad-core Intel Core i7 processor, with no noticeable hiccups. The upgrade from Big Sur to Monterey was one of the smoothest ever installations. I’ve been using my 12.9” 5th Gen (M1) iPad Pro for most of my workflow (the Intel Mac is simply too slow for non-essential workflows), and reserving my MBP for specific macOS – only apps/tasks, so cannot be said to have stressed my machine.  One would have thought that… Read more »