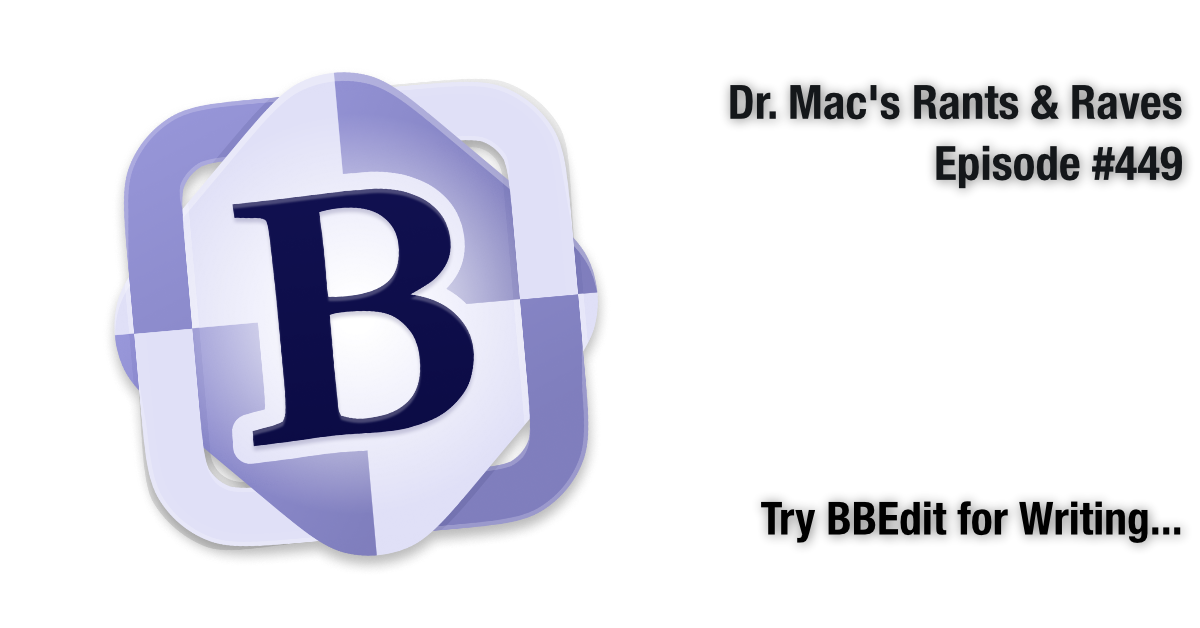 As I’ve mentioned in the past, I like to focus on writing when I write. I’m easily distracted, so I eliminate as many potential distractions as possible. I put my electronic devices into Do Not Disturb mode, close my office door, and launch my text editor in full-screen mode.

Notice that I said “text editor” and not “word processor.” That’s because I prefer composing text in a plain-text editor for myriad reasons. First and foremost, because text editors eschew formatting features like style sheets and paragraph styles, I spend all my time putting words onto the screen. I try to do most of my writing and editing in a text editor and only switch to a word processor to add formatting before saving it as a PDF or printing it.

My text editor is (and has always been) BBEdit

For as long as I can remember, my text editor of choice has been the venerable BBEdit, introduced nearly 30 years ago and lovingly improved upon and upgraded ever since. The latest and greatest, version 14, was recently released with a cool new feature I like more every day.

I’ll tell you about that feature in a moment, but first, some background on BBEdit, the most powerful, professional-grade text editor I know of on the Mac. While BBEdit is known for features aimed squarely at software developers and data scientists, it is also a terrific environment for anyone who wants to compose words without distractions.

While features like opening and manipulating huge files with ease, automatic syntax coloring of source code written in dozens of programming languages, and lightning-fast search-and-replace using GREP are useful to developers, many are equally useful when composing prose.

Now for that cool new feature I mentioned earlier. It’s called Notes, and it adds a whole new dimension to BBEdit, at least for me. Since BBEdit is open on my Mac much of the time, I often use it to jot down quick notes about the project I’m working on or anything else I need to write down immediately. The problem was when I tried to quit, BBEdit would ask if I wanted to save the half a dozen or more documents named “untitled.”

The new Notes window provides a way to create and save multiple documents quickly and easily, then automatically assigns them a name based on the first line of text they contain. Now, instead of being asked if I wish to save all those untitled documents when I quit BBEdit, all new notes are saved automatically and displayed in the Notes window’s sidebar with a descriptive (and self-generated) title.

The developer offers a generous evaluation model: Try it with all features enabled for 30 days for free, even if you’ve tried a previous version. Then, after 30 days, most features remain unlocked, or you can unlock the advanced feature set for $49.99.