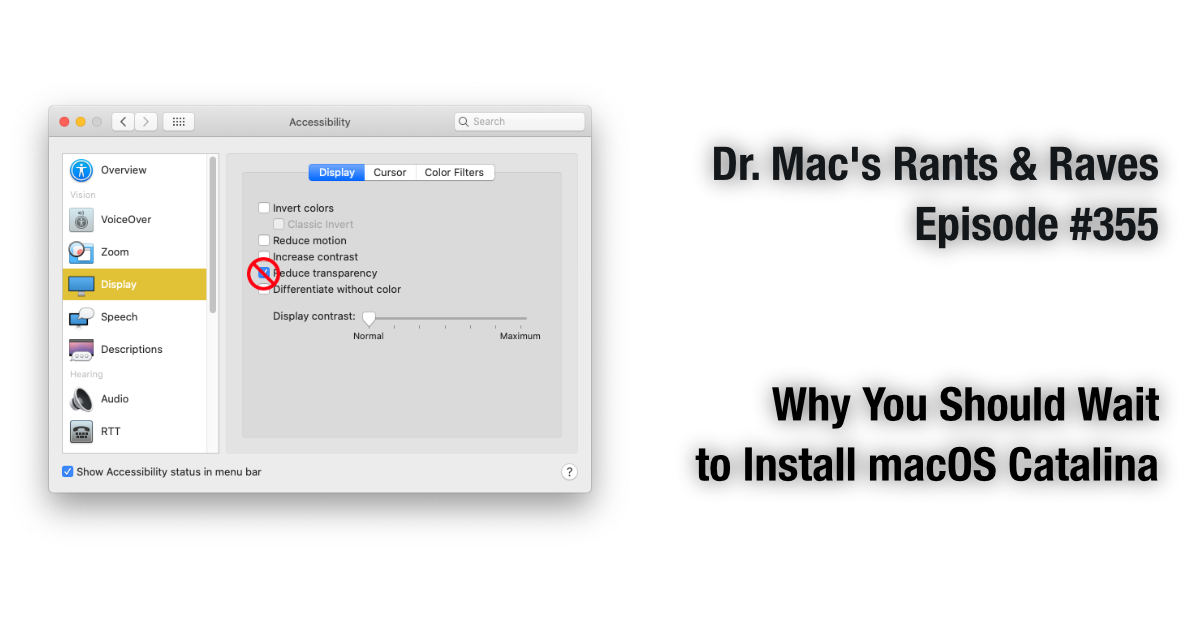 If your Mac has been pestering you to upgrade to the latest rendition of macOS, dubbed Catalina, I urge you to just say “no thank you” for the time being.

I know I wrote about this only two weeks ago, but it’s worse than I thought. Don’t get me wrong: macOS Catalina isn’t horrible, but it is causing more issues than any macOS upgrade in recent memory.

In addition to everything I told you two weeks ago, I’ve had more issues myself, and continue to hear reports of others encountering serious issues. And while Apple issued a “supplemental update” this week, I’m still having issues along with many others.

Among my complaints: The Finder in Catalina seems fragile. Mine crashes at least once a day, and as often as not, I can’t force it to relaunch. When that happens, I have to reboot my Mac, wasting a few minutes (and often longer) each time.

Another issue I encountered was that launching Final Cut Pro caused every drop-down menu in every application and the Finder to become completely unusable. Rebooting would fix the issue temporarily, but as soon as I launched Final Cut Pro again the issue returned.

I spent a few minutes searching the web and tried a couple of suggestions to no avail. I ultimately found the solution and it was something I’d never have thought of: Disabling the “Reduce Transparency” setting in System Preferences–>Accessibility–>Displays fixed the system-wide unusable menu issue.

Weird, huh? I don’t remember enabling that setting (though I might have), but more importantly, I would never in a million years have thought of it as the solution to this issue.

How Much Time Do You Have?

To be fair, I’ve also heard from a number of people who say their upgrade went smoothly and they’ve had no major issues with Catalina so far. But I suspect they are in the minority.

The bottom line is how much time can you spare if your Catalina upgrade goes south? Reinstalling Mojave from backups takes an hour or more and troubleshooting Catalina issues could take hours or days.

I don’t know about you, but when my Mac isn’t working properly, I don’t get much work done until I fix it. Since I rely upon my Mac for almost everything that might be considered “work,” the last thing I need is to spend hours (or days) troubleshooting avoidable issues.

I’m running Catalina on both of my Macs because it’s my job. But after spending a good part of yesterday trying to get Final Cut Pro working, I wish I could regress to Mojave for a few more weeks.

So, here’s my advice to you: Unless your job requires Catalina (which I can’t imagine), wait a few weeks for Apple (and third-party developers) to find and fix at least some of the most egregious Catalina bugs.

In the immortal words of Dave Hamilton and John F. Braun (of Mac Geek Gab fame): Don’t get caught!