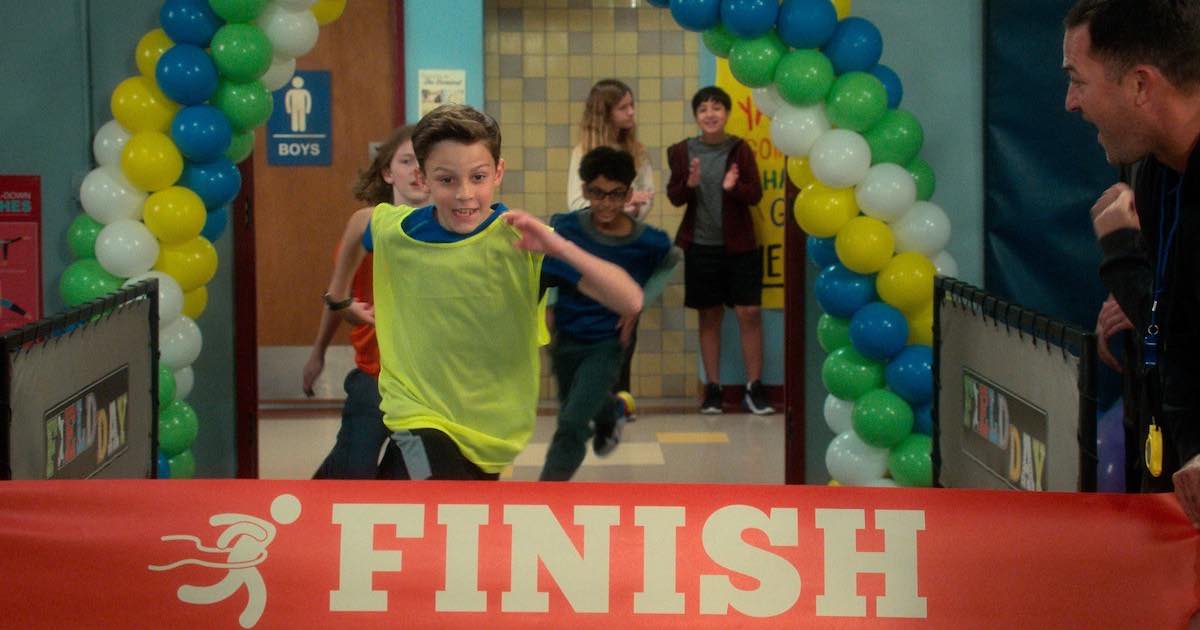 Today we’re going to review Best Foot Forward, which is now streaming on Apple TV+. Public school can often be a challenge for everyone. Children can be mean, classes can be difficult, and sometimes teachers often seem like they’re speaking a different language. However, for Josh, a child with a prosthetic leg, he’s looking to make the most of his middle school experience.

For younger audiences, Best Foot Forward will likely delivery big laughs for those going through the same experiences. But what about adults? In many ways, the show can still deliver plenty of entertainment. The series has a lot of heart, and many of the experiences Josh goes through may lure in those looking for something more lighthearted.

Best Foot Forward is based off the book Just Don’t Fall by real-life Paralympic athlete, author, motivational speaker and comedian Josh Sundquist. The story follows 12-year-old Josh Dubin (Marmino) as he moves from homeschool to public school. With an eagerness to get the full experience of public school, Josh also faces a series of challenges.

As mentioned in previous reviews, comedy is my wheelhouse. A well-timed joke or excellent comedic timing is almost always going to immediately win me over. Of course, I like blue humor as much as anyone, but for me, writing a joke that can make both a child and an adult laugh is truly some of the hardest comedy to write. In this regard, I think Best Foot Forward delivers.

The tone of the show reminds me a lot of contemporary comedic writing combined with a classic live-action Nickelodeon show. The delivery of jokes is quick and with a sharp-witted absurdity that reminds me a bit of 30 Rock. Yet the overall delivery of each episode feels more like Boy Meets World.

Looking at the Cast, a Review

In terms of the characters, many of their challenges will likely resonate with children and adults alike. Josh wanting to have his fellow students not treat him differently while Kyle does his best to be noticed are likely feelings and experiences everyone who has gone to school went through.

In terms of the actors, young Logan Marmino deserves major kudos for delivering such high quality acting in his first major role. It’s practically impossible not to like Marmino as he portrays Josh. His enthusiasm not just for the character but for acting really shines through, and he possesses a charisma that radiates through each episode.

Hopefully this is but the start of a bright career for Marmino, though the rest of the cast also carries their own charms. Fans of Suite Life of Zack and Cody will be delighted to see Brian Stepanek as the hilariously-oblivious Principal Keifer. Those with a keen eye may also recognize the character Matthew, played by actor Roger Dale Floyd, who has made appearances on The Walking Dead and Stranger Things.

Another standout would be Joy Soprano as Maggie, Josh’s Mom. Like some mothers, Maggie is overly protective of her son, often serving as the overly concerned voice of reason when Josh finds himself overly ambitious. As the series progresses, she grows more supportive of Josh’s decisions.

According to an article for The New York Times, Muse Entertainment was intent on finding an actor who shares the Josh’s disability. Additionally, the company also made sure to hire behind-the-camera crew with disabilities. This may possibly be due to GLAAD research from 2021 finding that the majority of characters with disabilities are played by non-disabled actors.

I feel Best Foot Forward does an excellent job taking a look at the challenges one can face in public school while still keeping a positive vibe to the show. Whereas students in a public school can often be a bit meaner than Best Foot Forward typically portrays, it allows the show to focus on experiences that can relate to a larger audience.

The episode “Clubs” is a great example of this. Josh finds himself joining far too many clubs at school, and realizes that he has to choose which activities are actually most important to him. As Josh realizes that he would rather play B&B with his friends than run himself rampant, it can be an important lesson for both young and old that spending time with those you care about is important.

The Final Word for ‘Best Foot Forward’ on Apple TV+

There’s a lot of fun to be had within each episode of Best Foot Forward, and, like any good family-friendly show, issues find presence and resolutions within each episode. Situations present themselves, conflict happens, a resolution is discovered, and lessons are learned. Best Foot Forward doesn’t deviate too far from the family-friendly formula, though the characters and jokes means it doesn’t need to.

Ultimately, Best Foot Forward can deliver for both adults and children. Younger audiences should be able to follow along with the story and find plenty of laughs, whereas there is also enough solid material for adults to enjoy as well. While this may not be a show that older audiences may binge-watch by themselves, those that are willing to take a leap will find themselves in an ambitious world.

For those with children going through middle school themselves, Best Foot Forward serves as a great option for family night. For adults that enjoy family comedy on their own, the series carries enough charm for anyone to find enjoyable.

What do you think about Best Foot Forward? Is there anything you’re watching on Apple TV+? Let us know in the comments.