The new 2018 MacBook Pro has us all talking. But here’s the best review of them all that I’ve seen so far.

The author, Craig Hunter, is an aerospace engineer at NASA Langley Research Center in Hampton, Virginia. Apple sent him a 2018, 15-inch MacBook Pro for evaluation and performance testing. And while there has been a flurry of reviews this week, I think this one is the best of them all.

There are several reasons. Craig is a developer, known for his iOS app Theodolite. I reviewed it a few years ago. “Theodolite App for iOS is Breathtaking.” That means when it comes to compiling and running test code, Craig is very experienced, including familiarity with OpenCL. (A system for running parallel processing code on multiple GPU cores.)

NASA is also heavily involved in supercomputers. And that means Craig is familiar with the supercomputer benchmark called Linpack as well as things like computational fluid dynamics (CFD). While the 2018 MacBook Pro is not a supercomputer, this Linpack benchmark tells other scientists what kind of computing power is available to them, in a common standard.

Finally, being an aerospace engineer, Craig is comfortable with the technology and nomenclature of computers, CAD software, memory types, thermal issues, internal and external GPUs, and so on. You’ll see these topics come up in his splendid review. 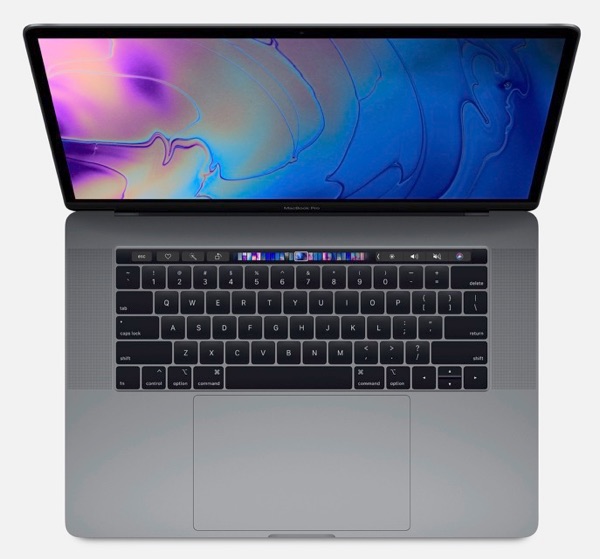 Craig has published reviews like this in the past, so he has history data for comparison.

First up, I’d like to look at single core performance by generating the surface mesh of an aircraft composed of 237,660 triangles. I’ll be comparing the 2018 MacBook Pro to 10-core and 18-core iMac Pros, as well as my old 2016 MacBook Pro. Here, we see the 2018 MacBook Pro coming in 29% faster than the 2016 model and just barely edging out both iMac Pros – truly impressive performance for a laptop. And with 32GB, the MacBook Pro will be capable of generating some fairly large meshes, addressing the chief limitation of my 2016 model for CFD use.

This answers the question about why the engineer needs 32 GB of RAM and also allows sensible comparisons to the iMac Pro. Of course, it’s hard to beat an iMac Pro with 18 cores. But the 2018 MacBook Pro turns in a respectable 250 gigaflops with 6 cores. 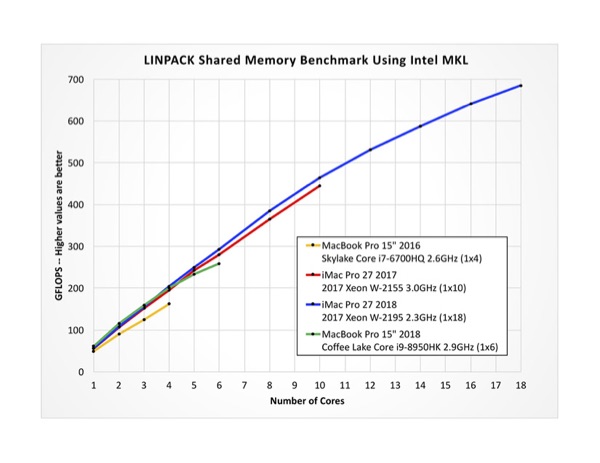 That should be enough to whet your appetite. Whether you’re a scientist, engineer, creative professional or any kind of pro user, you’ll want to pore over this outstanding review by Craig Hunter.

Next Page: The News Debris for the week of July 9th. More on MacBook Pro.

You slipped a quotation mark into the url for the review of the updated MacBook Pro, so clicking the link takes “Not Found”.

It is easy enough to remove that, but some people may not realize it. Just wanted you to know. (You can delete this comment if-n-you fix it)

Thanks Jon. It’s all fixed now.