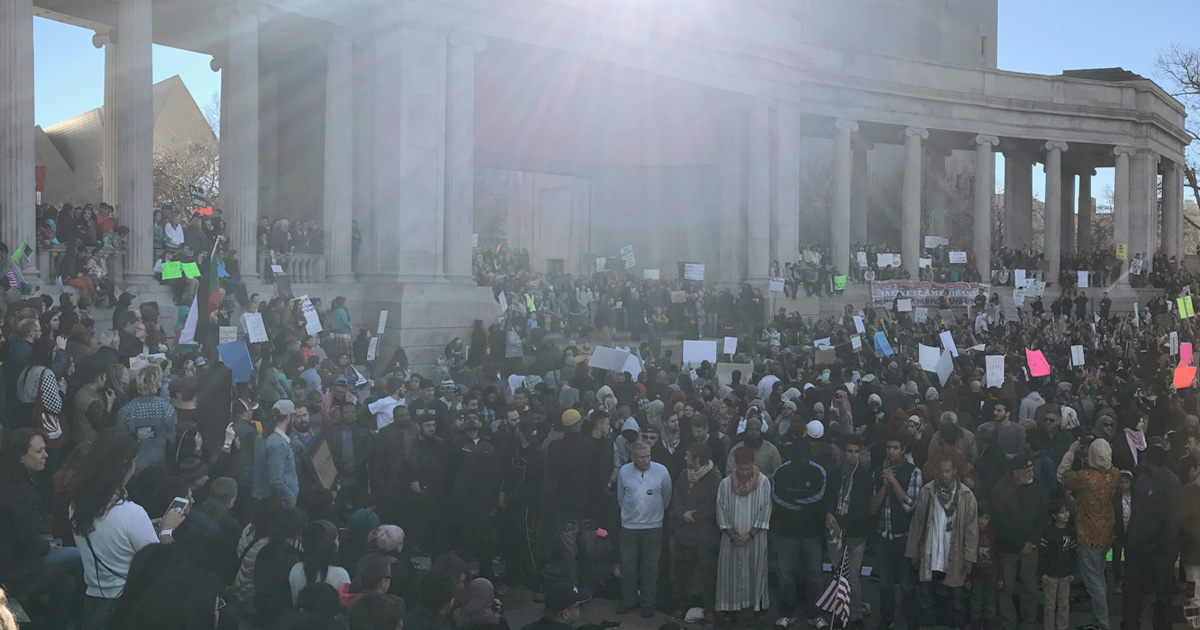 The executive order singles out immigrants and refugees from Iraq, Iran, Sudan, Syria, Libya, Somalia, and Yemen over claims they could engage in terrorist acts. The order has proven to be very controversial and has already landed in front of more than one Federal Judge.

The order sparked demonstrations at several airports when valid green card holders and people who had already been approved for immigration where detained and in some cases were put flights leaving the country. It also led to demonstrations in support of immigrants, and Muslims in particular, in cities all over the United States.

The order is seen as a “Muslim ban” because it favors non-Muslim religions, and Mr. Trump promised what he called a Muslim ban during his presidential campaign. Rudy Giuliani also said Mr. Trump came to him asking how to make a legal Muslim ban.

“[Mr. Trump] called me up,” Mr. Giulanni said in a Fox interview. “He said, ‘Put a commission together. Show me the right way to do it legally.'”

The Fight Against the Immigration Order

Since the country’s birth, America has been the land of opportunity — welcoming newcomers and giving them the chance to build families, careers and businesses in the United States. We are a nation made stronger by immigrants. As entrepreneurs and business leaders, our ability to grow our companies and create jobs depends on the contributions of immigrants from all backgrounds.

The brief goes on to raise concerns about the status of valid visa holders and the negative impact it could have on the country. “Your recent executive order will affect many visa holders who work hard here in the United States and contribute to our country’s success. In a global economy, it is critical that we continue to attract the best and brightest from around the world,” it states.

Along with Apple, companies such as Google, Microsoft, Facebook, Twitter, Netflix, Spotify, Lyft, and Uber are part of the filing. Outside of the technology sector, Chobani, Levi Strauss & Co, and others participated, too.

The fight over Mr. Trump’s executive order continues with both sides pushing for what they see as the right outcome. The opposition to the immigration order, however, is heating up because citizens across the United States have been joined by a powerhouse list of companies with a vested interest in keeping their skilled foreign born worker force.

[Thanks to Bloomberg for the heads up]

Good for Apple and good for the 96 other companies. Some sense at last coming out of the USA after a couple of weeks of what seemed to be a path to destruction. Blanket bans, walls, trade embargoes, xenophobia… never helped anyone in the long run.

This whole ‘safety of the US’ is complete garbage. Trump is being purely racist here. More people die at the hands of Americans each year than from immigrants or refugees. Perhaps Trump should kick all “Americans” out who are not Native Americans and give the country back to them?

Hooray for Apple! Wish I had a large company so I could join in on this.

I applaud Apple and the others .

The safety of The United States of America will and should always come FIRST! Reguradless of company’s product innovation that only helps that company!

God Bless Our President and God Bless our United States of America!