Apple is moving forward with its original content plans for Apple Music with a new artist interview series called Up Next. The monthly interviews start off with Zane Lowe interviewing singer and rapper 6LACK. 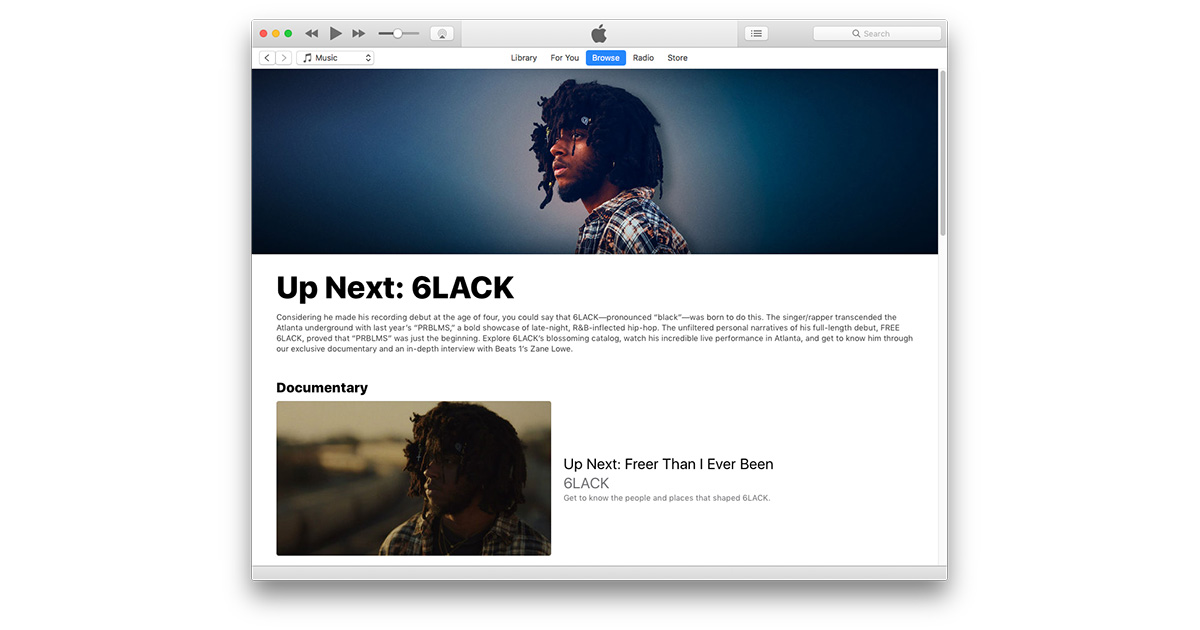 Apple Music’s Up Next series debuts with 6LACK

The series is being presented as interviews with “music’s next generation” in the form of short documentaries and interviews. Apple hyped the series on Twitter saying there will be a new interview every month.

Considering he made his recording debut at the age of four, you could say that 6LACK – pronounced “black” – was born to do this. The singer/rapper transcended the Atlanta underground with last year’s “PRBLMS”, a bold showcase of late-night, R&B-inflected hip-hop. The unfiltered personal narratives of his full-length debut, FREE 6LACK, proved that “PRBLMS” was just the beginning. Explore 6LACK’s blossoming catalog, watch his incredible live performance in Atlanta, and get to know him through our exclusive documentary and in-depth interview with Beats 1’s Zane Lowe.

Apple is actively hunting for original music-related content for Apple Music, and Up Next is just the latest addition to the lineup. Apple also has original shows in the form of Carpool Karaoke, Vital Signs and Planet of the Apps coming, and just landed the exclusive rights to the Clive Davis documentary Clive Davis: The Soundtrack Of Our Lives that opened this year’s Tribeca Film Festival.

Up Next also includes artist performances, titled Up Next Sessions.

In some ways, Up Next feels a lot like Apple’s failed Apple Music Connect feature. The idea was to give artists a way to share songs and behind the scenes information with fans, but it never really took off. Up Next looks like Apple’s attempt to fix that by offering a look into artist’s lives in a more compelling and intimate way.

For artists on the rise Up Next could be a powerful tool to help push their careers to a new level. For Apple, it’s a way to make Apple Music more enticing to current and new subscribers.