The European Union says Apple owes €13 billion (about US$14.5 billion) in back taxes because Ireland gave the iPhone and Mac maker illegal and unfair tax advantages. Apple and Ireland have both condemned the ruling maintaining they acted within the country’s laws, and are planning to appeal the ruling. 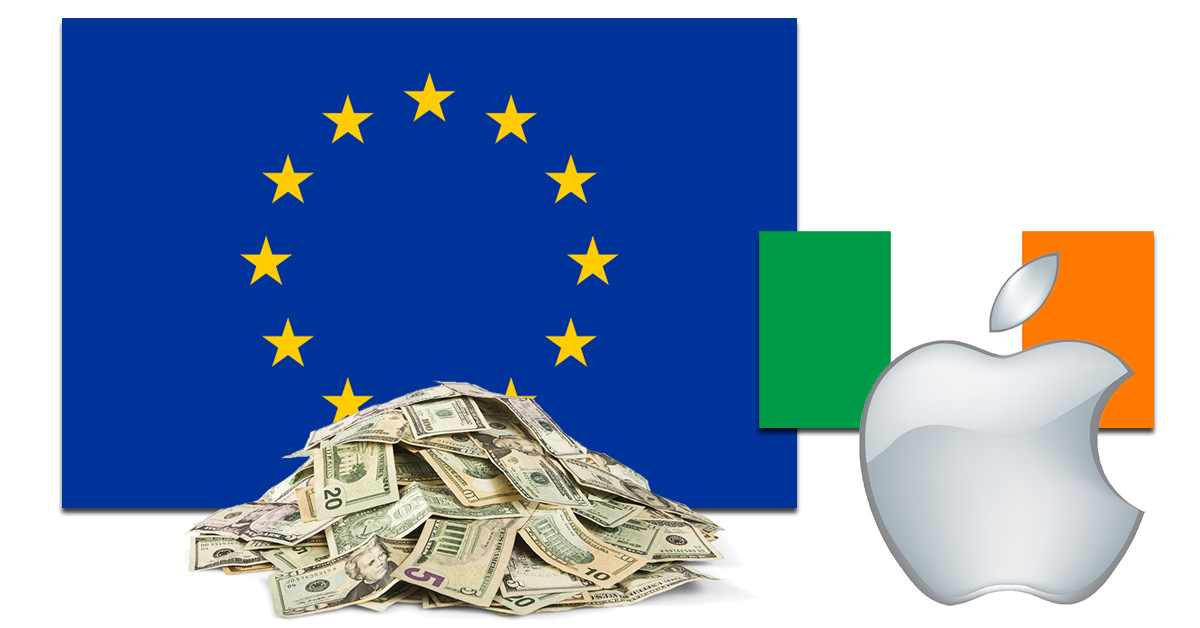 The EU’s ruling follows an investigation into the taxes Apple paid in Ireland between 2003 and 2013. The conclusion of the investigation, which started in 2014, was that Ireland broke EU laws to give Apple an unfair tax advantage.

Margrethe Vestager, who is in charge of the European Commission’s competition policy, said,

The Commission’s investigation concluded that Ireland granted illegal tax benefits to Apple, which enabled it to pay substantially less tax than other businesses over many years. In fact, this selective treatment allowed Apple to pay an effective corporate tax rate of 1 per cent on its European profits in 2003 down to 0.005 per cent in 2014.

Apple’s declining tax payment percentage, according to the Commission’s finding, comes from paying the same amount each year while company profits climbed.

According to the investigation’s findings, Apple funnels its profits from sales in Europe into Ireland-based Apple Sales International. Some money is paid to Apple in the United States to fund research and developments while most is diverted to an entity known as the “head office” where it isn’t taxable. The “head office” is apparently a company on paper without ties to any specific country, and as such aren’t taxed, according to the EU.

“The Commission concluded that the tax rulings issued by Ireland endorsed an artificial allocation of Apple Sales International and Apple Operations Europe’s sales profits to their ‘head offices,’ where they were not taxed,” the EU said in a statement. “As a result, the tax rulings enabled Apple to pay substantially less tax than other companies, which is illegal under EU state aid rules.”

Apple’s response to the EU ruling was clear and damning. CEO Tim Cook penned an open letter criticizing the investigation and its findings. He said,

The European Commission has launched an effort to rewrite Apple’s history in Europe, ignore Ireland’s tax laws and upend the international tax system in the process. The opinion issued on August 30th alleges that Ireland gave Apple a special deal on our taxes. This claim has no basis in fact or in law. We never asked for, nor did we receive, any special deals. We now find ourselves in the unusual position of being ordered to retroactively pay additional taxes to a government that says we don’t owe them any more than we’ve already paid.

He went on to call the ruling unprecedented with wide-reaching implications, and a move to retroactively change Ireland’s tax laws.

“At its root, the Commission’s case is not about how much Apple pays in taxes,” Mr. Cook said. “It is about which government collects the money.”

Mr. Cook said Apple will appeal the ruling, which makes sense not only from a fiscal standpoint, but also because no laws were broken. Apple acted within the boundaries of Ireland’s tax laws and under the advice of the local government.

Next up: Ireland’s reaction

This has just been posted by the BBC. Irish government to appeal.

Ireland may not be in the he EU in the future. People are fed up of the EU commission. Ukn as just an example of people being fed up with EU.

Unless your a EU biased economist who made daft predictions on UK bredaft you’ll understand.

“Section 891 of the U.S. tax code, passed in 1934 but never used, allows the president to double tax rates for citizens and corporations of any country the administration considered was discriminating against U.S. companies.”

@”IRA”: Northern Ireland is not in Ireland.

@”EU get lost”: the reason for setting up Apple Sales in Ireland is the access to the EU common market. If Ireland would leave the EU, Apple Sales would move to another member state with low corporate taxes.

Margrethe Vestager needs to get a proper job. As a Brit who voted for brexit I would advise Apple to tell the EU to get lost. Us Brits voted out (despite Obama and Clinton advice) of the EU for this very reason as the EU thinks it has the right to dictate to subject nation states how to manage their affairs.. Now the US can feel our pain. The EU project is dead in the water. Get lost EU

This is a difficult position to be in; I can conceivably see how politically things like this made sense to attract commercial activity in the 1980s and 1990s when Ireland was in a state of unrest. In the 1990s (and prior) The IRA (Provisional Ireland Republican Army) held control of the Republic of Ireland and was employing guerilla warfare tactics.

Today, however, things are dramatically different. Other computer and telecommunications companies based throughout Europe are held to a reasonable standard; The IRA entered into a cease-fire in the late 1990s.

The EC had a problem with offering special tax rates to a single company. If Ireland’s tax rate was 0.005% for all corporations, Ireland would not be in violation of EU law.

Ireland could just withdraw from the EU, add is am independent country from the UK, but then there would be no reason for Apple use them as an EU tax haven any more…

Ireland’s 12.5% corporate tax rate has been a strong catalyst for the country’s economy, drawing in thousands of jobs. Its tax laws are a key part in drawing major corporations into the country, and that’s an advantage the government doesn’t want to give up.”
The 12,5% tax rate is not questioned.