Amazon’s Alexa Voice Service has become a runaway hit with consumers of all levels of technical expertise, showing just how well far-field voice recognition can work in the home. Alexa can already be used to play music on its own speakers (or those connected via Bluetooth or cables) but right now Sonos control via Alexa is something that’s left up to those willing to apply a very geeky hack. Starting in private beta this year and public beta next, Amazon’s Alexa-enabled products will be able to directly control your Sonos speakers. Tell Alexa to play some Mahavishnu Orchestra on your Sonos speakers in the kitchen, and suddenly “Noonward Race” is inspiring you to cook something a little more adventurous!

Working closely together, Sonos and Amazon make it so that you can continue to give Alexa commands even while music is playing, making for seamless control of that aspect of your home. 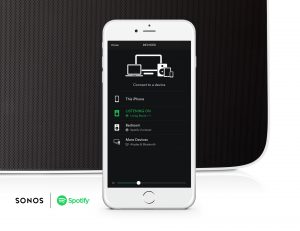 Coming in Beta in October, iOS users will be able to control Sonos from within the Spotify app.

Continuing the concept of opening up control, Sonos demonstrated an upcoming version of Spotify’s iOS app that had the ability to choose to play directly on your Sonos speakers. Pandora will see a similar treatment, too. Spotify’s integration goes even deeper, allowing you to start playing something on your iPhone, perhaps in your car, and then simply hand that off to Sonos when you get into the house.

Currently the only way to control Sonos is using their proprietary app. While free and easy-to-use, it has never allowed for the flexibility that this new open system will offer. For Sonos and Spotify customers, this is a very big deal and will be available in a public beta starting in October.

It’s important to note that these new control options do not fundamentally change the way Sonos works. Currently when you use the Sonos app to play music from Spotify in the kitchen, the app only acts as a remote control and all the streaming happens directly in the speaker units themselves.

That concept continues through all of these new integrations, too. Regardless of whether you start playing your Sonos from Alexa or the Spotify app, the speakers are still streaming directly from the Internet. This means you could launch Spotify on your iPhone, tell it to start playing “Sketches of Spain” on your living room Sonos speakers, leave your house with your iPhone in your pocket and the people (or pets!) left at home would hear the entire album through to “Solea.”

It also means that if you were to start playback from the Sonos app you could then use Alexa to skip songs or change the volume. Other members of the house could add tracks to the existing queue with the Sonos app or any other options. Sonos calls themselves the “sound platform for the connected home” and that means Sonos is still the foundation to which all of these new controls connect.

Despite passing mentions of Apple Music and a short recap of the study the two companies did together earlier this year about the effects of music in the home, Apple Music was notably absent from the integration-related announcements. When pressed about the issue, Brad Duea, Sonos’s Managing Director/General Manager, Americas-Pacific (and former Napster President) predictably declined to comment on any future app integrations or Siri functionality. Mr. Duea did reiterate that Sonos and Apple continue to enjoy a very good working relationship.

It’s important to remember that Siri’s public implementation does not include all the far-field voice recognition mojo that Amazon has with the Echo and Alexa platform. Amazon has worked very hard to solve the problem of not only responding to your voice from across the room, but specifically doing so when music is playing. There’s little doubt that Siri can and will get there, and my guess is that when Apple is ready to roll out that type of integration for third parties, Sonos would be a likely candidate to be on that list. Before that, it seems likely that some of iOS 10’s recently-announced third-party Siri functionality would come to the Sonos iOS app, but Sonos has yet to say anything along those lines.

Integrating Sonos into Apple Music the way Spotify has done might be a different matter, though. While Siri is officially opened up to third-parties with iOS 10, Apple Music’s external options only include AirPlay and Bluetooth devices. Sonos doesn’t currently work with AirPlay directly, and while the company has previously indicated some internal experimentation along those lines, they haven’t ever given any reason for us to think that this is something they plan to add. Without AirPlay, though, I just don’t see Sonos being integrated into Apple’s iOS Music app.

There is a new Sonos iOS app update coming September 7th that has a general focus on reducing the “time-to-music” in various places. As is typical for Sonos, the app update is compatible with all existing Sonos products, adding the new functionality to even the oldest of Sonos products.

This new direction of opening up control is a fantastic thing to see and all Sonos users should be quite happy about the new options it offers.

Siri needs some big improvements, IMO. Hopefully, an Apple hub with new and improved (AI) Siri will allow all this functionality, and more, without requiring powered speakers.