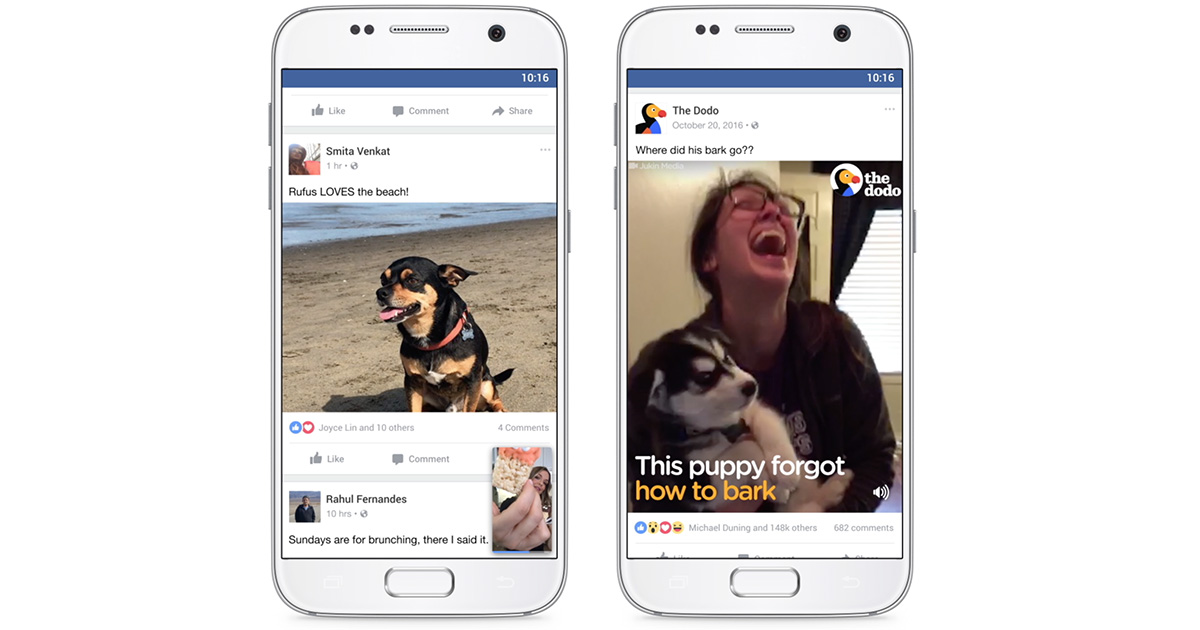 Facebook wants to make video more engaging, so it’s going to make their audio auto-play in their mobile apps. Currently, audio is off by default and from Facebook’s perspective, that’s boring, limiting, and just plain blah.

Videos will stay silent until they scroll onto your screen, which is something of a consolation since a listening to the audio from several videos playing at the same time doesn’t seem engaging or enticing.

Facebook has already started rolling out the feature. If you aren’t seeing (or hearing) it yet, don’t worry because it’ll be there soon enough. Facebook Product Manager Dana Sittler and Engineering Manager Alex Li said,

As people watch more video on phones, they’ve come to expect sound when the volume on their device is turned on. After testing sound on in News Feed and hearing positive feedback, we’re slowly bringing it to more people. With this update, sound fades in and out as you scroll through videos in News Feed, bringing those videos to life.

If your iPhone or other smartphone is set to silent mode the videos in your Facebook feed will be silent, too.

Facebook’s change means the videos your friends post will play audio automatically, and so will video ads, too. In other words, what has been a generally private experience is about to become far more public.

Ads and some other video content on Facebook evolved over time to favor sound-free viewing because the assumption was users wouldn’t un-mute the audio. That’s led to some clever use of on-screen text and subtitles—both of which are great for the hearing impaired.

Hopefully that won’t change with Facebook’s new settings default. Since the changes apply only to Facebook’s mobile apps, and not the web browser interface, videos favoring silent viewing will hopefully stick around.

Regardless, we’ll all be hearing a lot more Facebook audio in public than we have been.

It’s questionable if auto-playing audio is a perk for Facebook videos, but there are some other new features that are. Vertical videos, for example, take advantage of your phone’s screen space instead of shrinking into a little rectangle.

You can scrub through videos, and pin videos in a picture-in-picture style window so you can watch while scrolling through the rest of your timeline. Android app users can watch their pinned videos even after they leave the Facebook app.

Facebook is bringing a video viewing app to Apple TV, Amazon Fire TV, and Samsung’s smart TVs. The idea is that we often want to see the videos in our news feed on a bigger screen, and this makes it easier.

Always on audio for videos is limited to the Facebook mobile app, so deleting that from your smartphone means you won’t have to deal with it. If you really like using Facebook’s mobile app, however, you can disable the audio-on default in its settings.

Considering how many people never bother to change default settings on websites and in apps, it’s a safe bet we’re all about to hear a lot more Facebook audio than we want.

Auto-playing video is something I almost always despise, whether it’s in an app or on a web page. (It still galls me that there’s no way to disable it in Safari.) Adding non-muted audio makes it drastically worse. >:-(

I wish facebook (and other advertising companies) would simply be honest and say “we’re always trying to find new ways to exploit internet users, please our advertising customers, and make more money. This is one of those changes.”

I wouldn’t touch FaceBook with a bargepole, auto-playing audio or not.

Oh they got the memo, from the advertisers. It they who are Facebook’s customers and its sole reason for existence. Saying that the users want autoplay is an alternative fact.

I guess Facebook missed the memo — I don’t like auto playing audio. In a tree. In a car. On the sea. On a star. Anywhere. Anytime. Anyhow.

Reason #296863 why I ran screaming from Facebook years ago.

Unfortunately I have relatives who haven’t, which means (more) family tech support with them wondering why all their data is getting used up, and why they can’t go a day on a charge….

By being on Facebook I have reconnected with some long losts, but like everything there are downsides. Also I understand the need for advertising on a “free” website or service, but they need to be respectful of us; autoplay is incredibly annoying in a quiet environment, not mention the soundtrack on too many videos is cacophonic. And websites wonder why we use adblockers.

Pretty much, Lee. If Facebook kissed my !#$#@ a thousand times, it probably wouldn’t be enough. 😉

It isn’t what we what, but what the advertisers want.

Reason #296863 why I don’t have FB’s mobile app.
I also remember seeing a post somewhere that Messaging via the FB web site was going away. You had to have the FB Messenger app. Does anyone know if this is true. If so then no more Messaging for me.

WTF is FB doing? Are they trying to become the most hated company in the world?