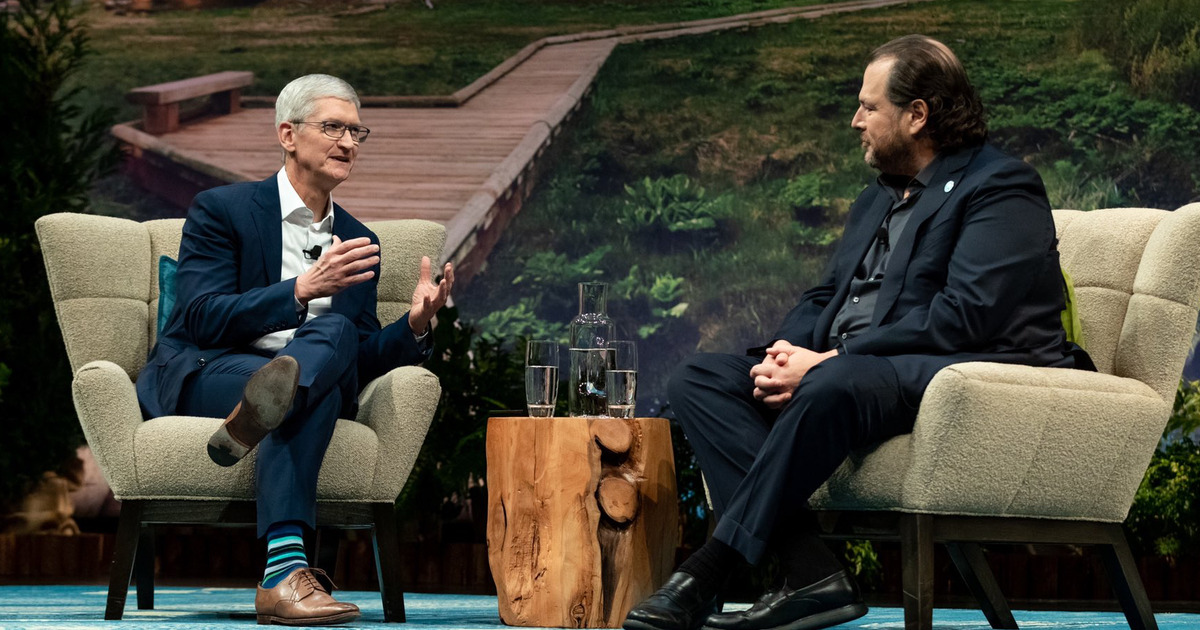 Mr. Cook commented that “people told us there was no way we could ever run Apple on 100% renewable energy,” but the company has now achieved this. Consequently, it now aims to improve recycling and not mine minerals from the Earth to make products. Mr. Cook said Apple wanted to “leave the world better than we found it.” Mr. Cook also highlighted privacy as another core Apple value during the half-an-hour long discussion.

Steve Jobs used the Yerba Buena Center for Arts, the venue that hosted the chat between the two CEOs, to launch a number of Apple products. These included the original iPad in 2010. The significance of the venue was not lost on Mr. Cook. He said  he could “feel” his predecessor’s “presence whenever I come here.”

Salesforce Boss Only Uses an iPhone

For his part, Mr. Benioff said he doesn’t use a computer, only using his iPhone. “I don’t even own a computer anymore, I don’t need one. The phone has really become an extension of my office wherever I am,” the Salesforce CEO said.

Apple and Salesforce announced a strategic partnership at the Dreamforce conference last year. Mr. Cook clearly enjoyed his visit this time around. He tweeted afterward that it was “incredible to see how Salesforce and their passionate developer community are using our products and software.”

Itâ€™s incredible to see how Salesforce and their passionate developer community are using our products and software to change the way businesses work. From productivity to privacy, great technology can change everything. #DF19 pic.twitter.com/hCl7Ud9nEd