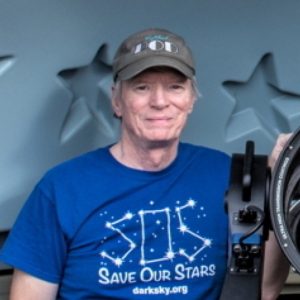 Mike Weasner is a noted amateur astronomer, known for his book on the Meade ETX telescopes, early iPhone astrophotography and work with the International Dark-Sky Association (IDA) in Arizona. Very early in life, Mike fell in love with astronomy, and that led to a B.S. in astrophysics. Via ROTC, Mike later joined the United States Air Force, where he served as a fighter pilot (A-7D), instructor (T-38), and a manager in the Air Force’s Space Shuttle Program Office. After his USAF duty, Mike spent 23 years as a program manager with TRW/Northrop Grumman. We chatted about his Air Force days and some interesting flight experiences. In the second segment, we talked about the construction of his observatory, evolution of his telescopes, astrophotography of asteroids, supernovae patrol and his work with the IDA.