Over the summer Apple blocked certain apps like AdGuard and Freedom because they can interfere with how other apps work.

Hackers injected 15 lines of card skimming code on the online retailer’s payments page which remained for more than a month between August 14 and September 18, Yonathan Klijnsma, a threat researcher at RiskIQ, told TechCrunch. The code siphoned off credit card data from unsuspecting customers to a server controlled by the hackers with a similar domain name — likely to avoid detection. The server even used an HTTPS certificate to blend in.

For the past couple of years I’ve used a service called Privacy.com. It connects to my bank account and I can create near-unlimited virtual cards to use with various places. And no this isn’t an ad, I just think it’s a great service. It’s basically a password manager for your money.

Turn off notifications. Just do it. They create unnecessary stress and some apps use notifications to whine that you’re not using it 24/7. Especially Facebook.

As our attention is increasingly fragmented and split among dozens of apps, the apps have compensated by getting more demanding of your time. Notifications are no longer used to notify you of anything—they’re used by apps to scream over each other in hopes that you’ll click them.

Our phones don’t control us. In fact it’s the other way around.

Apple updated its iTunes Store terms and privacy disclosures. Included is how the company computes a device trust score to prevent fraud.

To help identify and prevent fraud, information about how you use your device, including the approximate number of phone calls or emails you send and receive, will be used to compute a device trust score when you attempt a purchase. The submissions are designed so Apple cannot learn the real values on your device. The scores are stored for a fixed time on our servers.

They aren’t full records, rather “abstracted.” It’s not like Apple is going to abuse this information, but at first glance it does seem a bit unusual. Especially for devices like Apple TVs that don’t have email or phone capabilities.

Born to a mother who was a member of the Black Panther Party and raised in Brooklyn in an environment of political ferment and police scrutiny, Malkia was fighting against the surveillance of activists and people of color before anyone knew my name.

Us white people might not be so used to surveillance, but Mr. Snowden reminds us how African Americans and Muslim Americans have long been targeted by the government. 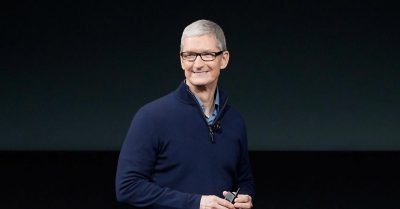 Good Morning America has a new Tim Cook Interview. Robin Roberts interviews him and talks about the trade war with China, the price of the new iPhones, the iPhone’s camera, and Memojis.

The iPhone is assembled in China, but the parts come from everywhere. Including the United States, you know, the glass comes from Kentucky, there are chips that come from the U.S., and of course the research and development is all done in the United States.

So, I don’t want to speak for them, but I think they looked at this and said that it’s not really great for the United States to put a tariff on those type of products.

This is the first time Apple has published a security guide so quickly after an iOS launch.