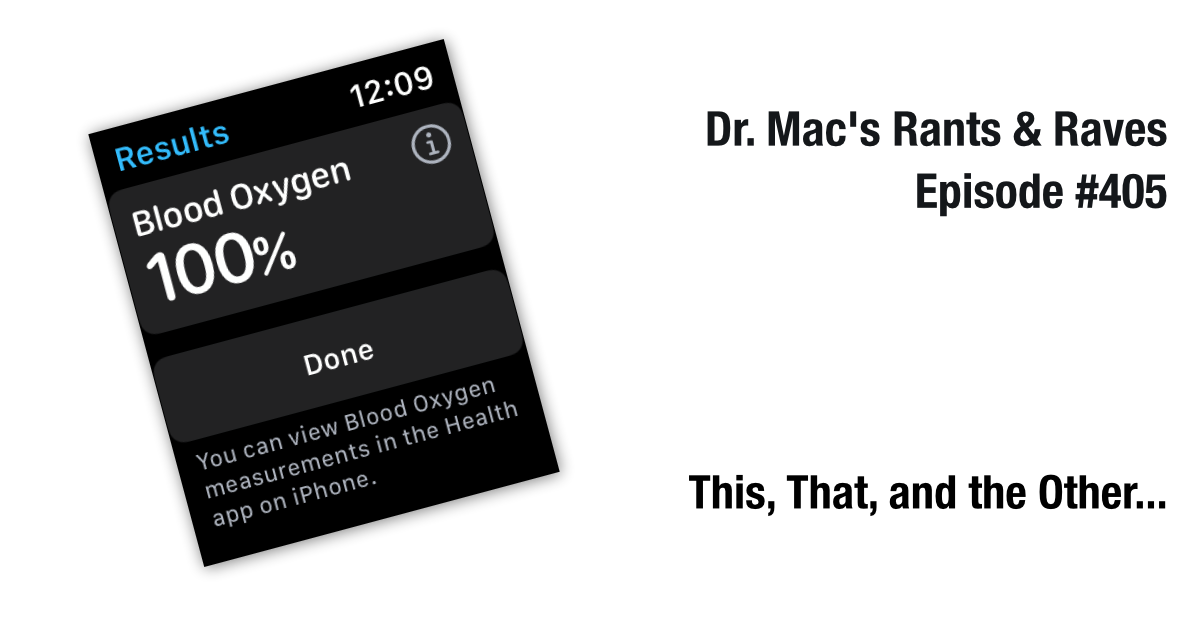 This week I’ve got hints, tips, recommendations, and bits of advice on various topics.

After searching the web and Apple’s Support database to no avail, I discovered a fix in the crowd-sourced Apple Support Communities web pages. The issue resulted because I had once installed a beta release of iOS 14 on my iPhone. Apple Support did offer an article on removing the beta version (https://support.apple.com/en-us/HT203282), which entailed putting the iPhone into recovery mode, erasing its contents, reinstalling iOS 14 (non-beta), and restoring my content from a backup. While it took several hours, it fixed the issue, and my watch now checks oxygen saturation levels as expected.

I recently noticed that my iPhone’s battery was dying much earlier in the day than usual, often dying long before dinnertime.

After much hair-pulling and web searching, I found a solution in an Apple Support database article entitled, “If you’re missing Workout GPS routes or Health data after updating to iOS 14 and watchOS 7 (https://support.apple.com/en-us/HT211865). The title threw me off, but the solution was buried in a list of possible symptoms: “Increased battery drain on your iPhone or Apple Watch.”

My Apple Watch is brand new, so I really don’t have a good idea of its expected battery life. But I know my iPhone battery pretty well, and it was draining faster than normal.

So, I followed the article’s instructions, and after unpairing and re-pairing my watch and iPhone, the issue was resolved.

This just in: If you’re having battery issues with your Apple Watch, update to WatchOS 7.0.2 (released earlier this week), which promises to address “an issue that could cause the battery to drain more quickly” (along with several other fixes and improvements).

One more thing: I’m working on a full review of Apple Watch 6—watch this space!

Back in April, I told you that musical instrument maker Fender was offering 3 months of free guitar, bass, or ukulele lessons through its Fender Play website. While that offer expired last July, Fender recently announced it is reviving the promotion from now until the end of the year due to popular demand.

According to Fender, “When quarantine began, we invited the world to make some noise with free access to Fender Play. Six months in, the world is louder than ever — and music still has the power to connect us all. So, until 2020 is over, our invitation is back, 3 months of free online guitar, bass, and ukulele lessons. No cost. No catch. Just music. Let’s play on through to the other side.”

I’ve learned some new songs and find the lessons both enjoyable and easy to follow.