Everyone has to take notes at some time in their life. Long ago, when I was a student (and later as a cub reporter), I took notes by scribbling in a spiral-bound notebook. My handwriting is awful; I could only hope to decipher my scribbles. 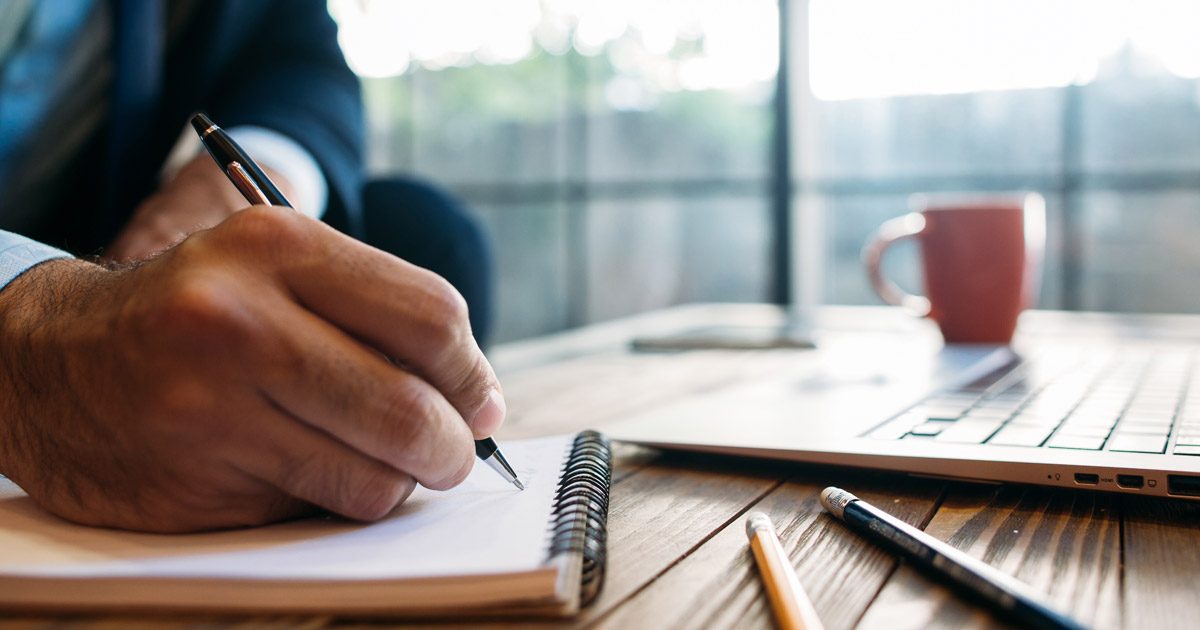 In the ensuing years, I have tried every new technology for note-taking, from pocket tape recorders to personal digital assistants including (but not limited to) the Palm Pilot and Apple Newton. But, nothing worked as well or as reliably as the old-school method of scribbling on a notepad.

So, that’s what I did until about 20 years ago, when laptop computers became viable for taking notes.

At first I typed my notes into a word processor document. This worked well and was markedly better than handwriting, since I could always read my typed notes. But it meant hauling my laptop with me if I needed to take notes, and required spare batteries or electrical outlets for extended sessions.

Then Microsoft Word added “Notebook Layout View,” which improved on the note-taking metaphor by allowing me to record audio and type notes into the same document. The audio was “synchronized” with the words I typed, so, if the speaker said, “Internet,” I’d type “Internet.” Later, I could quickly jump to that portion of the audio recording by clicking the speaker icon near the word “Internet.”

These hybrid “Notebook Layout” documents, with synchronized text and audio, were perfect for note taking. And that is why, for more than a decade, I’ve relied on Notebook Layout documents for note-taking. 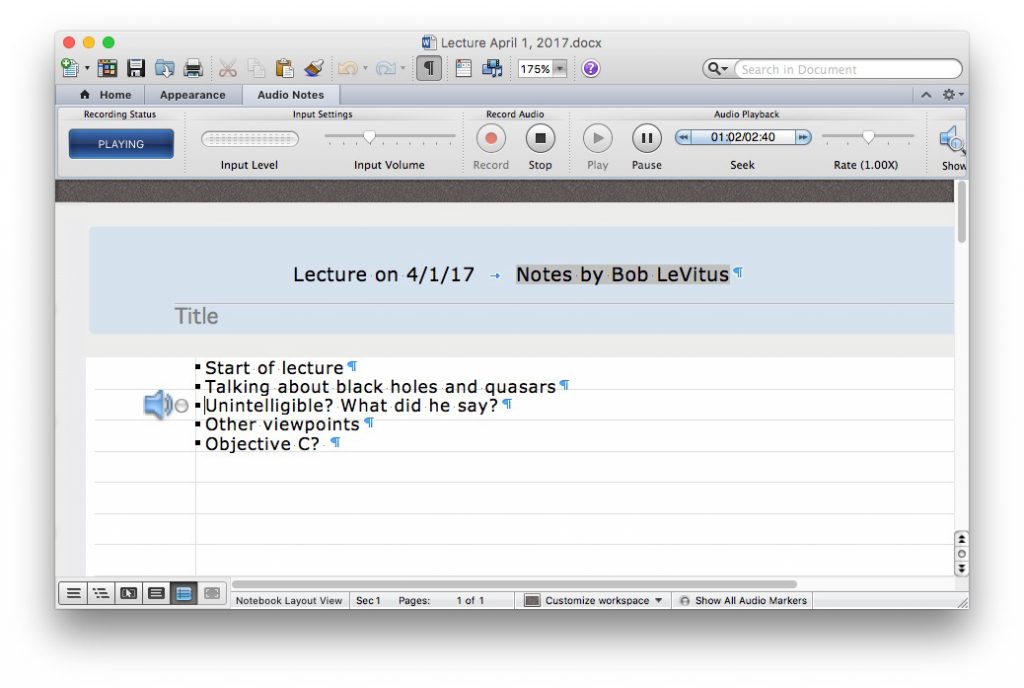 Now for the bad news: While Notebook Layout is still available in my aging copy of Word 2011, it’s nowhere to be found in the current version (Office 365 v 15.32). And while Office 2011 still works OK under macOS 10.12 Sierra, there’s no guarantee it will continue to work with future revisions of macOS.

For what it’s worth, in the current version of Office 365 you’ll find some of the old Notebook Layout functionality in the Microsoft OneNote app. But the implementation seems clumsy compared to Notebook Layout in Word, so, last year I set out to find a better and more modern note taking solution. 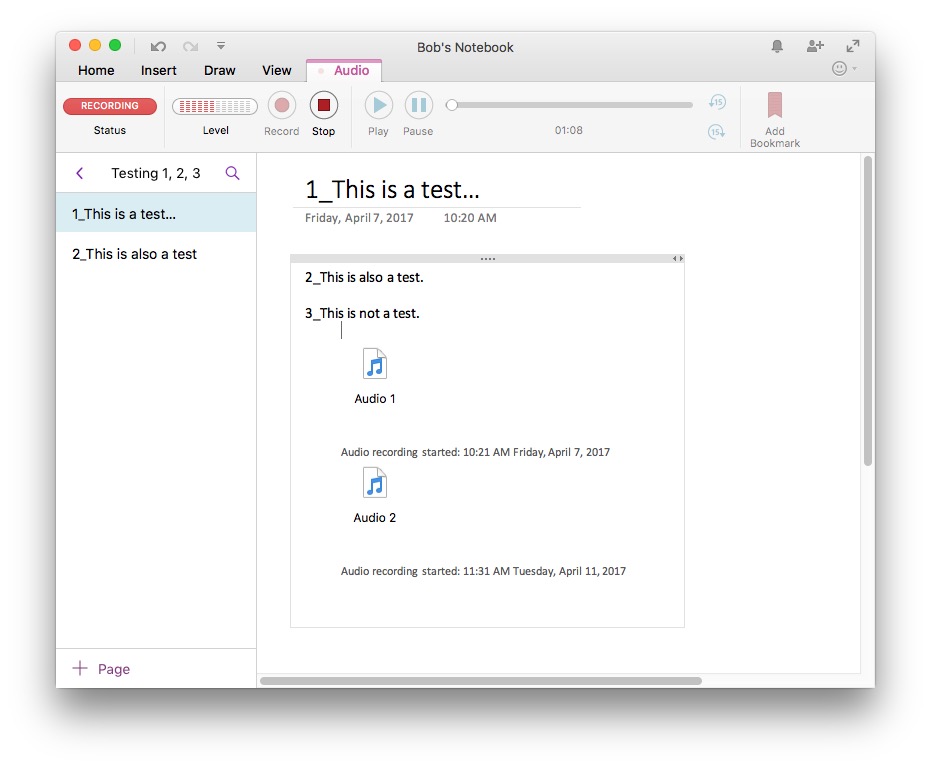 OneNote lets you record audio and type notes, but its interface and implementation are clumsy.

I found it in a $9.99 iPad app called Notability from Ginger Labs. I love it ’cause it does everything Word 2011’s Notebook Layout view could do and more. 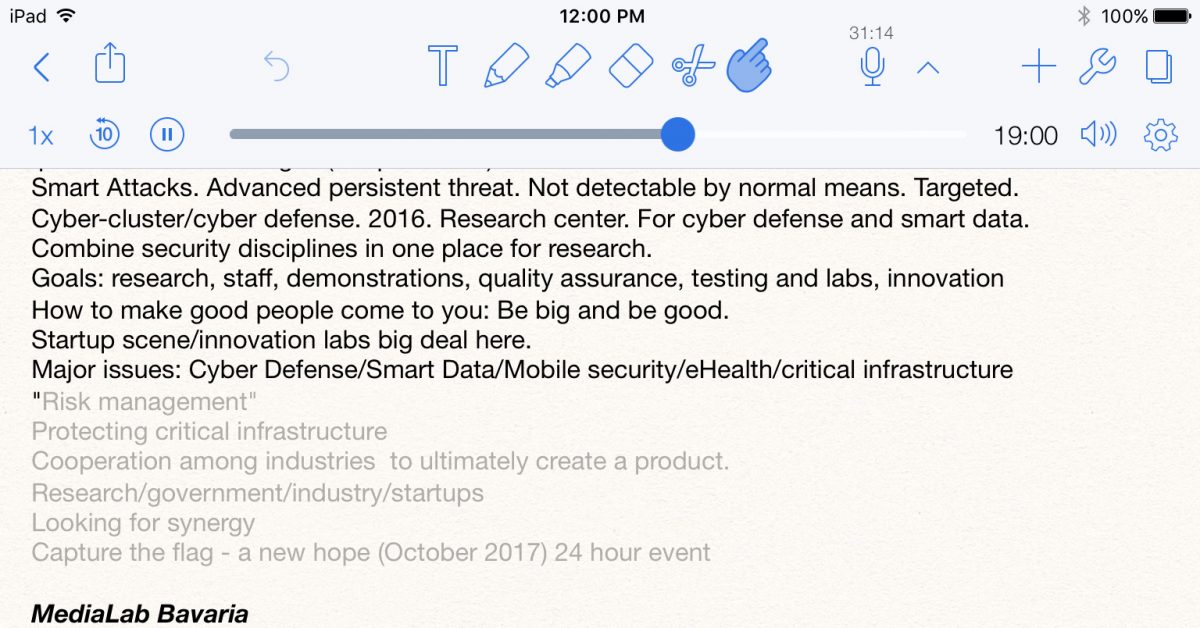 Notability is the perfect combination of typed (or hand-drawn) notes and recorded audio.

It includes iCloud syncing and support for annotation, sketching, and adding photos or videos, making it nearly-perfect for my note taking needs.

I heartily agree about Notability. I used Penultimate when iPad first came out but reverted back to sketchnoting on dotgrid pads but Notability saves time searching through pads for related notes on projects. Mac sync works seamlessly and the ability to share notes before leaving a meeting is very popular with colleagues.

OK, it looks like GoodNotes lacks the synchronized audio I adore… making GoodNotes a non-starter, at least for me.

I’m satisfied with Notability, but will look into GoodNotes. Thanks, fzelders.

I do prefer GoodNotes: http://appshopper.com/productivity/goodnotes-4-notes-pdf

When the iPad Pro 9.7″ and Apple Pencil arrived last year I went looking for a note taking app to replace old style pen & paper. After trialling a few apps I settled on Notability and a year later it is now an indispensable tool in my professional (consultancy) life. Synchronisation to the app on my MacBook via iCloud & automatic saving of “backup” PDFs to Dropbox means that all my client notes are available for referring to whenever and wherever I need (previously I used to manually scan paper notes into PDF – and I was able to import… Read more »