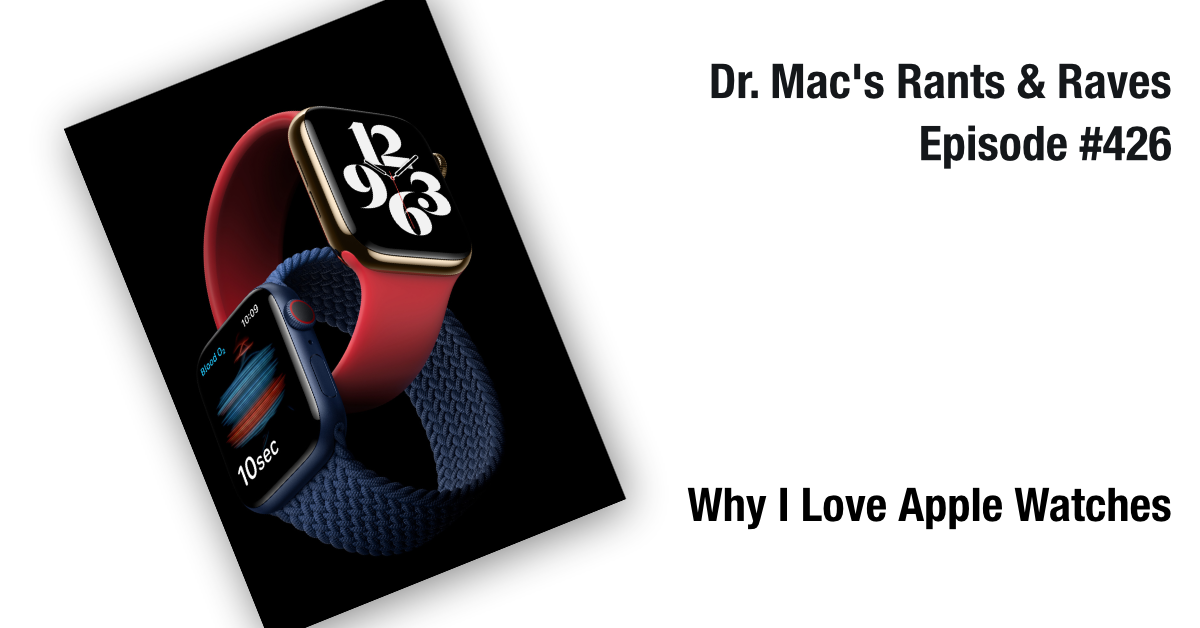 Before Apple introduced the Apple Watch (in 2015), I was an enthusiastic collector of low-to-moderately-priced wristwatches. I have dozens and loved them all—skeleton, tank, old, new, quartz, digital, hybrid, and classic. And I took great pride in selecting the appropriate timepiece for any occasion.

I don’t wear any of them anymore. I fell in love with my Apple Watch the first day, and my passion has grown with each new release.

I have been testing Apple’s latest and greatest (Series 6 with watchOS 7) for a couple of months, and it’s better than ever in several ways that matter to me.

For example, my first Apple Watch often ran out of power before dinnertime; the Series 6 usually runs all day and night (and frequently part of the next day) before recharging. And recharging the Series 6 is faster than ever, requiring less than 1.5 hours for a full charge.

I also like the Always-On Retina display, which Apple says is up to 2.5 times brighter than Series 5. I can’t confirm the amount, but it’s definitely brighter and easier to see outdoors.

Interestingly, I found little use for one of Series 6’s most ballyhooed features, Blood Oxygen Sensor and App, which measures your blood oxygen saturation (SpO2) level. For one thing, it requires you to be very still, so I got a lot of “Unsuccessful Measurements.” And most of my successful measurements were above 97%, which I’m told is good (and expected). It’s been weeks since I invoked a blood oxygen test manually, and while I’ve enabled automatic background measurements, the results (reported in the Health app) are unenlightening. 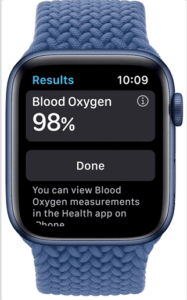 Bottom line: It works as expected, but it’s not a feature I’d pay extra to have on my Apple Watch.

Moving right along, I also like at least one new feature available on all Apple Watches running watchOS 7—automatic handwashing notification and detection. It reminds me to wash my hands whenever I return home from elsewhere and then scolds me if I don’t wash them for a full 20 seconds. I expected to find this feature annoying, but I was wrong. I’ve been washing my hands more often and for longer than ever before, which (at least for me) is a very good thing.

My old watches were lovely, but I haven’t worn one since Apple Watch came into my life six years ago. I don’t often call a tech product “life-changing,” but Apple Watch has changed my life for the better. I don’t think I’ll ever wear anything else on my wrist.

Finally, I think any Apple Watch is better than no Apple Watch. If you’re on a tight budget, consider Apple Watch SE or Apple Watch Series 3, which offer many Series 6 features, but with prices starting at just $199.

Hmm… the life saver literally for me is the ECG app, the cardiac consultant in my nearest city reckons its almost as good as a full ECG. My local doctor changed my medication on the strength of being able to share PDF’s of the traces without setting foot in the surgery, useful in a pandemic. I can figure out within five minutes if I’m suffering from an AF attack, without calling a paramedic out in the middle of the night. And it tells me to stand and WFH all the time, reminders to stand are useful. The VO2 max values… Read more »

I used to wear a watch, moderately priced, my last one was a Swatch Chronograph. Then in the mid ’00s I decided that there was a clock everywhere I looked and stopped wearing one. I was keeping an eye on (notice I didn’t say ‘watching’) the Apple Watch from when it first appeared. The early generations were just too limited, and tbh were mostly a fashion item. Each generation got better though, more capable, and tempting. Finally, last November I finally got an Apple Watches, 44mm Series 6, I wasn’t going to take the timid route. You know what? I… Read more »

I forgot to mention phone calls. I didn’t realize that you can take phone calls on the AW too.

The Apple Watch would be perfect if it had no dependency of an iPhone. Is that technically possible?

Do you mean that the iPhone is never needed? Not even for configuration or whatever? Ever? I mean, can you fully use such Apple Watch without having an iPhone?

So, it seems that the Apple Watch has dependency of an iPhone!

If you have a cellular watch, you can leave your iPhone behind most of the time. But since the Watch app lives on your iPhone, you need an iPhone to configure some functions and to update watchOS.

Thanks. That is what I meant; I am looking forward to an Apple Watch that can be fully configured and used without requiring an iPhone or other gadget. A truly standalone Apple Watch, without any dependency at all. So, the question remains: is that technically possible?

Not at the moment. It could happen someday, but I wouldn’t count on it.