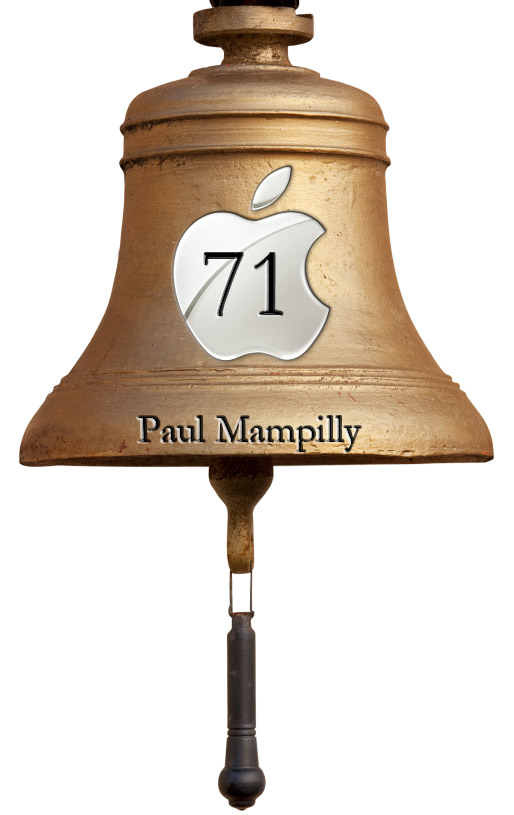 Hello friends, it’s been a while. My last entry into the Apple Death Knell Counter was way back in 2015. I seriously had to go looking for the things I need to add one of these things. But with that, I bring you the prognosticatory visions of one Paul Mampilly, writing for Banyan Hill Publishing, who says simple, “Apple Is Doomed,” or Apple Death Knell #71.

“Truthfully, I’ve been wrong on Apple Inc. stock for a year now,” he wrote, but he’s not letting that deter him from being wrong some more. Because, after all, Apple is doomed.

His reasoning is simple and full of truthiness: Google Chromebooks are popular in schools, where Apple has lost a lot of share. This will keep a new generation of kids from becoming fans of Apple products, thus Apple is doomed.

OK, I’ll readily admit that I’m annoyed at how Apple has ceded the education market to cheap crapbooks. And, Mr. Mampilly makes some good points about how education helped Apple in the past by raising generations of kids on Appley goodness.

It’s similar to how creative pros long rained down respect and aspirations down from their lofty perch. Even if Apple didn’t make a lot of money from the pro market, its halo effect kept Apple alive in its darkest hours. Education turned kids into Apple fans, while creative pros showed adults how cool Apple’s kit is.

And Apple appears to have mostly blown off education when it comes to Macs, offering nothing that competes price-wise with Google Chromebooks or cheap Windows notebooks. And iPads—despite Apple’s plans to the contrary—are not suitable laptop replacements. They’re just not, and the proof is in the education market, where Apple has lost share, hence “Apple Is Doomed.”

An Apple Death Knell a Day Keeps Reason Away

But, here’s why Mr. Mampilly’s thesis belongs alongside such utterances as:

“Watch for the big fire sale. Pretty designs and overpriced blue plastic can only get you so far,” from Michael Kanellos in 2001.

Or maybe Michael Dell’s doozy from 1997: “I’d shut it down and give the money back to the shareholders.”

Here’s why: Kids are still getting a taste of Apple through iPhones and iPads, some in their own homes and some in schools. It’s the iPhone that led to the Mac’s resurgence, not the Mac leading to iPhone’s success.

But Mr. Mampilly’s argument is thus:

You see, Apple’s brand, reputation and customer loyalty begin with kids using its products. […] Now Google is forming that relationship with kids. Already my kids and their classmates are learning to use Google by using voice commands instead of typing.

Amazon is forming that relationship with kids as well through the use of its Echo devices and Alexa platform.

Again, I’m in sympathy with the idea that Apple is losing the smarthome race to Amazon Alexa—how is that even possible?—and to Google Home. But it’s a massive leap from that premise to “Apple Is Doomed.”

You can read the full article at Banyan Hill Publishing.

Bryan: It’s great to see that lunacy lives, and that fact-free assertion can still pass for evidence-based analysis (yes, I know that wording is out of favour with the current US administration; perhaps we’ll soon take a page from the Mao era and open re-education camps for those of us who can’t keep pace with the times). Although he begins with a real observation of fact, ie the presence of Chromebooks in the classroom, Mr Mampilly makes so many leaps of logic and assumption about behaviour and choice that one is at a loss as to where to even begin… Read more »

So much stupid packed in so small a space. I’m surprised it hasn’t breached a critical mass and caused a black hole destroying the earth. Maybe what’s doomed is our society, that this tool is ‘advising’ anyone.