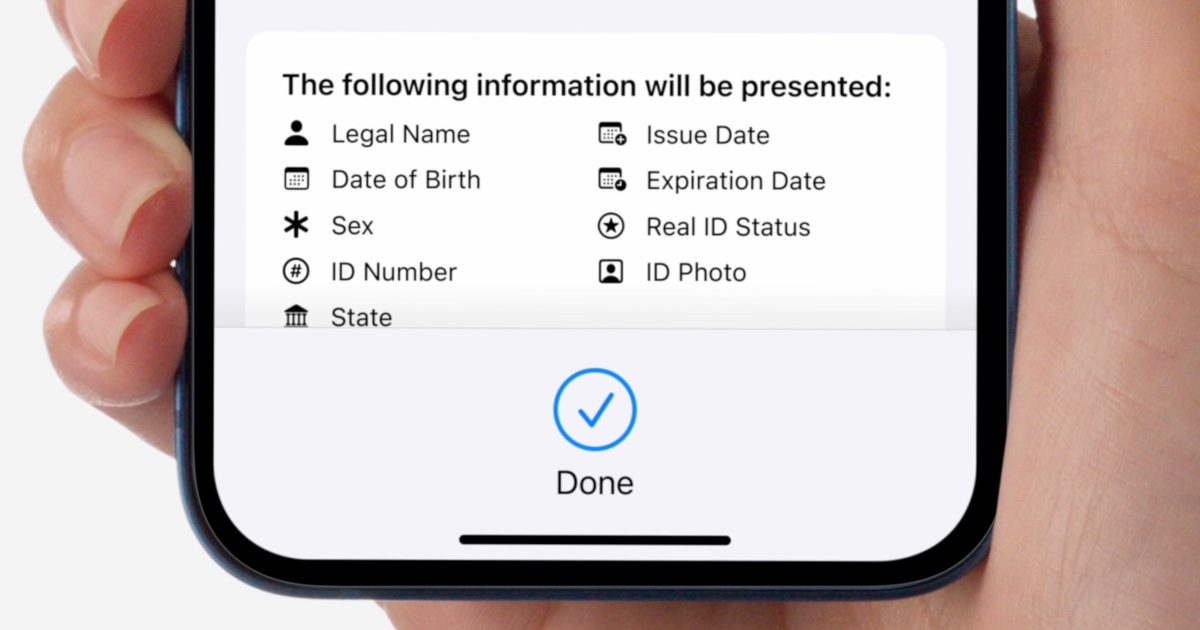 Reports indicate that Apple’s new digital ID feature may be hard for competing smartphone makers to replicate. This may be due to an agreement between Apple and the TSA.

New details are emerging concerning Apple’s partnership with the Transportation Security Administration (TSA) that shows Apple not only received an agreement giving the company first crack at running the tech, but has also had a key government patent system reassigned to the company.

June of last year saw Apple announcing an intention to bring a contactless storage system system to official documents, such as driver licenses and passports, much in the same way users are able to store payment information through Apple Pay. Apple released Digital IDs for the first time in Arizona, allowing residents to store digital copies of their state ID and driver license through the Wallet App.

While rollout has been rather slow, some 30 states are considering adopting Apple’s Digital ID.

Now, FinTech Business Weekly reveals that Apple has entered a partnership agreement with TSA in order to implement the new Digital ID feature.

The agreement, known as a Cooperative Research and Development Agreement (CRADA) shows Apple joining forces with TSA starting in March 2019. The research agreement brought forth a collaboration between Apple and the TSA to develop a technology that “reads” a mobile driving license at airport checkpoints while sharing from an Apple device.

According to Fintech Business Weekly,

The government agreement appears to give Apple control over key intellectual property and patents resulting from the research collaboration. While this is a common feature of CRADAs, and the government itself retains rights to the IP, it could put Apple competitors at a disadvantage in the race to develop a digitally-native, mobile-first identity credential.

Additional patent filings suggest the collaboration between Apple and TSA produced intellectual property related to using mobile identity credentials (MICs) as part of “Know Your Customer” checks, in merchant or peer-to-peer transactions, to secure medical records, and even for use in voter identification — all of which could end up controlled by Apple.

Essentially, Apple has exclusive access to government tech that other cell phone makers are may not be able to access, at least immediately. Journalist Ben Lovejoy explains that one feature of CRADAs is that they allow commercial companies to benefit from intellectual property created through them. Additionally, this can also include government patents seeing a reassignment to involved companies. According to sources, this is already the case for Apple.

Looking at the Patents

According to sources, the key patent from this collaboration is “Checkpoint Identity Verification on Validation Using Mobile Identification Credential”, which was first filed in April, 2020. Initial versions of the filing listed the applicant as the U.S. Government. All listed inventors were employees of the TSA.

August 2021 saw the government assigning the rights in the application to Apple.

However, in August, 2021, the government assigned its rights in the application to Apple. When the patent was granted in December, 2021, the applicant was listed as Apple Inc., rather than the US Government, and five additional inventors — Apple employees — were added to the patent.

There is speculation that the agreement may call for additional government patents to get assigned to Apple. However, key parts of CRADA are redacted, so there is no way to verify this information.

Should the patented tech prove to be essential to the implementation of digital government documents, Apple will have a legal obligation to offer licenses under FRAND terms: Fair, Reasonable and Non-Discriminatory.

While this may work in theory, practice seems to have shown that FRAND disputes can often result in lengthy legal battles, which of course would only further bolster Apple’s lead. Furthermore, this issue could also potentially create some issues for the U.S. Government, as some may start to accuse it of aiding and abetting Apple in anticompetitive behavior concerning Digital ID.