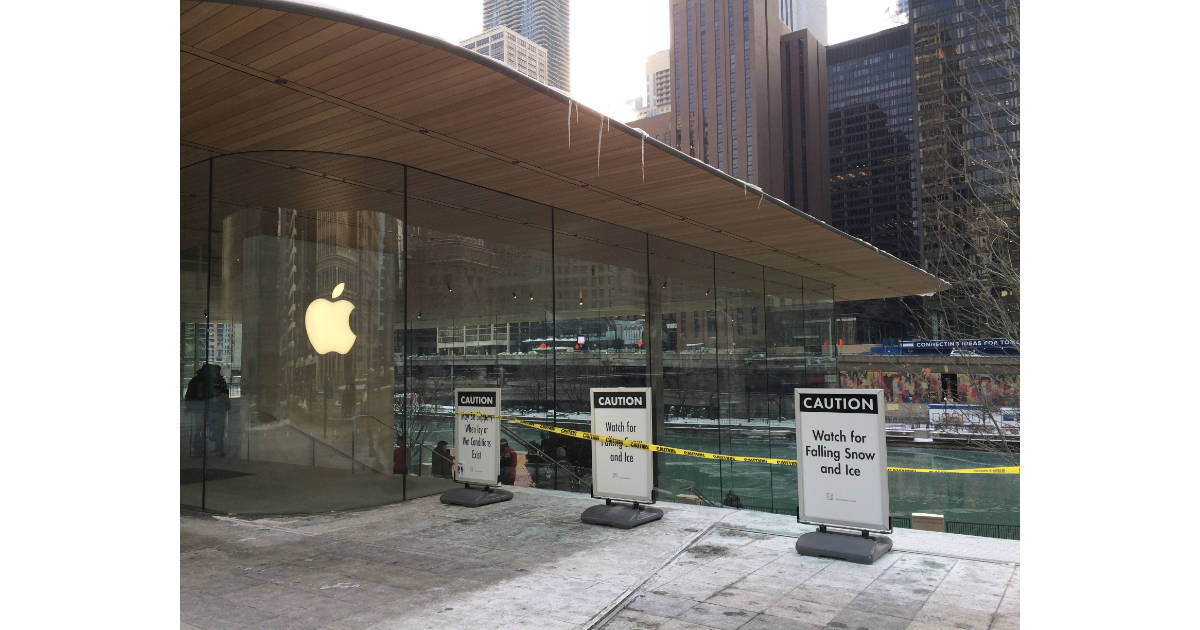 Apple’s new flagship store in Chicago is taking some online heat for the way its roof deals with ice and snow. Part of the area outside the store has been roped off to prevent injuries from falling ice and snow—something people say Apple should’ve considered in the building’s design.

Photos of the store and its roped off outdoors community area first appeared on the Spudart blog. The blog notes there aren’t any gutters to collect melting snow and ribs Apple for failing to account for Chicago’s cold and snowy winters.

Living in Colorado I’m used to seeing blocked off areas outside buildings in the winter because of snow and ice hazards. It’s just part of living in a climate where it snows.

Odds are the building’s architectural team took Chicago winters into account and felt the design tradeoff was worth it. The city didn’t seem to see it as a problem, either, because the design was approved and apparently there isn’t a building code requiring gutters.

That said, Apple has a reputation for clever designs, so it would’ve been cool to see something included in the roof that mitigated potential falling snow and ice without detracting from the building’s sleek lines. While this is just winter in the city, odds are someone is already working on their snowgate or iCEgate article now.

This is just one more example of Apple’s “form over functionality” approach to design (see the very beautiful but very awful MacBook Pro’s).

2018 is going to a very telling year for Apple with Jony Ive supposedly taking a more hands on approach to Apple product design. I’m pessimistic about what it means for two reasons: 1) the definition of a pessimist is “someone with experience,” and 2) what’s Jony been doing the past few years … designing things like the Chicago Apple Store! 🙁

Hate to say it, but this roof is almost ideal for creating ice dams. In addition to falling icicles, there is going to be an ongoing nightmare of leaks.

Apple can do better than signs and caution tape. 🙂 Heating and ice mitigation might help short-term, but the real answer is a redesign and replacement.

Good thing the Apple Execs looked at the plans before giving the green light to proceed ; ) A slightly opened MacBook with the hinge side facing the lake – hindsight is always 20/20. “Can’t innovate anymore my ass”

something people say Apple should’ve considered in the building’s design.

Or rather the architect should have.