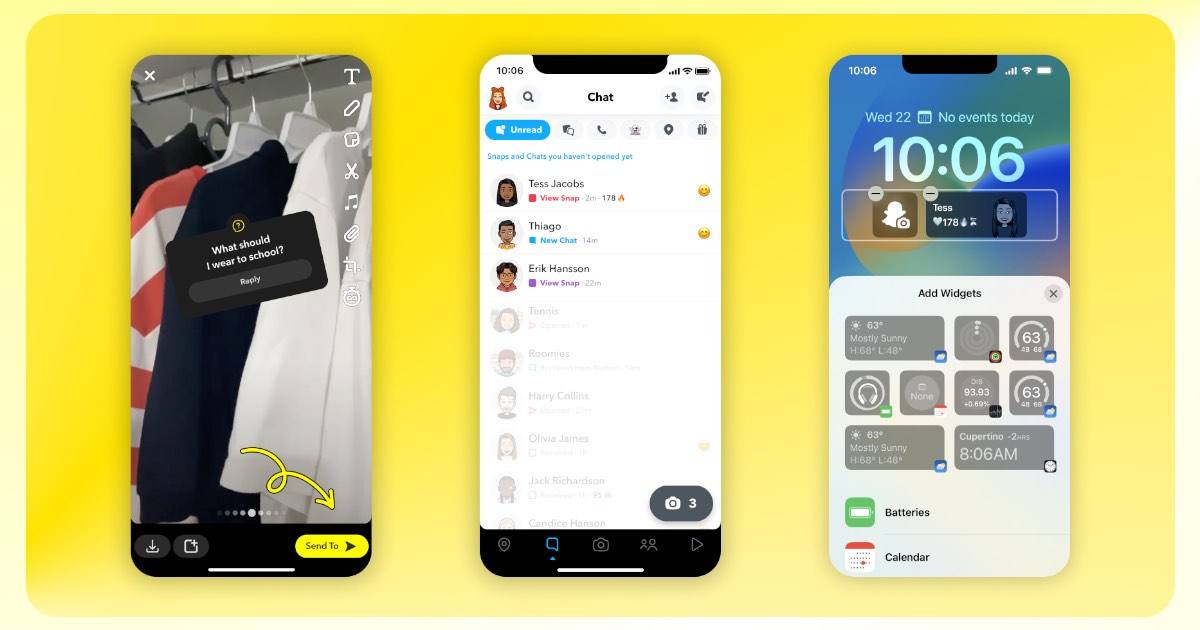 Snapchat is releasing a new update that looks to bring new features, including new Widgets for the iOS 16 Lock Screen. The company is but one of several looking to take advantage of the new Lock Screen for iOS 16.

In addition to Lock Screen widgets, Snapchat is looking to add additional features to the social media service by this fall.

For starters, Snap’s update brings several new features. This includes the new Lock Screen Widgets, now available for iOS 16, that will help users save conversations with their friends directly to their Lock Screen. Users will be able to chat with others using just a single tap. Users will be able to keep their conversations moving with direct access to the Snapchat Camera.

In addition to Lock Screen Widgets for iOS 16, Snapchat is also delivering new Chat Shortcuts. Available at the top of the chat tab, the new feature makes it easier for users to do things such as view unread Snaps and Chats from friends, see missed calls and reply to stories.

Snapchat’s new shortcuts will also remind users if they need to respond to someone, and will also show users when birthday’s are coming up. This new feature will be especially helpful for those that have trouble remembering dates.

Another new feature for Snapchat will be the Questions Stickers. Similar to a feature found on Instagram, Question Stickers allow you to add stickers to your Snaps that allows viewers to answer questions that you ask. According to Snap, “you can AMA-all-day from your Snapchat Story”.

Furthermore, just in time for school to return, Snap is also making Snapchat for Web available to everyone. Users can go to web.snapchat.com to maintain conversations with friends from any device.

According to Snap, the features are now available, or will be “coming soon”. So far, it does not seem that the new features have arrived to the App Store, so expect them to arrive soon.

Concerning Snap, the top of August saw the company releasing new parental controls, known as Family Center. The new feature allows parents and guardians to access who their teenagers have as friends on the social media, as well as provide “better visibility” to how teens may use the social networking app. Even with the new features in place, Snap says that it will still maintain the privacy of its users.

Are you looking forward to the new features arriving to Snapchat? Let us know in the comments.