iOS 10 is now installed on 76 percent of active iOS devices, according to new data published this week on Apple’s support website. Roughly four months after its release, iOS 10’s adoption rate is slightly faster than its predecessor, iOS 9, which hit 75 percent after the same period. 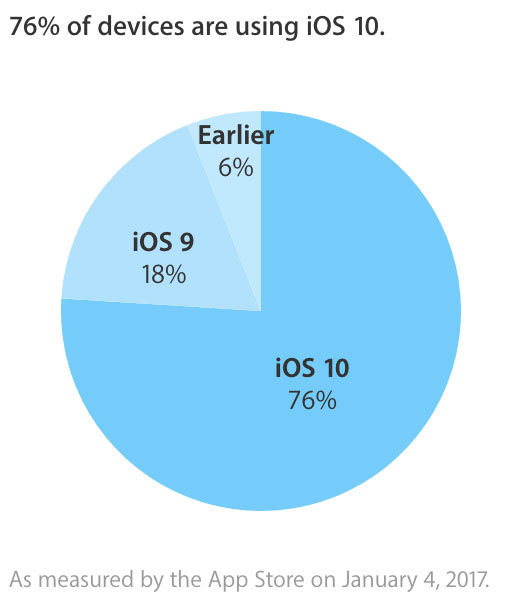 The holiday period gave iOS 10 adoption a big boost, jumping up from an install share of 63 percent at the end of November as consumers activated new devices. The launch of iOS 10.2 in mid-December, which introduced new emoji and several bug fixes, may also have encouraged some iOS 9 holdouts to finally make the jump.

Apple touts strong adoption of each new version of iOS as a key advantage of its platform compared to Android, where device makers often have control over software updates which produces a far more fractured ecosystem. For example, the latest version of Android — version 7.0 “Nougat,” released in late August 2016 — is only present on about 0.4 percent of devices, while more than 15 percent of Android users are still running version 4.0 “Jelly Bean” — originally released in 2012 — or older.

The next version of iOS 10, 10.3, is currently in testing and is expected to be released later this month.