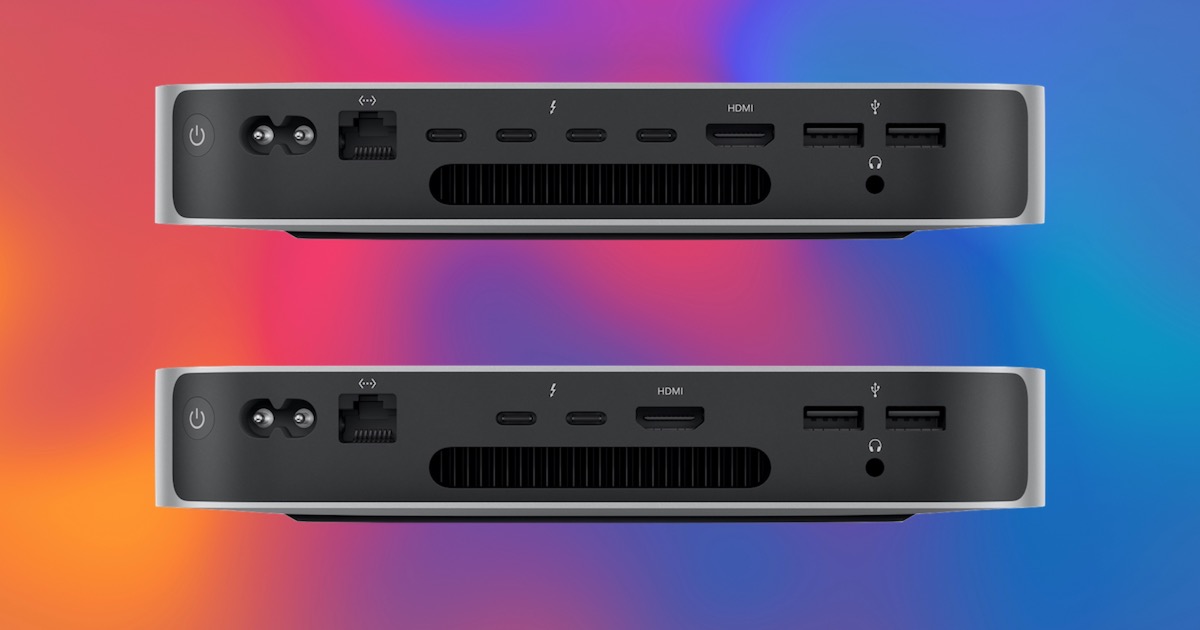 On Jan. 17, Apple unveiled new models of its Mac mini lineup. The announcement brings an end to the higher-end Intel-based Mac mini. The two variants announced both feature the M2 architecture. Now we have an M2 Mac mini on the low end and a model with M2 Pro for those needing more power. Let’s explore the M2 Mac mini lineup vs the prior M1 and Intel models.

If you already have an M1 Mac mini, you might wonder if upgrading is even worth it. For many users, this might not be a worthwhile investment, but Apple has lowered the starting price of the desktop computer even while upgrading its power and capabilities.

The Same, But Different

As you can see, the M2 Mac mini maintains almost the exact same exterior as its predecessor. It weighs the same, but is slightly wider and longer. It also has the same number of ports, so you might think connectivity is precisely the same between the two generations.

There is one key difference, though. The HDMI port on the M2 Mac mini supports better displays. With the previous generation, the computer could drive two displays: one 6K display with 60Hz refresh over Thunderbolt, along with a 4K display at 60Hz over HDMI. The M2 generation adds support for a 5K Thunderbolt Display at 60Hz.

Inside the case, things get more interesting. You’ve got the same 8-core CPU to start, but it’s somewhat faster and more power-efficient. You’ll also net two extra GPUs, and Apple has increased memory support to 24GB.

While the CPU core count remains the same, you should know that those cores run at a higher clock speed of 3.49GHz, compared to 3.2GHz in the M1. Apple has already improved the Neural Engine, which can now process up to 15.8 trillion operations each second.

Memory bandwidth is also improved. The M1 Mac mini could only access its unified memory at up to 68.25GB/s, but the M2 has a memory bandwidth of up to 100GB/s. The M2 SoC also includes Apple’s new Media Engine, absent from the M1.

What this means in terms of performance is up to 2.4 times faster ProRes encoding in Final Cut Pro. Filter and function performance in Adobe Photoshop is up to 50% faster. For gamers, your Resident Evil Village gameplay will be up to 35% faster.

Let’s move on to the higher-end Mac mini, now powered by M2 Pro. Apple doesn’t offer a comparison between the older Intel-based Mac mini and the new M2 Pro model. Instead, Cupertino compares the computer with the more powerful 27-inch iMac with Intel Core i7 and Radeon Pro 5500 XT graphics.

Under this comparison, creatives should see immediate benefits.

According to Apple, this means the M2 Pro Mac mini can handle high-performance tasks that, previously, you wouldn’t even think about with such a small form factor desktop.

Apple does offer one comparison between the Intel-based Mac mini and the new generation: gaming performance is up to 15 times faster with the M2 Pro chipset.

Like the base model M2 Mac mini, the higher-end variant gets you Wi-Fi 6E support and Bluetooth 5.3. In terms of display support, the M2 Pro Mac mini can drive up to three monitors: