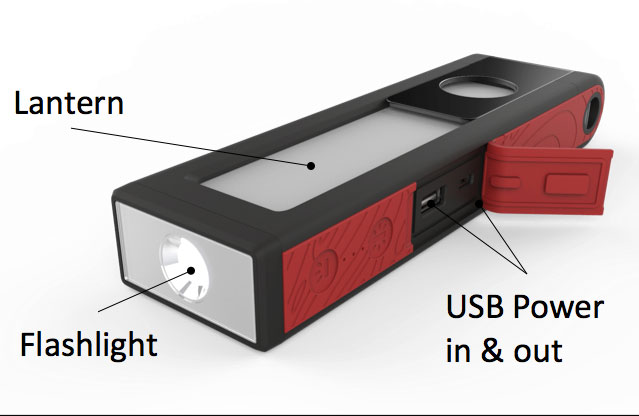 Makers4Good have a project on Kickstarter called HELIO that I’ve been testing for a few days. It’s a solar-powered portable battery with a built in lamp and emergency beacon. And the company is doing something very cool: 100% of the profits from HELIO will be used for charities working to bring solar power and light to the developing world.

The company sent me a HELIO prototype in advance of the Kickstarter launch. It sports a 5,200mAh battery, which is beefy enough to charge an iPhone 7 a couple of times, with some juice left over. It’s enough to make a dent in a tablet.

I haven’t done extensive testing yet, but the company told me it would take more than a full day to charge the battery to full using just the solar cells on the back. Fortunately, you can also charge it through the microUSB port next to the USB charging port.

The front face of HELIO is a lamp, and there’s a flashlight on the end, too. Both of those lights have three power settings, and they’ll flash in an SOS pattern, too. Plus, there’s a low-power Infinite Red mode that will run indefinitely on one hour of sunlight.

That makes this device good for emergencies, camping, or keeping in the car.

HELIO is heavy because it has a big battery. It also has a built-in stand that folds out from the bottom and sits flush against the front lamp when closed.

HELIO blew past its US$10,000 funding goal in two days, topping $18,000 with 48 days to go. As of this writing, there are Early Backer pledges that will get you a HELIO for $49. There are bigger pledge levels, too.

The company has a working prototype that I’ve worked with, and I think it would be a good addition to anyone’s emergency kit. The fact that they’re dedicating the profits to an effort I think is great is icing on the cake.