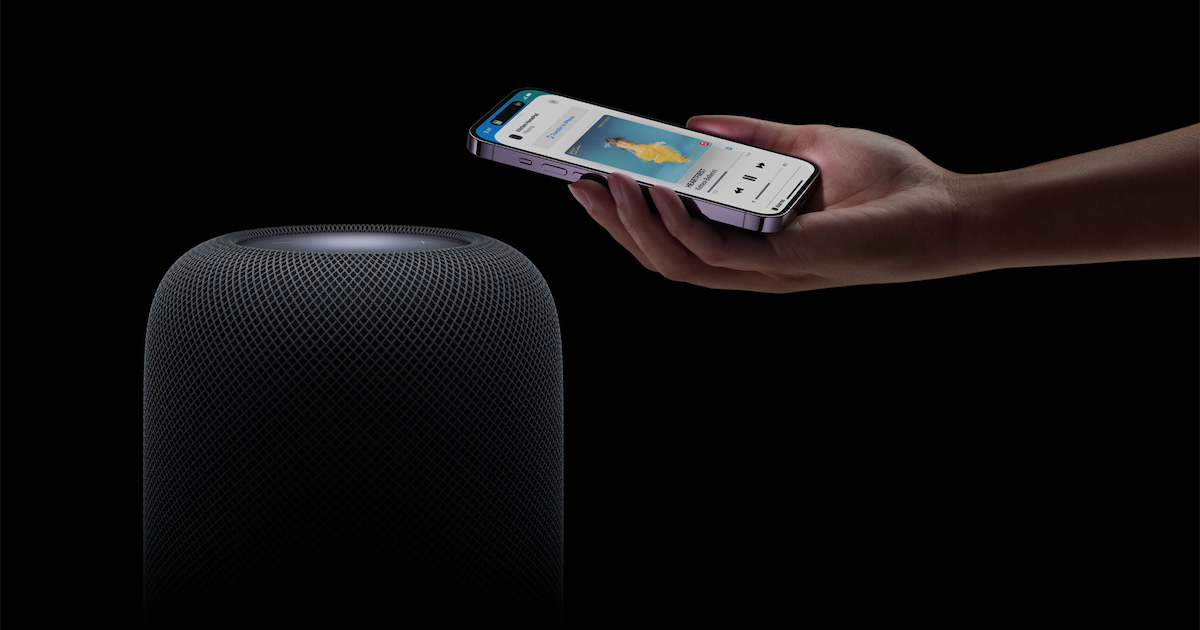 As was widely rumored, Apple relaunched the original HomePod on Wednesday in its second generation. The upgraded smart speaker brings more features and capabilities, including new ways to manage everyday tasks and control your smart home.

It’s the Same As It Was, But Different

Inside, Apple has included its S7 chip for computational audio, fully supporting Dolby Atmos and spatial audio tracks. It also packs a four-inch high-excursion woofer and five tweeters. Four microphones help you talk to the device.

Even though the upgraded OG HomePod has two less tweeters than its predecessor, Apple says the audio performance should be even better. As with other models, the room-sensing technology allows HomePod to figure out if it’s in the open or near a wall, precisely beam forming the audio to offer an immersive experience.

Following Apple’s decision to support Thread and Matter, the second-generation full-size HomePod can be at the hub of that. The device fully supports HomeKit as a hub, the Matter standard and Thread as a border router.

Even better, Apple has implemented Sound Recognition in the HomePod lineup. It can listen for smoke and carbon monoxide alarms, sending a notification directly to your iPhone if it detects one.

Furthermore, Apple integrated a temperature and humidity sensor, allowing users to create scenes that measure the indoor environment and take action accordingly. Your HomePod can now automatically close the blinds or turn on a fan when the room reaches a certain temperature.

Integrating Even Deeper Into Apple’s Ecosystem

The Cupertino-based company has also offered tighter integration between the HomePod and your other Apple devices. The U1 Ultra Wideband chip continues to offer handoff technology, but that’s only the start.

Find My on HomePod makes it even easier for users to location other Apple devices like an iPhone. It will play a sound on the misplaced device. What’s more, now you can use Siri to ask for the location of friends or loved ones who share their location via Find My.

Pricing and Availability of the New HomePod

Apple has opened up orders for the new HomePod already. It’s available in both white and midnight color options for $299. In-store availability and deliveries to customers is set to begin Feb. 3.

Initially, the new generation of the HomePod is available to order online or from the Apple Store app in Australia, Canada, China, France, Germany, Italy, Japan, Spain, the U.K., the U.S. and 11 other countries and regions. No word yet on availability for the rest of the world.