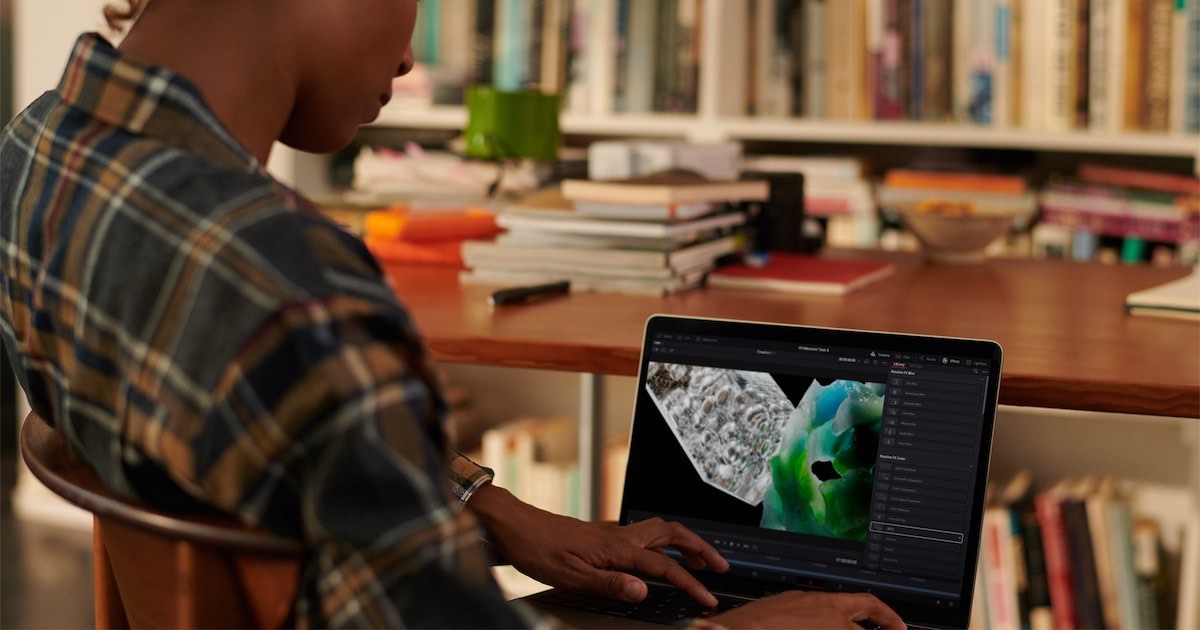 I’m going to be making a comparison between the M1 and M2 MacBook Pro models to hopefully help customers determine what is the right device for them. The next-generation of MacBook Pro is here, and they deliver a wealth of new features and upgrades, including being powered by either the new M2 Pro or M2 Max. Not only do the new chipsets bring more power to the MacBook Pro, but support for up to 96GB of RAM, 8K output via HDMI and more also adds new dimensions and specs to the machines.

With that in mind, how do the new M2 MacBook Pros stack up against the M1 models? Taking a look at the specs, features and price-points, I’m going to show you what may be the best bang for your buck. Continue reading to find out more.

In late 2021, Apple introduced new MacBook Pro devices equipped with either the M1 Pro or M1 Max chips. With this arrival came CPUs featuring 10 cores, alongside GPUs capable of reaching 32 cores. In addition to these features, the late 2021 series of MacBook Pros also included a 1080p webcam, an update to the I/O array including HDMI, SD and MagSafe, as well as a Liquid Retina XDR Display that includes mini-LED backlighting.

Concerning the new M2 Pro and M2 Max MacBook Pros, not only do they arrive with increased performance, but they also include up to 96GB of RAM, 38-Core GPU, 12-core CPU, Wi-Fi 6E, 8K HDMI and more. Of course, it’s also worth mentioning that the MacBook Pro featuring the M2 chip that arrived in 2022 is more on par with a M2 MacBook Air rather than the next-generation of MacBook Pro.

One of the most notable things about the new MacBook Pros would be the new M2 Pro and M2 Max chipsets. Concerning the M2 Pro, Apple has stated that it is capable of delivering 20% faster CPU and 30% faster GPU performance over the M1 Pro. This is largely in thanks to the 12-core CPU and 19-core GPU. Additionally, the M2 Pro neural engine has a 40% increase in speed over the M1 Pro. 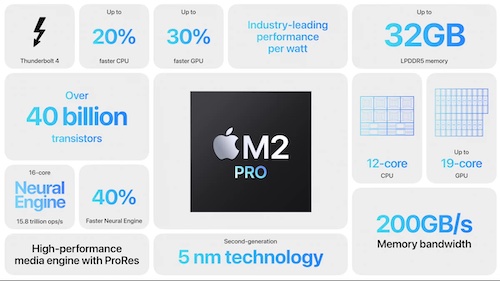 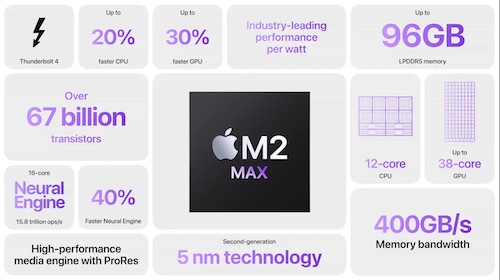 More About the M2 Chipsets

Additionally, just like the M1 Pro and the M1 Max, both the M2 Pro and M2 Max include media engines dedicated to offering additional hardware-accelerated support, including H.264, HEVC, ProRes and ProRes Raw. While Apple stated that doubling the ProRes support will “dramatically accelerate” both media playback and transcoding, it is worth noting that the M2 Max chip does not include two video encoding engines like its predecessor the M1 Max.

However, it is also worth noting that the overall transistor count for the next-generation chips have increased dramatically, the overall count jumping from 33.7 billion on the M1 Pro, to 40 billion on the M2 Pro. There is also an increase in the Max series, with the M2 Max sporting 67 billion transistors over the 57 billion found in the M1 Max.

Looking at the Display

Concerning the 2021 series of MacBook Pro models, one of the coolest features was the Liquid Retina display, which many consider a great advancement. Capable of featuring double the sustained brightness when compared to past mini-LED backlighting, the display also includes an increased resolution, reduced bezels as well as ProMotion featuring up to 120Hz refresh rates. 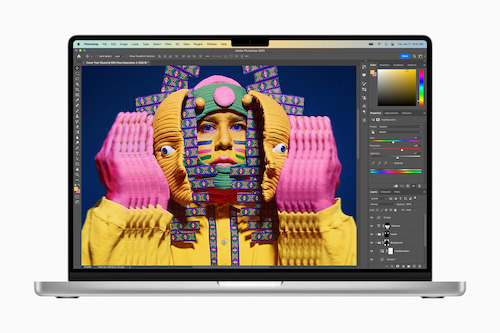 For the new M2 MacBook Pro series, the displays will also feature the same specs. This includes 14.2” and 16.2” display options. Furthermore, the new displays also feature a notch at the top-center of the display that includes a 1080p FaceTime camera, which is again similar to the 2021 models. However, it is worth noting that Face ID is not included with the M2 MacBook Pros.

When it comes to the I/O ports of the M2 MacBook Pros, they feature nearly identical ports and layouts as the M1 MacBook Pros. Along with the HDMI port, SDXC card reader and 3 Thunderbolt 4/USB-C 4 ports, the new machines also include MagSafe charging. 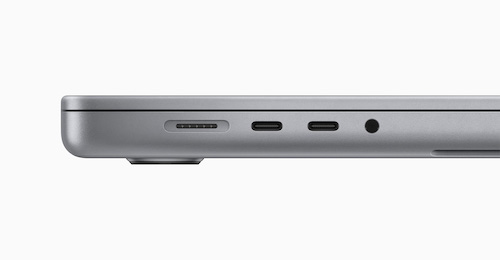 However, it is worth noting that the M2 MacBooks do take things up a notch, in thanks to an upgrade to the HDMI port that brings them from 2.0 to 2.1, while also supporting 8K output at 60z as well as multichannel audio output. Additionally, there’s also the upgrades to Wi-Fi 6E and Bluetooth 5.3 with the M2 series of MacBooks.

Physical Dimensions and Battery Life of the M2 MacBook Pro

In terms of size, the M2 MacBook Pro series features the same physical dimensions as the 2021 series of MacBooks. The next-generation will also come in the some color options: Space Gray and Silver.

In terms of battery life, however, Apple was able to take the great battery life of the M1 series and extend it even further. Now, both the 14” and 16” M2 MacBook Pros feature an additional hour of battery life when it comes to video playback and wireless web-use when compared to the M1 models.

This means that the 16” M2 MacBook has up to 22 hours of video use, whereas the 14” M2 sees 18 hours of video playback from a full battery. Additionally, the new M2 series is also capable of fast charging, as with the 2021 models. Users can charge a battery to 50% in just 30 minutes.

When it comes to price, things are roughly the same for base and middle-level configurations that are standard, whereas custom builds of the M2 MacBook Pro can greatly increase the price.

Making the Comparison: Go With the M1 or M2 MacBook Pro?

While the new upgrades in the M2 MacBook Pro series are extremely impressive, they may not be something that everyone necessarily needs. If you need to use your device for intense video editing or image processing, looking into the new series of MacBooks may be in your best interest. Additionally, those that are looking to game will get a lot out of a beefier CPUs and GPUs. 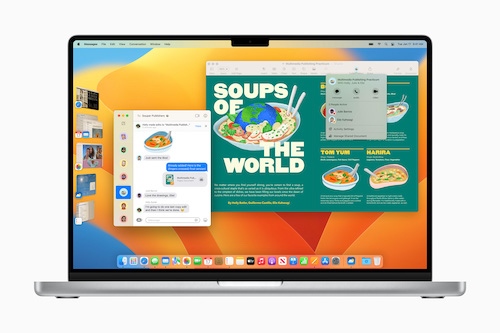 However, those that use their device for simpler tasks may not find the upgrade to be worth it, especially if you already have an M1 MacBook Pro. If you absolutely need to have the latest and greatest, then you’ve likely already made up your mind. Furthermore, if you are coming from an Intel-based machine, the upgrade may be worth it for you.

If you are having trouble determining whether to go with the M2 Pro or the M2 Max, it’s worth noting that they both arrive with a 10 or 12-core processor. The largest noticeable difference is the additional GPU power. The M2 Max chips also allow for increased external display support, if that is something that needs consideration when choosing what to purchase.

The new M2 MacBooks offer a lot for users, though some of the more powerful options may be a bit too much for the more casual consumer. When making a new purchase, be sure to go over the details carefully so that you get a machine that brings you the most satisfaction.