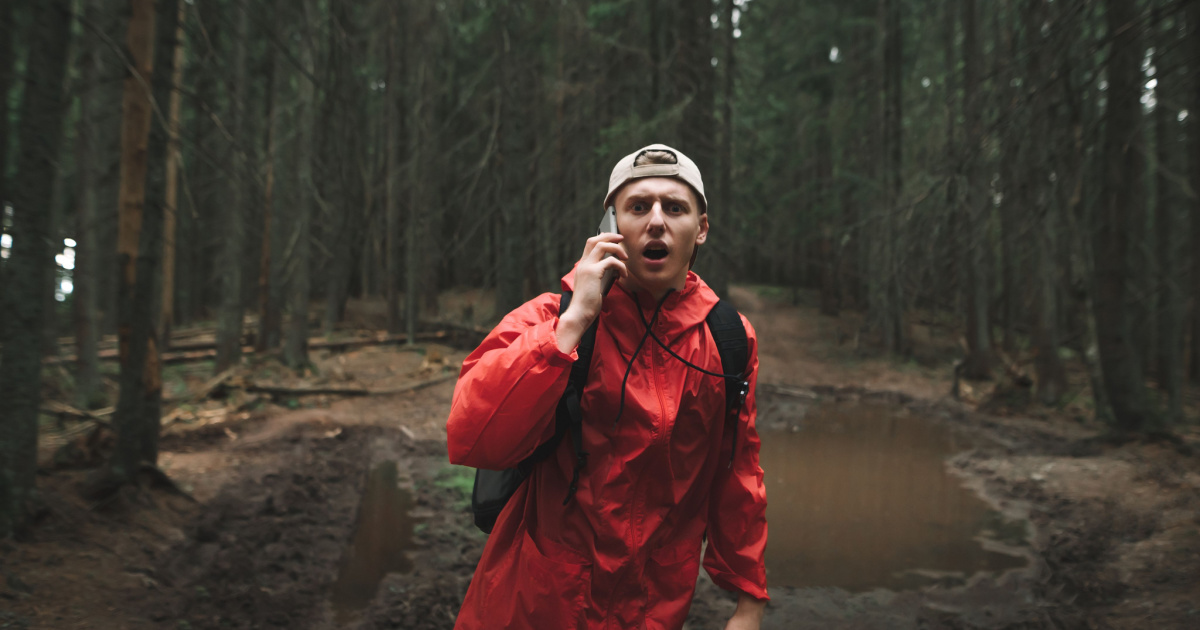 Apple on Tuesday turned its Emergency SOS via Satellite feature live. Available on all iPhone 14 models, the feature lets users contact emergency services even when out of range of cell or Wi-Fi connections. To allow consumers the ability to familiarize themselves with using Emergency SOS via Satellite, Apple offers a demo mode. Here’s how to use it.

First Things First, You May Need to Update Your Medical ID

You may have already noticed the Settings app on iOS 16 asking you to review your Medical ID. The service sends details from your Medical ID to first responders. Therefore, you’ll want to be sure the information is up to date.

Shortly, you’ll be finished reviewing and confirming the contents of your Medical ID. With that done, you can test Emergency SOS via Satellite in demo mode.

To get started with the practice session, go to Settings > Emergency SOS on your iPhone 14. Scroll down and find Emergency SOS via Satellite, then tap Try Demo. The service is only available in the U.S. and Canada right now, so it may not be available to you. Apple does plan to extend the service to France, Germany, Ireland and the U.K. in December. Other countries should see it after that. 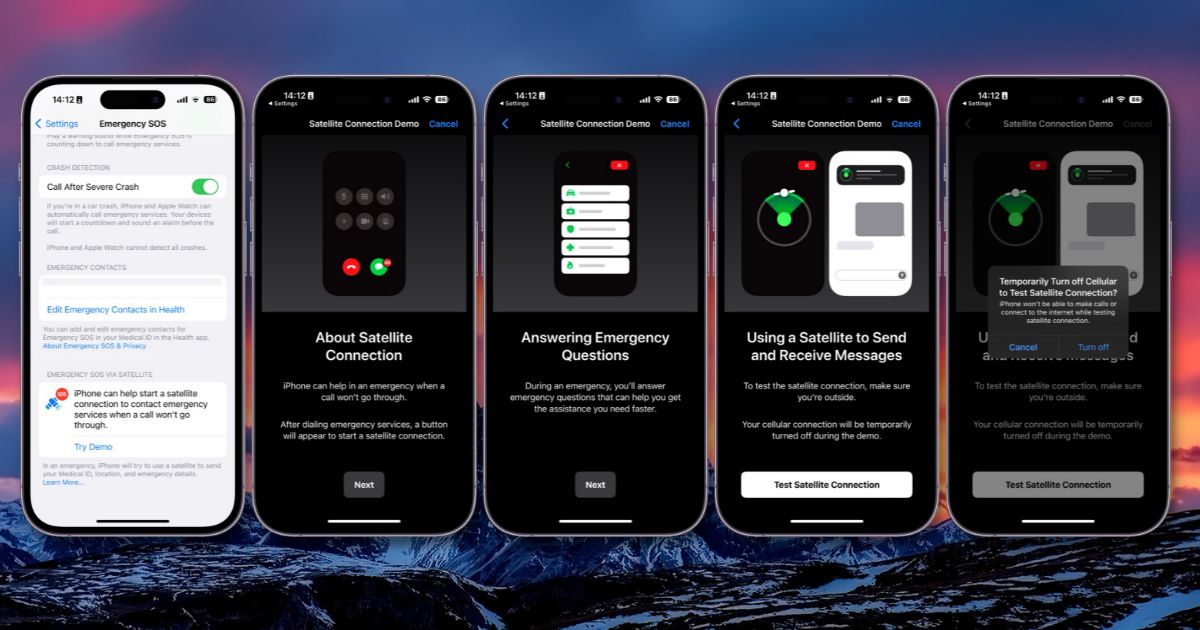 When you launch the demo, your iPhone will explain how it works and what to expect. Communicating through a satellite takes considerably longer than across cell towers. Therefore, the feature uses menus and short answers to provide information to emergency dispatchers. 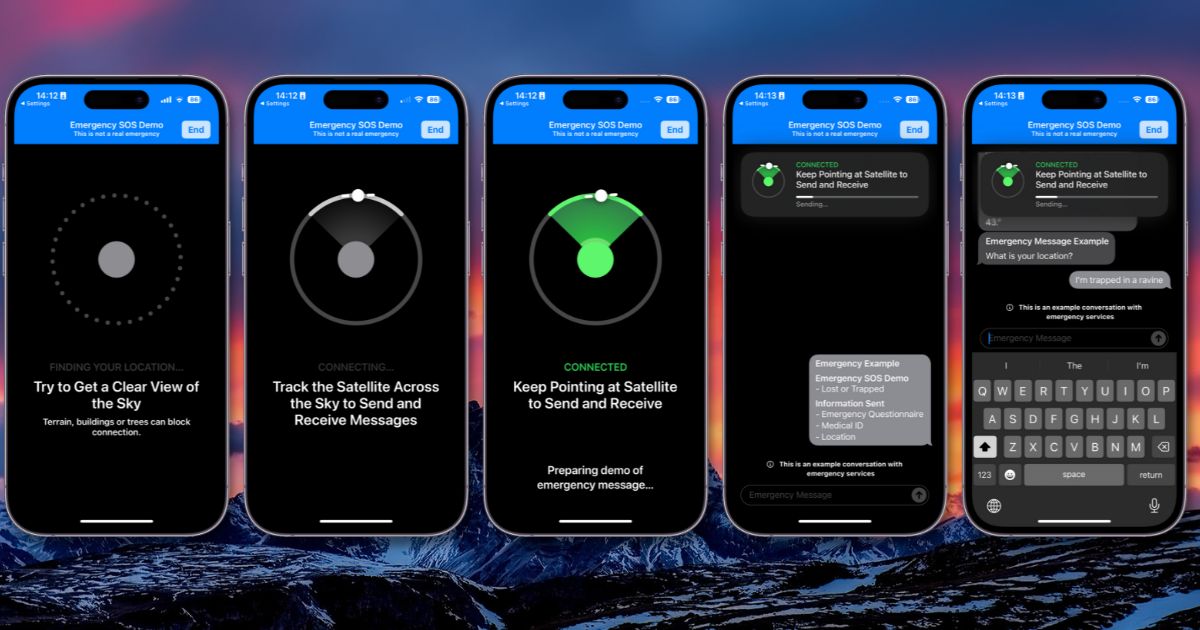 The Emergency SOS via Satellite demo will turn off your cellular service during the demo, so bear that in mind before you begin. The app will guide you through pointing your iPhone at the nearest satellite and establishing a connection.

Once your iPhone has established a satellite connection, it will walk you through an example of how such a session might go. It doesn’t present the menus its live counterpart will offer, but the demonstration does give you an idea of what dispatchers might ask. 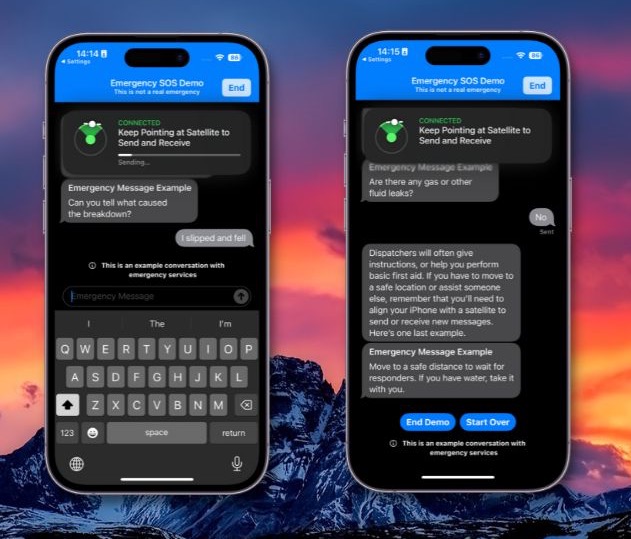 I ran through the demo three times in preparing the screenshots, and it seems to be geared towards a vehicle breakdown of some sort. Even when I said I had slipped, fallen and was trapped in a ravine, the demo asked me if there were any gas or fluid leaks. Nevertheless, the experience gave me an idea of what to expect if I need to use the feature in a real-life emergency.

Since satellites move quickly across the sky, the demo also sets your expectation well for maintaining that connection. Several times, I had to turn from side to side in order to catch a connection with the next satellite to pass overhead. In some instances, it even told me there might be terrain or other obstacles blocking my iPhone’s satellite connection.

In these cases, the demo suggested how to get into a more favorable location for continuing the session. This is very akin to how an emergency response might work in real life, as you may find yourself flanked by tall, thick trees and foliage or cliffs.

It’s definitely a boon to have the demonstration mode. In terms of disaster or emergency preparedness, practice saves lives. Even those who don’t pursue such off-the-grid activities as mountain climbing or hiking could benefit. Should a natural disaster strike and take out power and cell networks, Emergency SOS via Satellite will help get the word out to first responders.

If you believe you may one day need to use Emergency SOS via Satellite, run through the demo mode a time or two. This is a far better option for practicing than activating the feature for real, and possibly tying up emergency services dispatchers whose attention might be needed elsewhere. Plus, it saves you from needing to drive out to a remote location lacking available cell towers.