Messages in iOS 10 changes a fundamental way your iPhone (or iPad) camera works: if you take a photo from the mini-camera widget, it doesn’t save to your camera roll. But if you use the full camera app, it does. Here’s how to understand, manage, and control what gets saved where and what doesn’t get saved in Messages Photos.

People more focused on using Messages as an SMS-like tool are likely to be confused by this change. While researching this, I found many user complaints, including some on Apple’s support site. What I think Apple is going for, though, is something more like SnapChat and other social media networks where moments are meant to be fleeting—captured and forgotten.

In addition, there are many times when you might wish to share a photograph with someone, but don’t want that photograph synced to your other devices or to Photo Stream or iCloud Photo Sharing.

Rather than thinking of this change as a nuisance, consider it as being empowered with more control over our data in a context-appropriate manner. Plus, it’s still easy to take a picture that does save to your camera roll, as I’ll show below.

What Doesn’t Get Saved

Open up a chat with someone in the Messages app, like the one below with a goofball named Jeff Gamet. Tap the drawer: 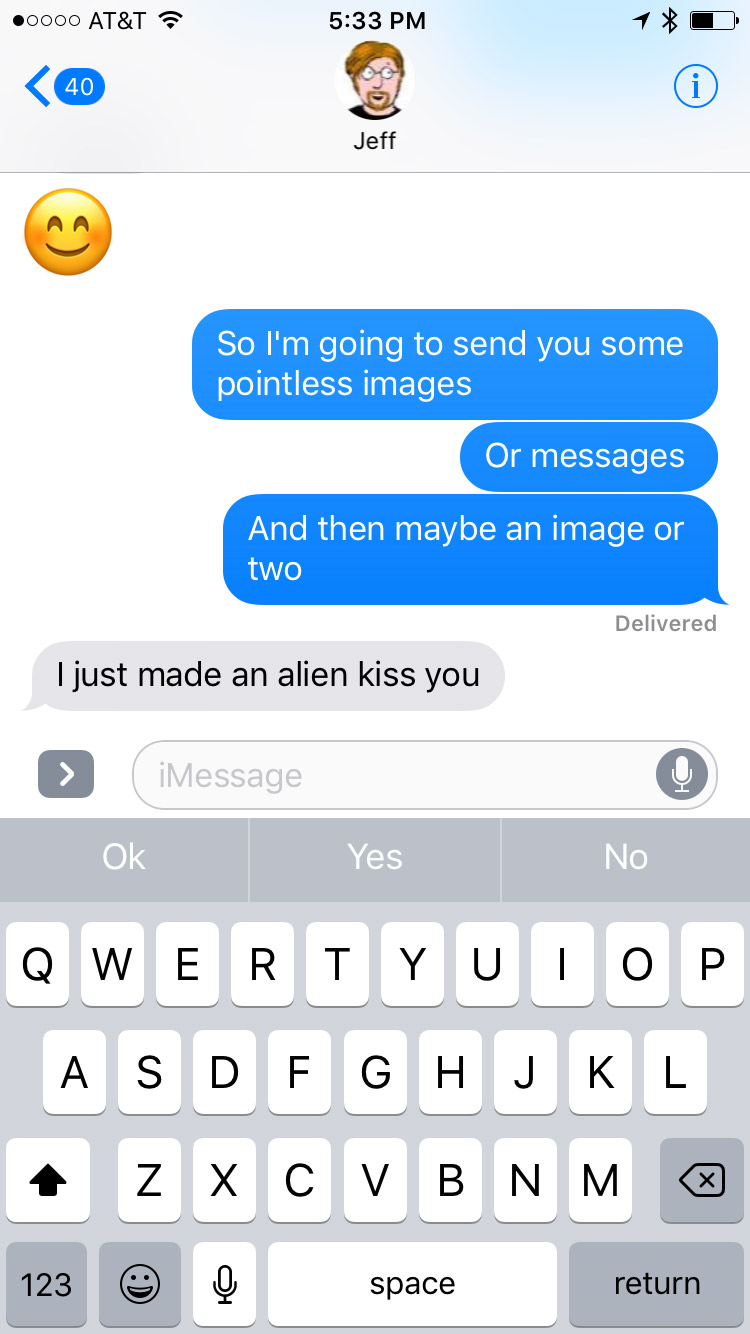 Then tap the camera icon: 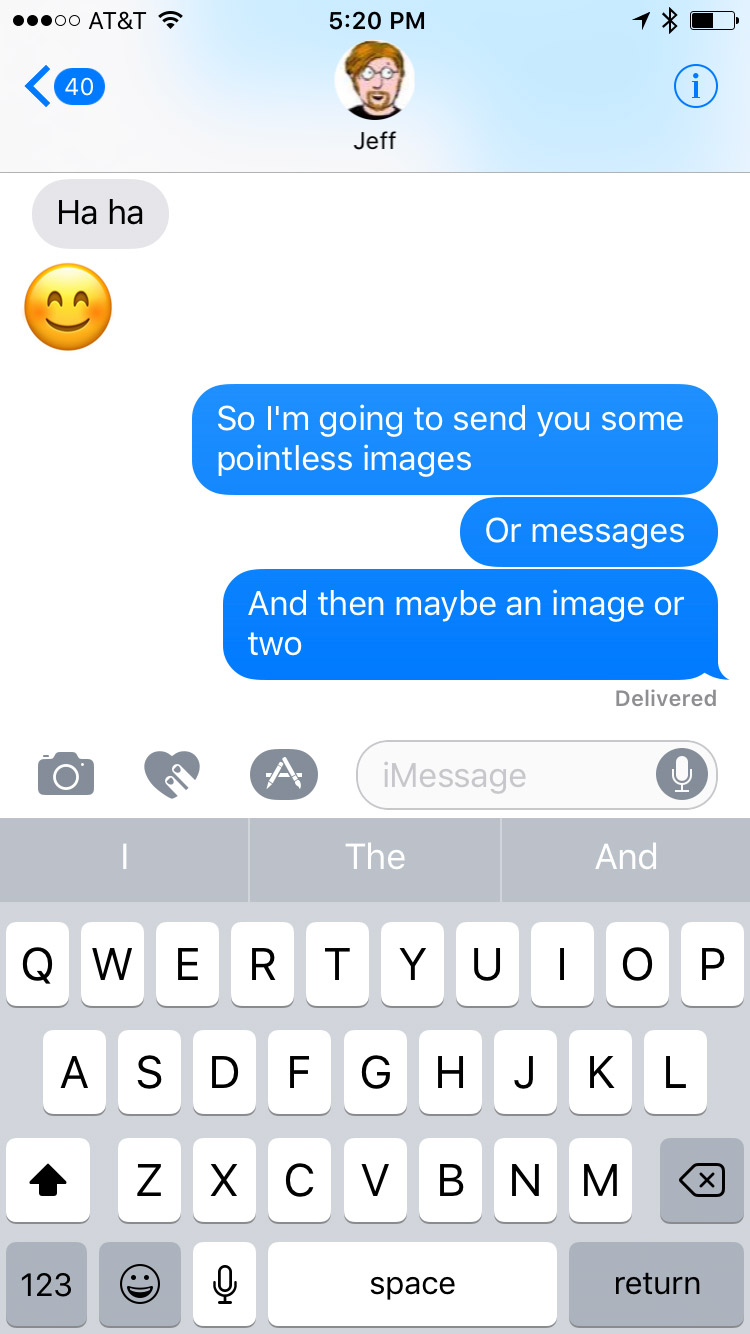 And you’ll see something like this, though probably with less jade plant: 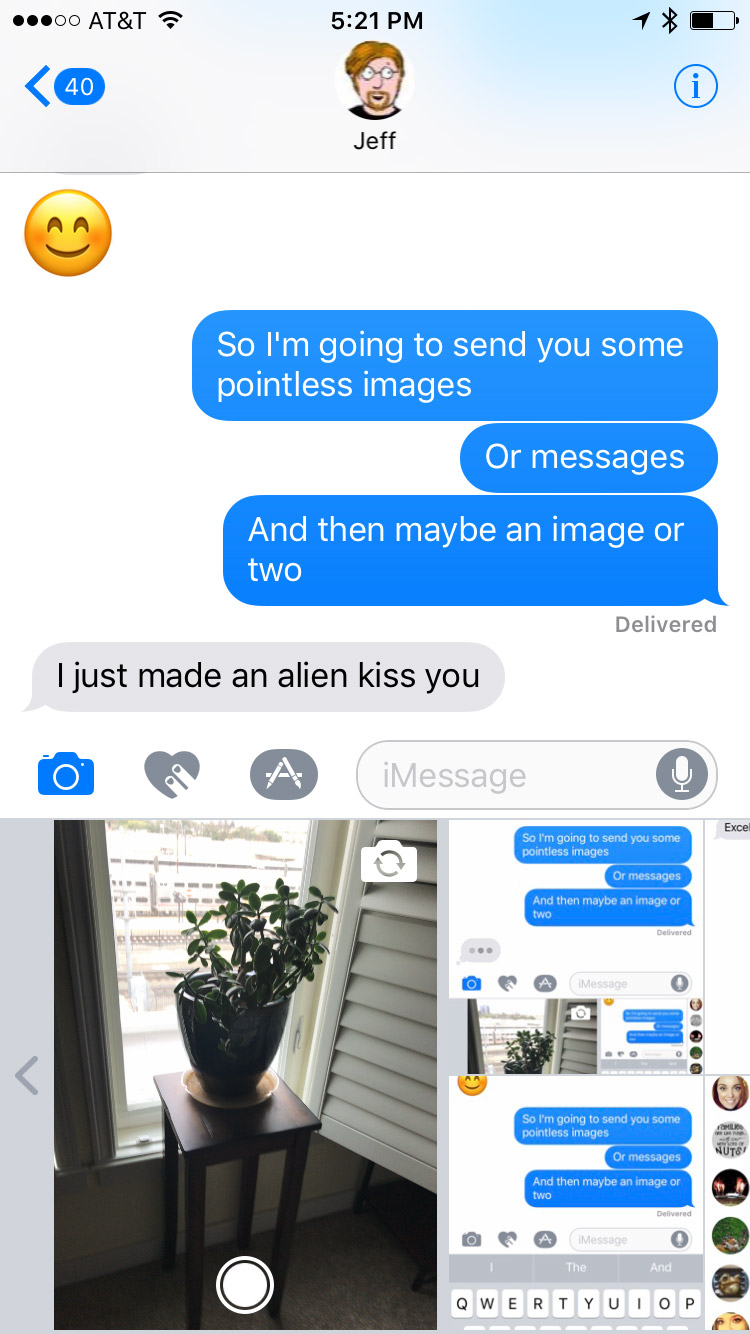 That live preview window is the view through your camera. Some are calling it a mini-camera. I couldn’t find documentation for what Apple calls it, so let’s go with that term. If you take a picture from the mini-camera, the image will be sent to your chat where you can then choose to send it to your friend. You can delete it by tapping the “x” in the corner. 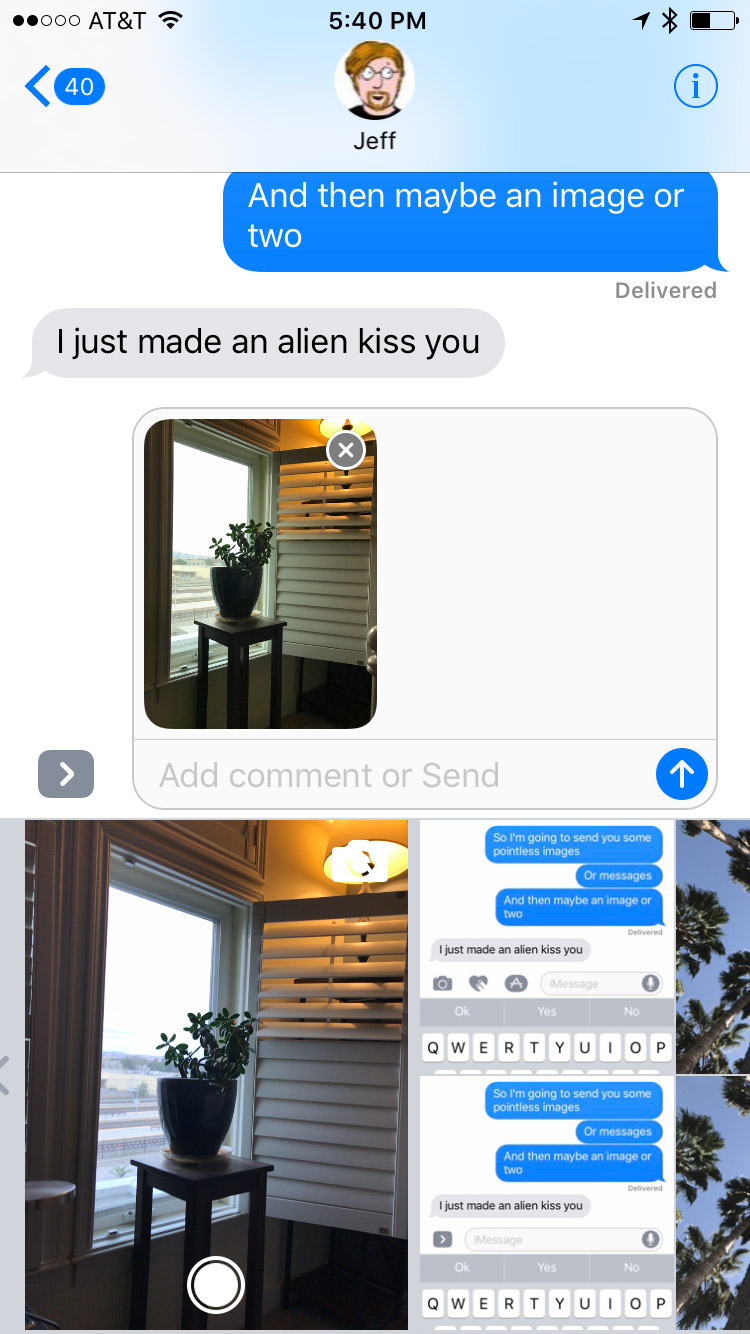 Mini-Camera Photo Sent to Your Message

Bonus Tip: You can take multiple images this way before sending any of them. Each one will have an “x” for deleting it from the chat.

These images are not saved. They are not synced to your other devices (save in the same chat in Messages), and they are not sent out to Photo Stream or iCloud Photo Sharing. They are sent to your friend and off your phone. Unless, that is, you choose to save them one at a time. To do that, tap on a photo in your chat, Share > Save to Camera Roll. Some call that absurd, but I think this new approach is a delightful, added feature.

What Will Get Saved

The main reason I see it this way is because you also have access to your full camera from inside Messages. If you swipe the mini-camera to the right, you’ll find two icons. One is for your camera, and one is for your Photo Library, as shown below. 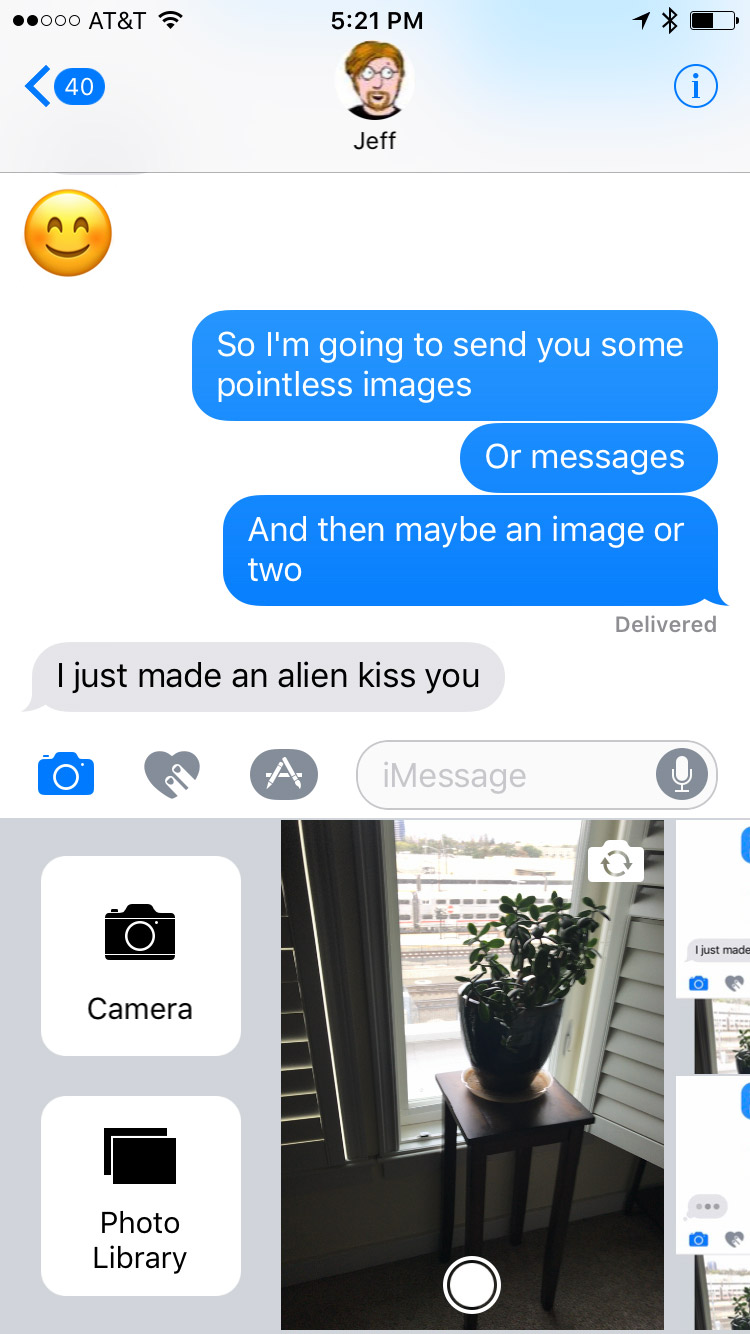 If you tap Camera, you get the full-screen camera just like you used to in iOS 9 (and earlier). Any photos taken from this screen will be saved to your Camera Roll.

Bonus Tip 2: If you swipe to the left, you get your recent photos form your Camera Roll.

You May Wish to Think Differently about iMessage Photos

I believe the haters view the mini-camera as a reduction in functionality. I see it as a new feature, though, one that sits on top of the old functionality. It’s especially aimed at younger users who live in modern social networking platforms. This aging writer thinks its nifty, too.

With iOS 10, Apple has transformed iMessage (and the Messages app) from a best-in-class SMS/texting tool to a bona fide contender as a social media platform. Stickers, Scribbles, heartbeats, kisses, apps, and even fleeting images are all part and parcel to the way many people think about sharing and communicating with the world.

They changed this back in iOS 12 and I am very annoyed. Does anyone know a way to go back to the old way? I don’t want every silly pic I take for text conversation to save to my camera roll.

Well that explains why some photos I took yesterday didn’t get saved.

Will this mini-camera feature appear in any other apps? Notepad fror example? I take a fair number of pictures for work that I need for like 10 minutes. Later I have to go through my library, on each device, and delete these shots from the library. If I could use, for example, Notes and take them there it might be more convenient. Better yet if I could access it from the lock screen…