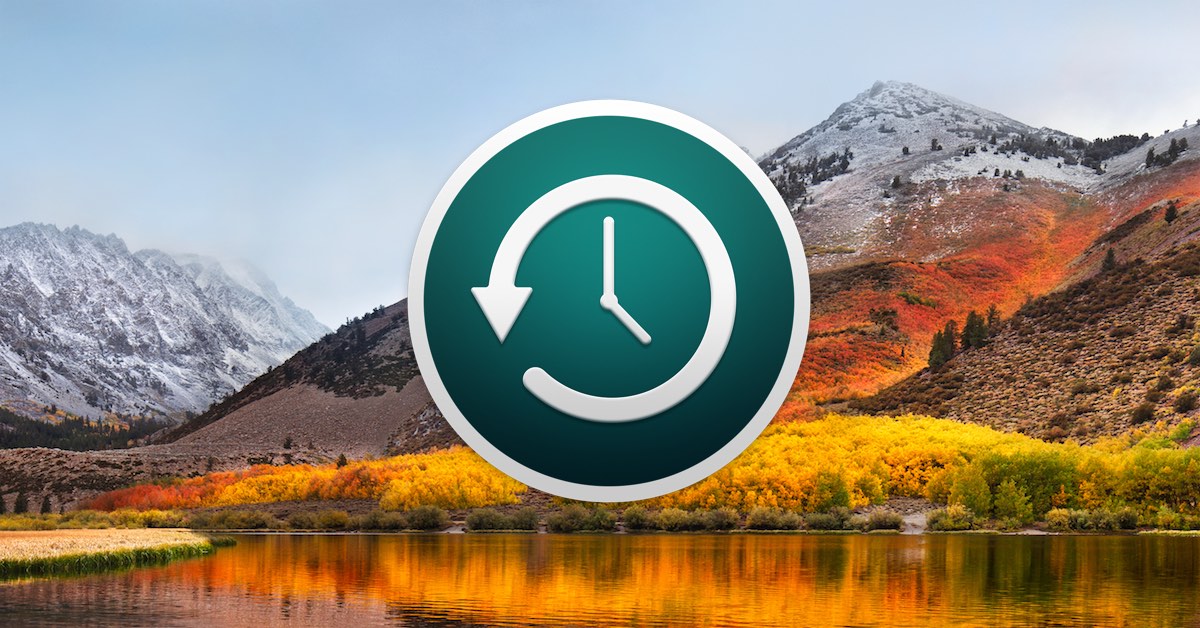 As Apple notes on its support pages, Time Machine now keeps what are called local snapshots on the startup disk for your Mac, meaning that you can restore data even when you don’t have your backup drive handy. As you can read in that article, High Sierra will also create a snapshot automatically before doing operating system updates. Neat!

If you need to recover stuff from one of these snapshots, though, the way you’ll go about it depends on what you’re trying to do. If what you need is just a file or two, then you’ll simply restore from Time Machine the way you normally would; if you find, though, that you need to roll back your entire system, you can do it through macOS Recovery. To get started with that, shut down your Mac, and then press the power button to turn it back on. Right after you do so, hold down Command-R on your keyboard until you see the Apple logo appear. When the machine finishes starting up, you should be within macOS Recovery, which’ll give you a number of options for helping out a misbehaving Mac: 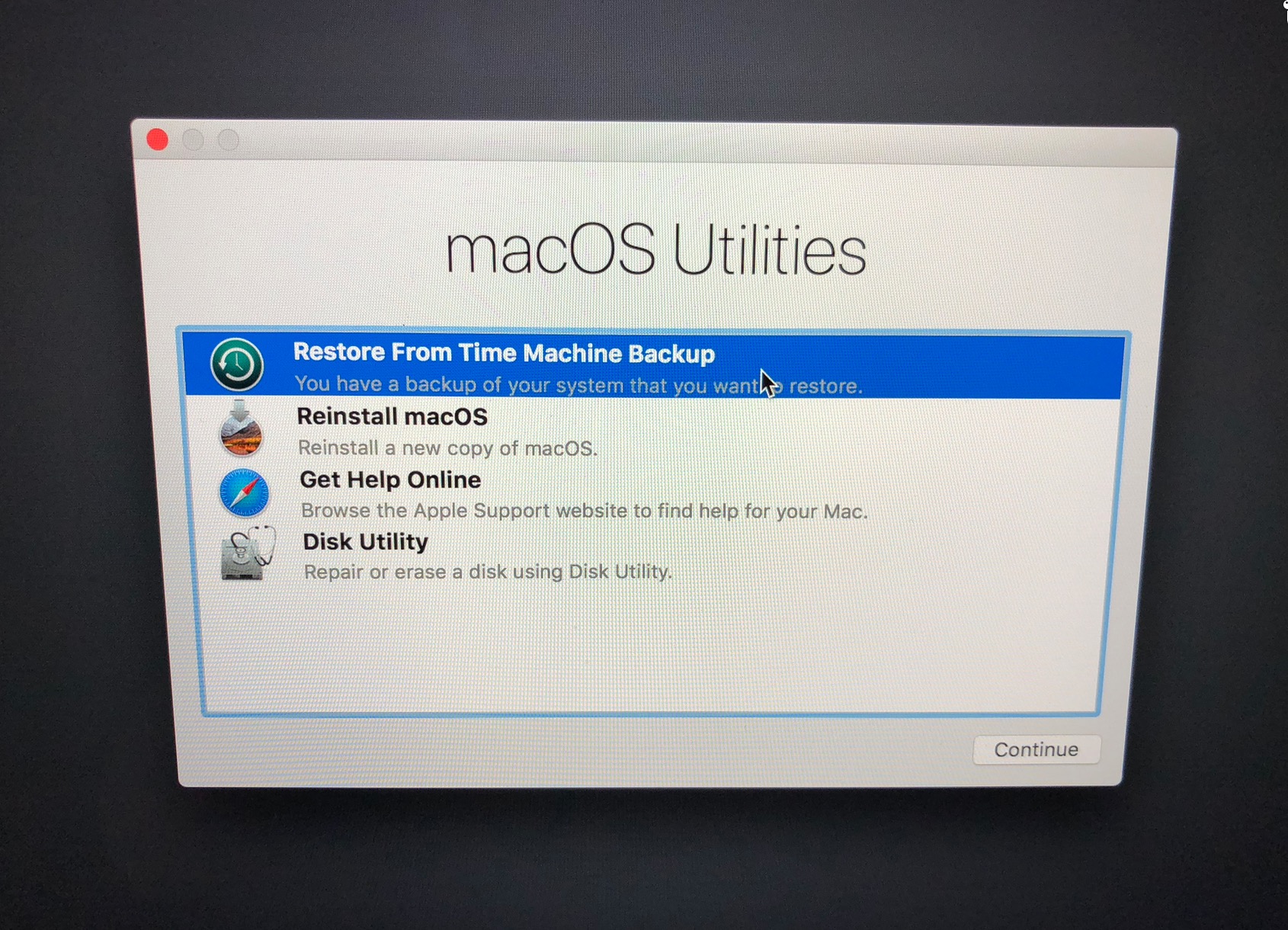 Here’s where you’ll forgive me for the crappy Recovery pictures, right? Right.

So select “Restore From Time Machine Backup” on that first screen as I’ve done, and then click “Continue.” You’ll get a screen informing (and warning!) you of what you’re about to do… 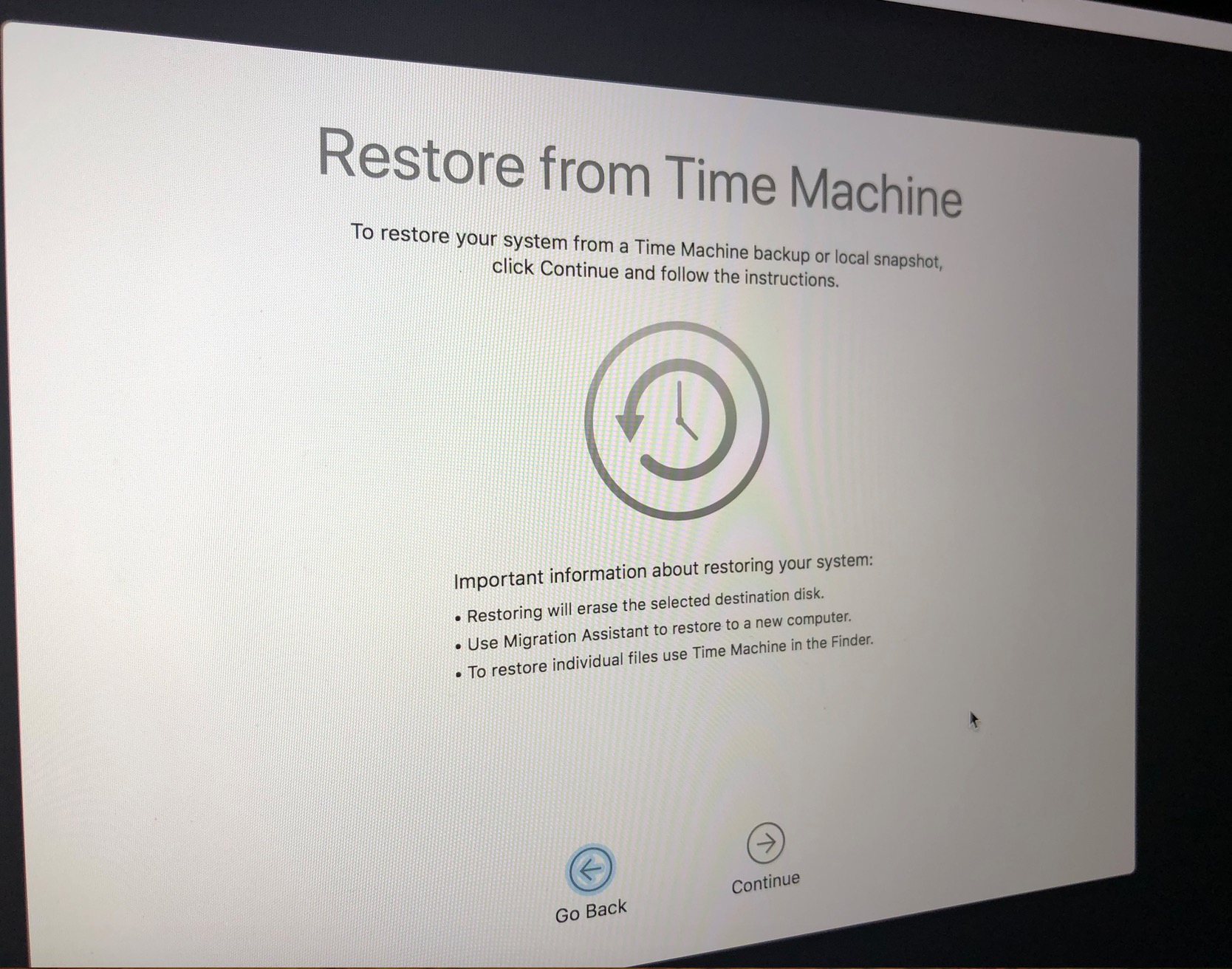 …but on the next screen, you can select a source to restore from. Obviously, you’ll only have your internal drive to pick if you don’t have a backup disk available. 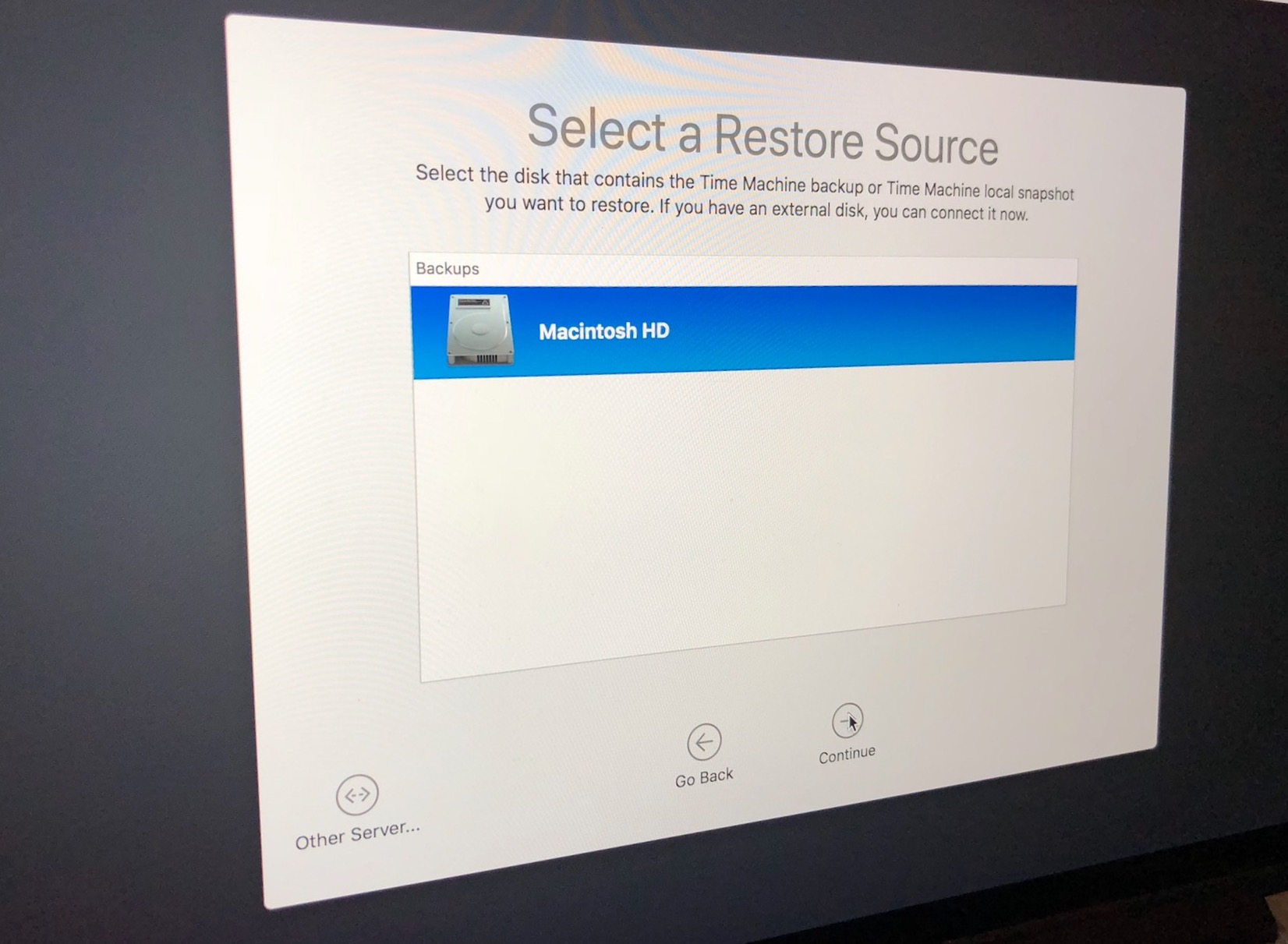 After that, you’ll need to enter an administrator password to confirm your choice if you’ve enabled FileVault encryption. 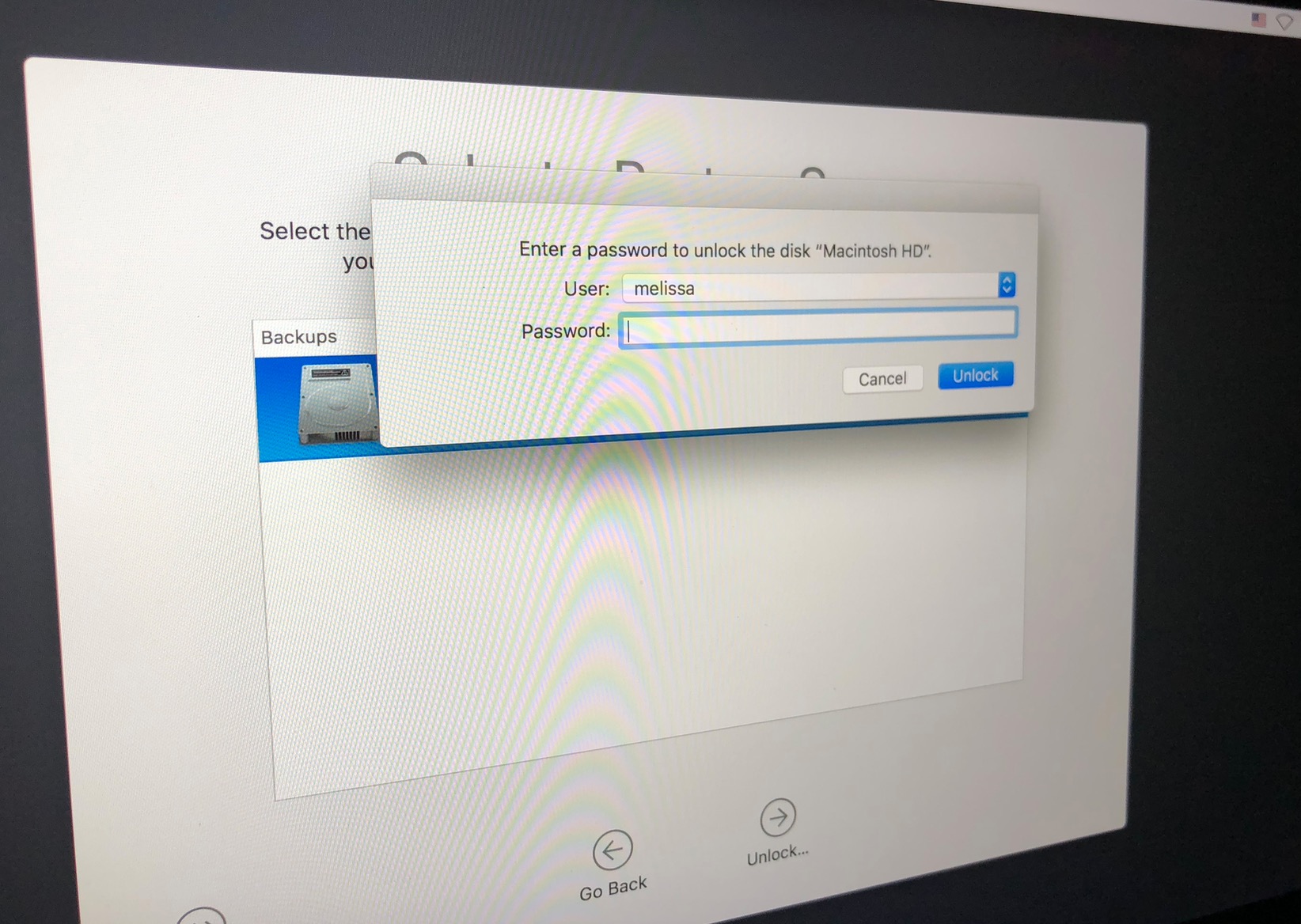 Once that’s done, you’ll see a list of the snapshots you can use to roll back your system! 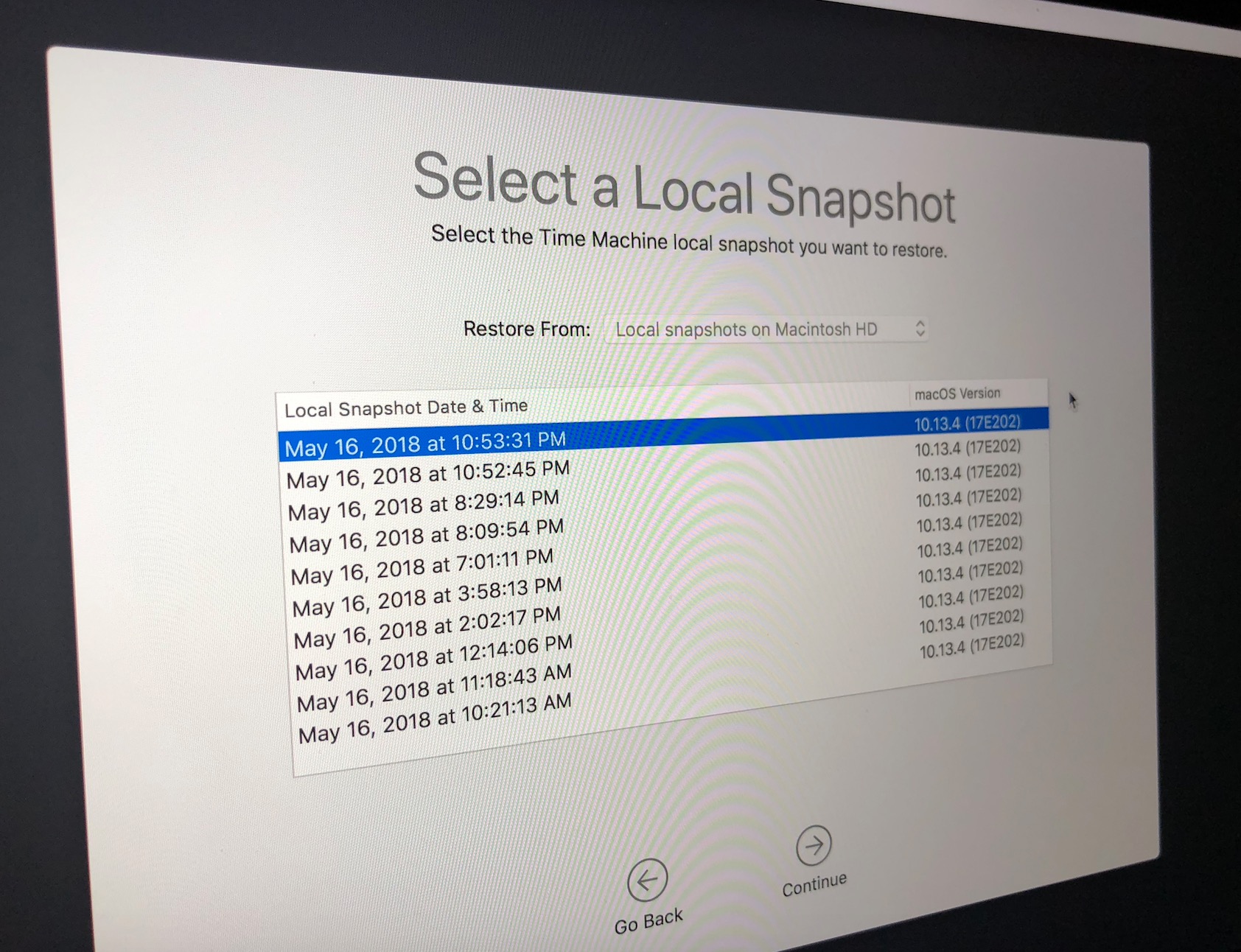 Choosing one will of course reveal another warning about how this’ll revert changes to your disk:

So just be sure you know what you’re doing!

Anyway, though, you can also use Terminal to manage these snapshots, at least a little bit; if you want to create one immediately, the command is tmutil localsnapshot, like so:

After you press Return, your Mac will confirm what you’ve done:

You can also list your existing local snapshots with this command:

For example, here are the ones my Mac had done recently:

That last part of each item is the date followed by the time in hours, minutes, and seconds. (So the first snapshot there was taken at 13 seconds past 10:21 in the morning on May 16.) If you’ve read the first support article I linked above, you’ll know that Time Machine saves snapshots every hour, and it automatically cleans out items every 24 hours. So for the most part, you really don’t need to manage this system yourself in any way, though there are also Terminal commands for deleting snapshots and so on (type man tmutil in Terminal for more info). But it’s nice to know that your Mac has got backups of itself now, isn’t it? Weird, and sort of meta, but nice.

No snapshots for me.

May be something to do with the lack of APFS on fusion drives. But sounds like APFS may be coming soon. I’ll check when that happens.

Would I be correct in assuming that this is only relevant to portable macs…not desktops?
As seems to be indicated in this article: https://support.apple.com/kb/PH25723?viewlocale=en_US&locale=en_US

Would make sense since portables are not always connected to their time machine backup drives.

It’s my understanding that these system-restore snapshots work on any APFS SSD drive, so if the iMac in question had one, I would think it would be creating snapshots (I believe that support article you linked was referring specifically to Sierra, not High Sierra). But I could be wrong, certainly, and I don’t have an SSD iMac to test it on! Perhaps another reader can clarify?

And I’m sorry for not including that in the original article, so good question! 🙂

So I contacted a friend of mine who has an iMac with an SSD in it because your question made me curious, and he did indeed get the same options within macOS Recovery for restoring from snapshots. So it looks like that Apple support article should be edited, at least!

But I hope that’s helpful, and thanks for piquing my curiosity!