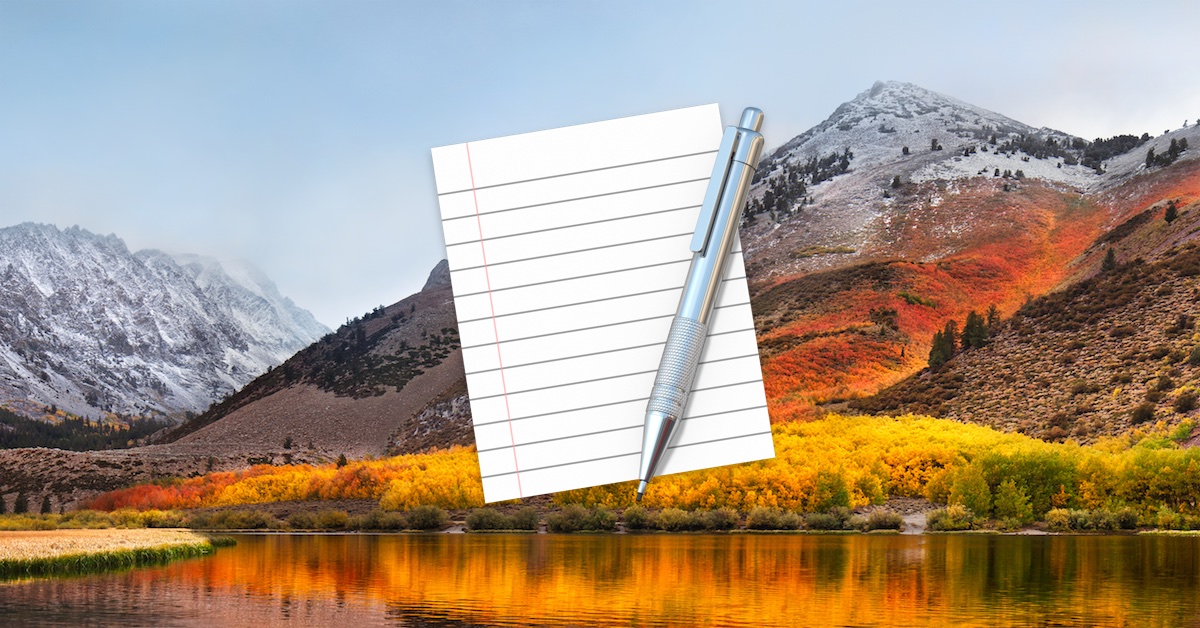 If you’ve ever had a bunch of text with extraneous characters—tabs everywhere, say, or tons of repeated paragraph breaks—then you’ve gotta check out TextEdit’s user-friendly way of cleaning stuff like that up. This feature’ll even let you search for patterns, so if you need to find “[tab][paragraph break][asterisk][digit],” you can do so. I know you won’t believe this, but it’s true—this tip came about because I had to use TextEdit to find something very similar to the above in a 500-page file. Yes, my day job is weird. But often very fun.

To take advantage of this, first you’ll open TextEdit, of course. Then you’ll paste in the text you’d like to clean up; here’s my example document below, which contains a ton of tabs that I don’t want in there. 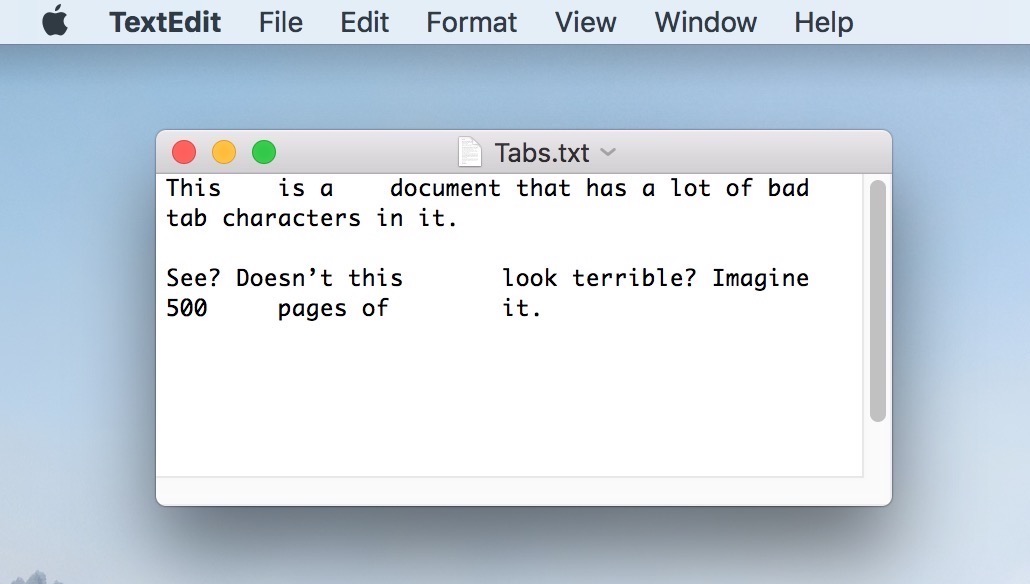 I’ve been working for TMO for like 87 years now. You’d think I’d get better at writing up stuff for my screenshots.

Anyhow, once your own file is ready for cleanup, you can press Command-F to open the “Find” toolbar, or you could instead choose Edit > Find > Find from the menu bar. 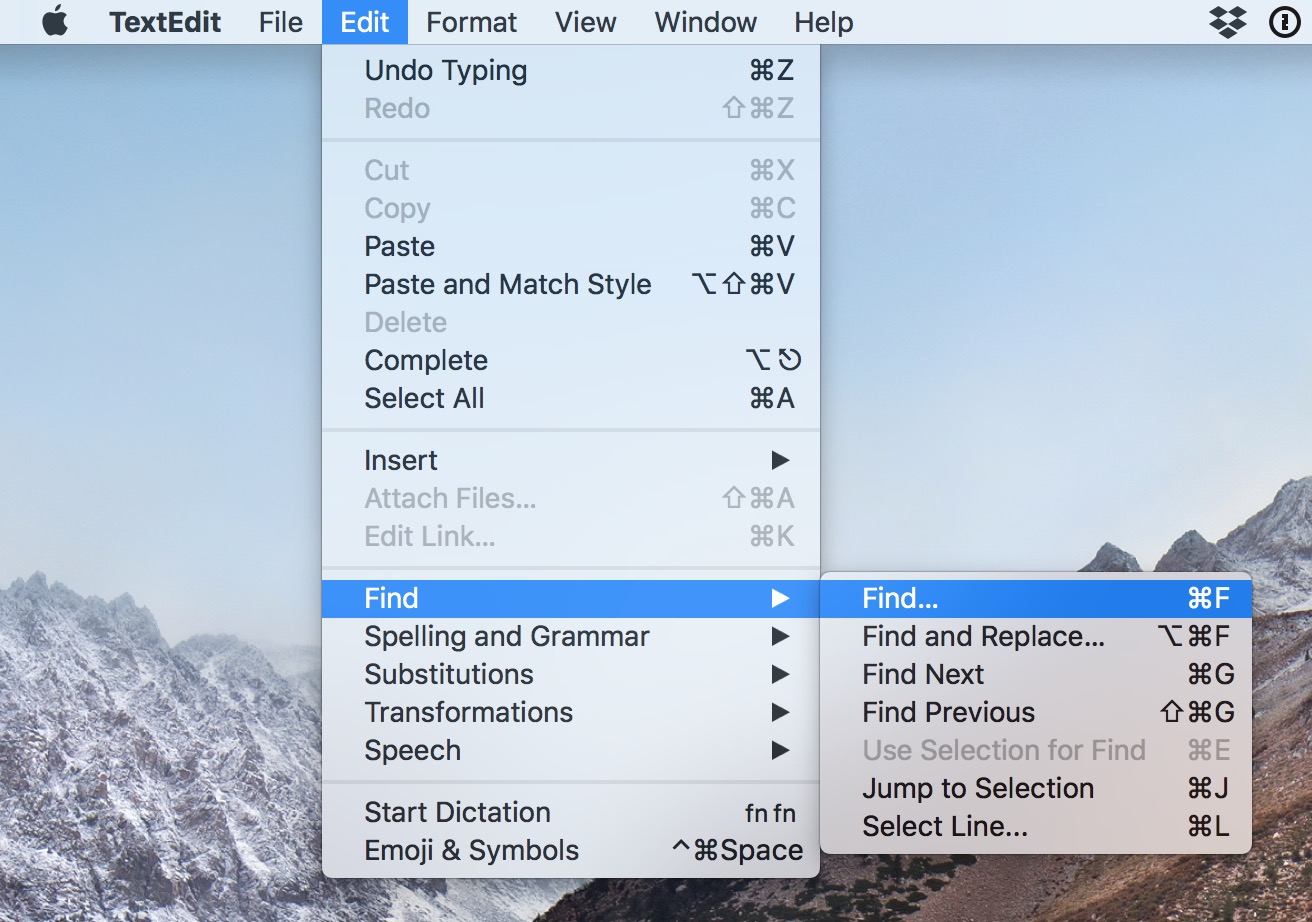 Then you’ll see the aforementioned toolbar appear, like so: 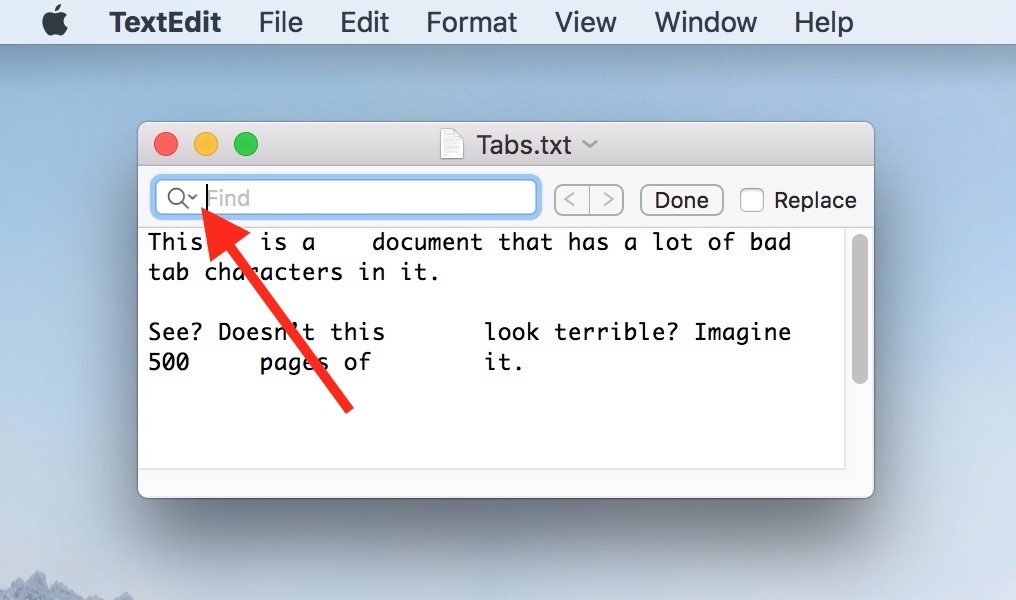 See that magnifying glass with the arrow I’ve called out? If you click that, you’ll get a magical little drop-down menu: 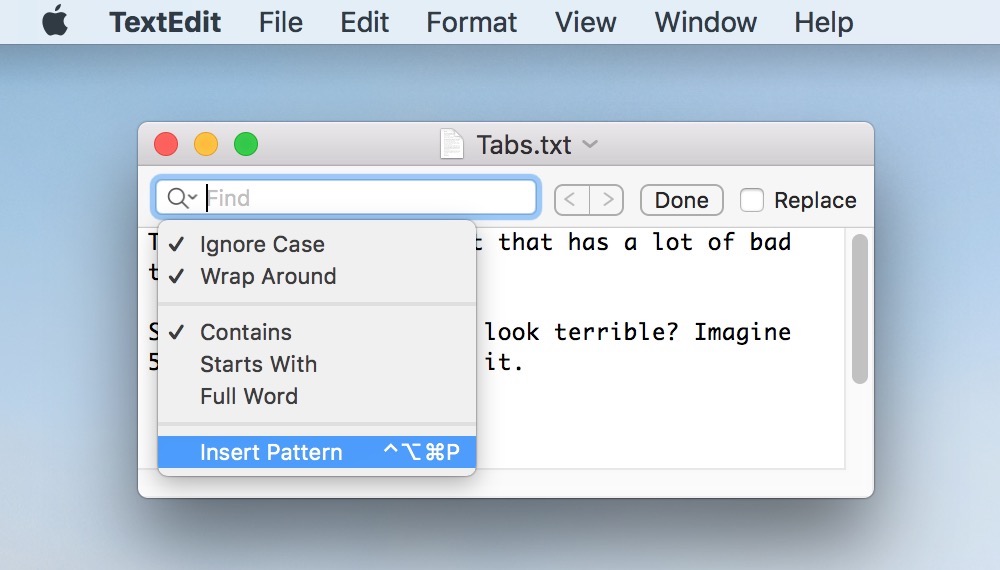 From that, you could turn on “Ignore Case,” which’ll mean that TextEdit will look for both “Apple” and “apple” at the same time, or you could choose to look for items starting with your search term, for example. But the highlighted option—“Insert Pattern”—is what I’m gonna talk about for this tip, so pick that. Here’s what you’ll see afterward: 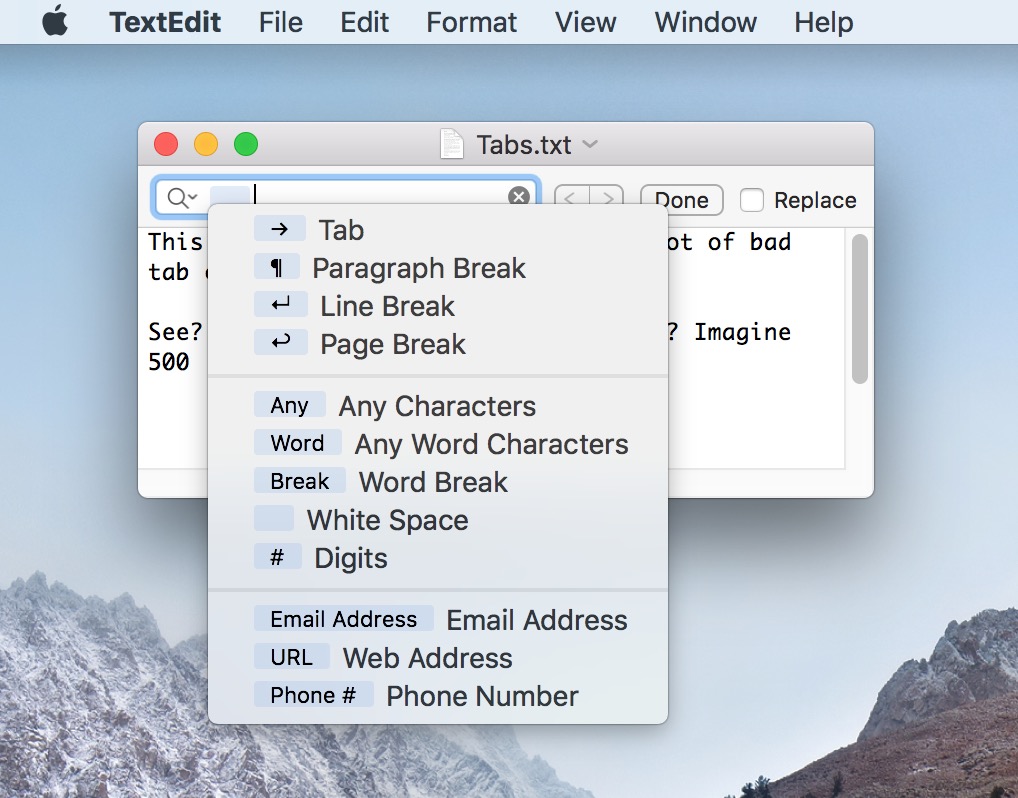 Ah, I love that so much. To strip out those awful tabs shown in my first screenshot above, I’ll just pick “Tab” from this menu, and TextEdit will search the document for that. 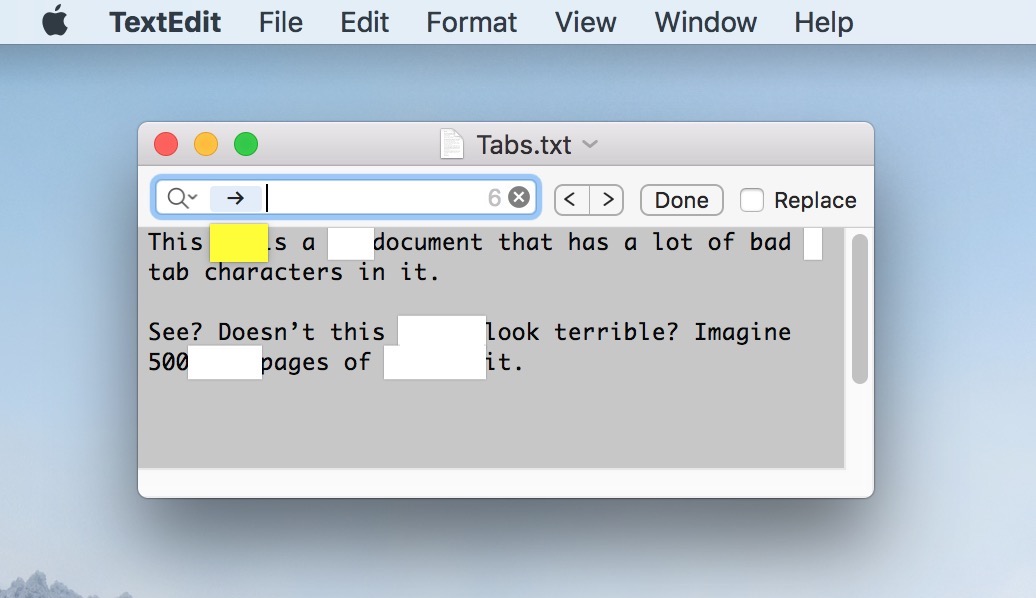 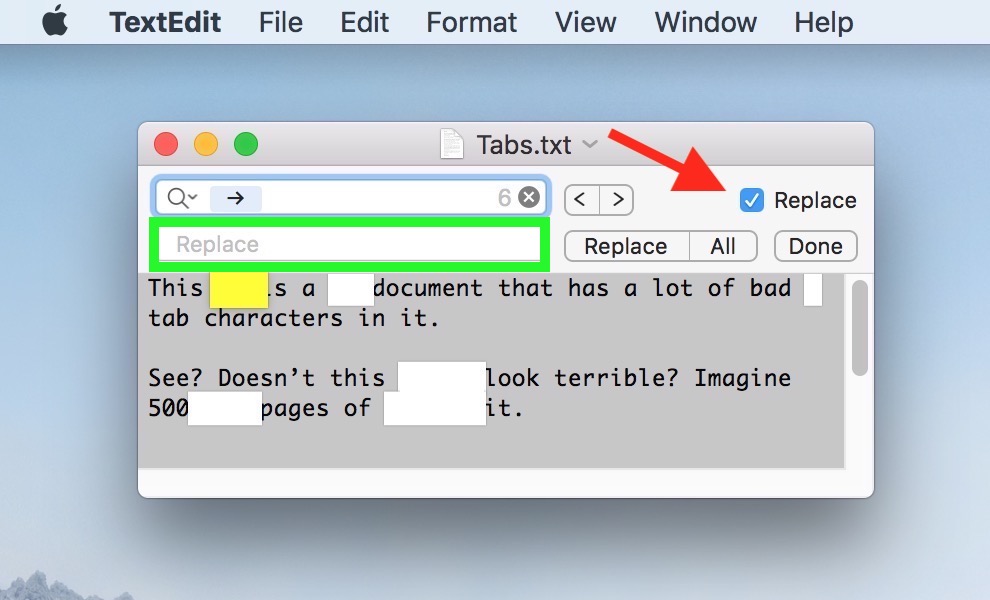 …I can leave the “Replace” field (outlined in green above) blank, which is the equivalent of saying “find all the tabs, and then replace them with nothing.” When I do that and click the “All” button, everything gets fixed! Check it out: 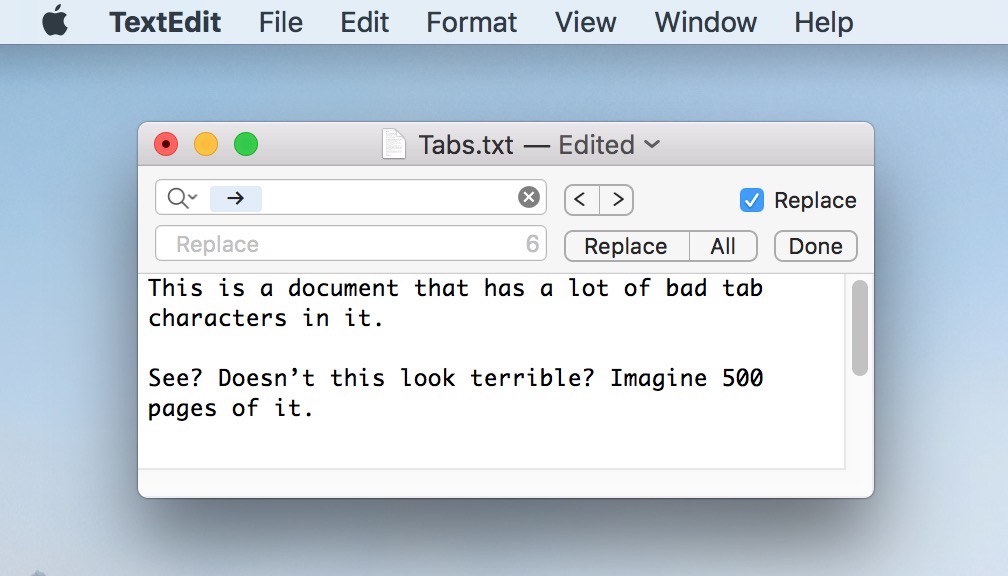 If you’d prefer the more careful way, you could click “Replace” instead of “All.” That’ll step through every found item and fix them one by one.

Finally, an especially neat feature of this is that you can use it to find patterns of characters instead of one at a time. Which is guess is sort of implied in its whole “Insert Pattern” name, right? Yeah. But anyway, if you visit that magnifying glass menu and pick “Insert Pattern” multiple times to add in additional characters, you could look for complicated patterns and potentially replace them. In my example below, I’ve chosen to search for any number followed by a tab and then a paragraph break: 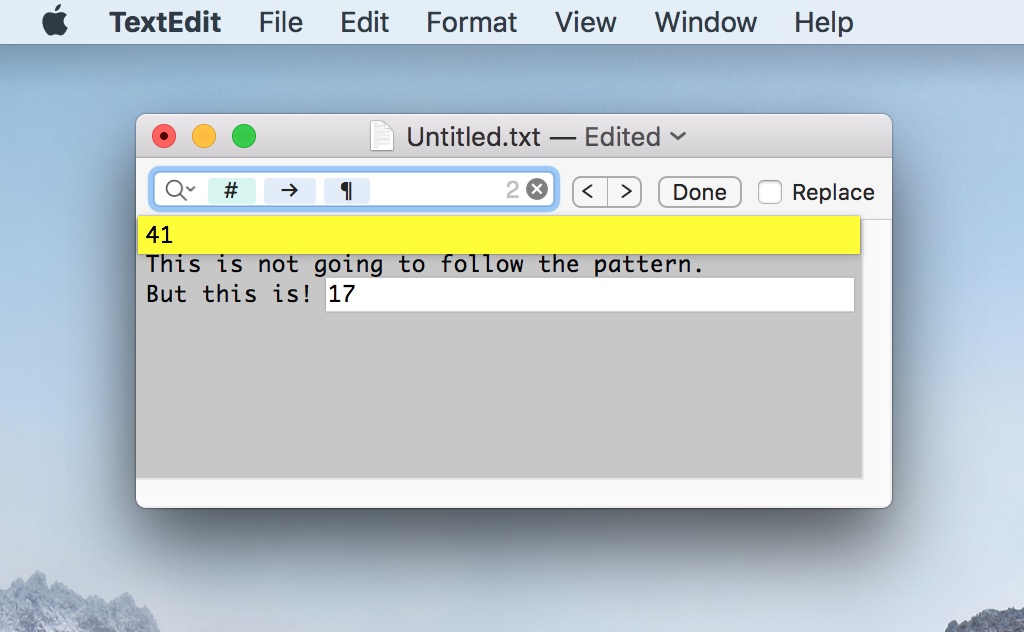 So as I mentioned at the beginning, you could use this to find really intricate stuff, including even words typed in between the available characters: 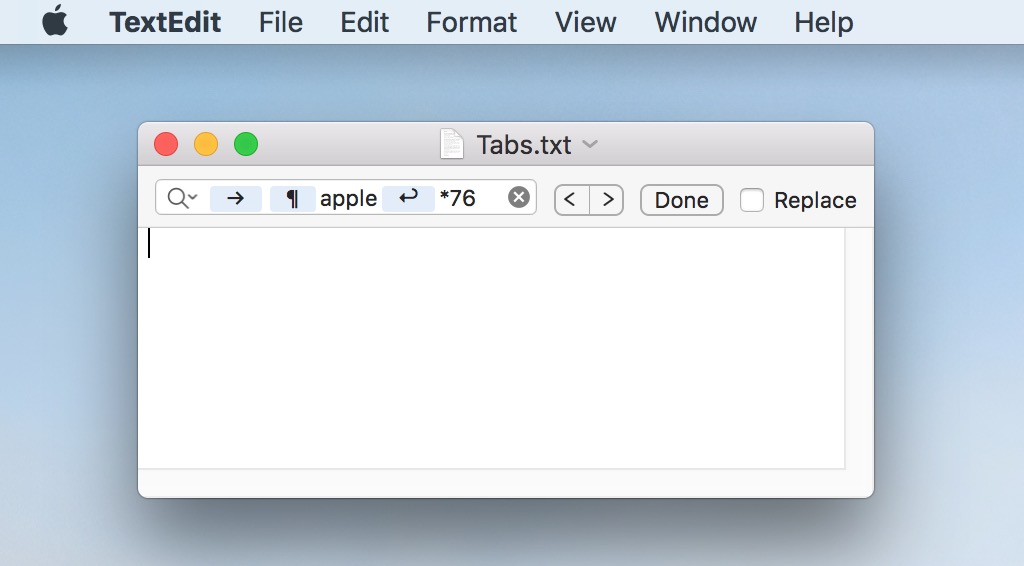 Ah, the good old “[tab][paragraph break] apple [page break][asterisk] 76” search. I use that all the time.

I think it’s a great idea to play with this and get familiar with how it works! It’s awesome how much power is built into such a tiny little free program. I love TextEdit anyway (I write all of my tips with it!), but this just makes it even better.

Apple’s “simpler” free programs are wonderful, though sadly seem to be largely ignored or denegrated: TextEdit is wonderful, as is Preview. They deserve more attention.

I love it! Thanks for pointing out this insanely helpful feature for us word-wranglers, Melissa!

Hey, thanks for reading, Jay! I appreciate that. 😀

Thanks for the comments, everyone! I’m happy to have helped. 🙂

I had no idea that was there. I do the same sort of thing a lot to format text for db queries. I usually have to find all return characters and replace them with a single quote and comma to get them into a list. This will save me a step or two. Thanks !

I had no idea that a Mac app could do RegEx! A very good find!

Now Apple needs to add that to Pages.

Neither did I. Oy, Apple and their sh****y documentation. Thanks very much, Melissa. 🙂