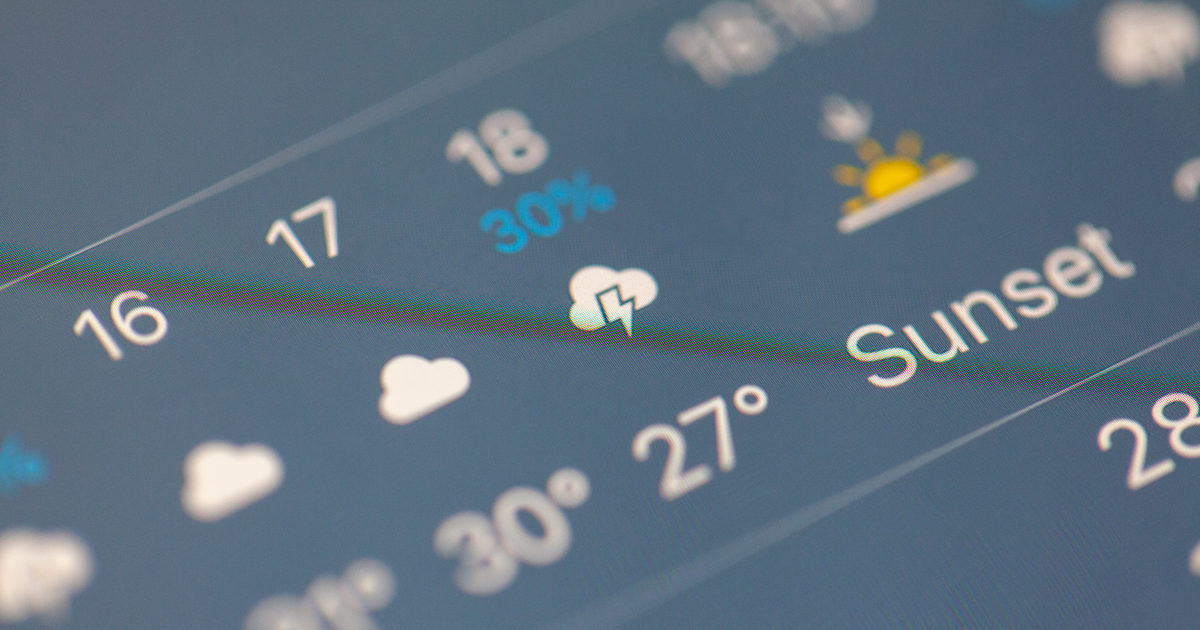 We’ve probably all seen it happen. Our Weather app calls for a 100% chance of rain. We don’t see a single drop. Did the weather forecaster get it wrong, or did Nature just decide to play a trick on us? In reality, it’s all a matter of understanding what that chance of rain really means.

Will It Rain 40 Percent of the Time?

When we hear the forecast say there is a 40% chance of showers and thunderstorms, most of us assume that means it’s going to rain 40% of the time. That’s actually not what the Probability of Precipitation number means.

According to the US National Weather Service, the Probability of Precipitation statement that you see on your iPhone as a chance of rain has a completely different meaning than most of us think. The Probability of Precipitation, according to the National Weather Service, describes “the probability that the forecast grid/point in question will receive at least 0.01 inch of rain”.

That forecast grid/point in question can describe a fairly large geographical area. So, what the Probability of Precipitation really provides is the probability for at least a small fraction of rain to fall somewhere within that forecast area.

The Chance of Rain for the Whole Forecast Area

So, if the forecast says there is a 100% chance of rain and you don’t see a drop, that doesn’t necessarily mean the weather forecaster got it wrong. Look at the geographic area covered by that particular forecast. You will likely find that at least 0.01 inch of rain fell somewhere within the forecast area.

The Weather app on your iPhone distills the forecast even further. As you can see in the screenshot, Apple’s Weather app doesn’t predict any precipitation in my area until Wednesday. In reality, the National Weather Service calls for the rain to begin in my area Tuesday night, and last throughout the day Wednesday.

Tuesday Night: Showers likely, then showers and possibly a thunderstorm after 10pm. Low around 65. South southeast wind 8 to 14 mph, with gusts as high as 24 mph. Chance of precipitation is 90%. New rainfall amounts between a half and three quarters of an inch possible.

Wednesday: Showers likely and possibly a thunderstorm before 1pm, then a slight chance of showers and thunderstorms between 1pm and 4pm, then a slight chance of showers after 4pm. Mostly cloudy, then gradually becoming sunny, with a high near 77. Southwest wind 15 to 17 mph, with gusts as high as 30 mph. Chance of precipitation is 70%. New rainfall amounts between a quarter and half of an inch possible.

For better specifics, you may see next-hour precipitation in the Weather app. That information is “hyperlocal,” and is included in iOS’s Weather app courtesy of Apple’s acquisition of Dark Sky in 2020.

I just want to know how to set my weather widget to 5 day forecast mode.