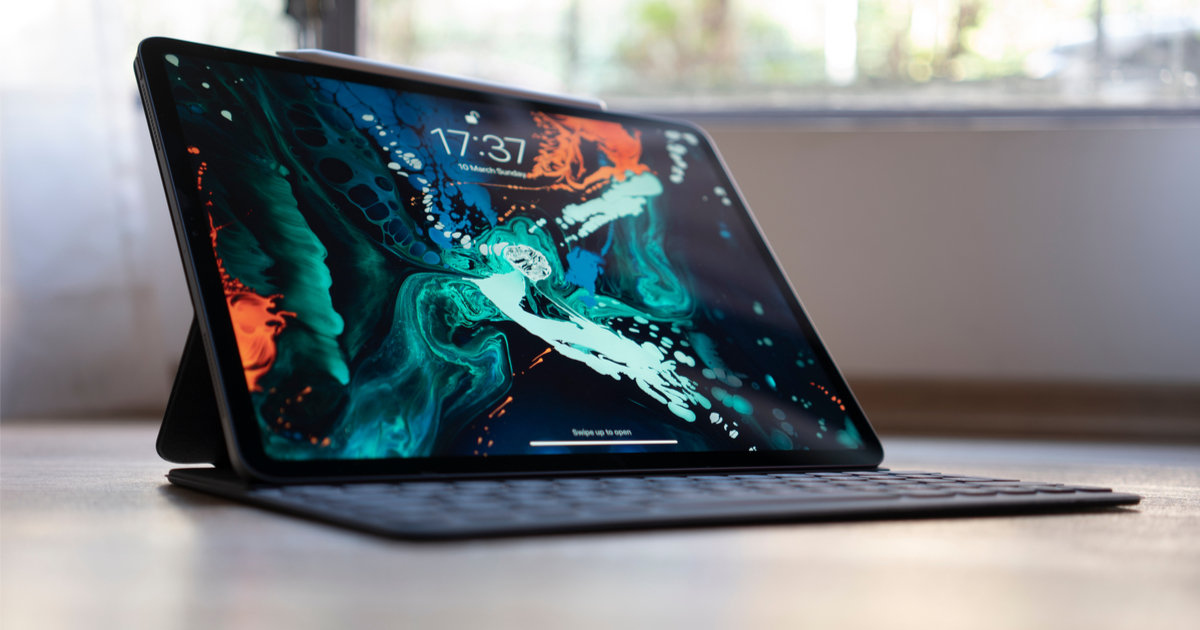 At this year’s WWDC, there was a tell that we are turning a corner in mobile and portable computing. It had less to do with what was said than when during the presentation it was said; the last place, the spot normally reserved for the main event. It was iPadOS.

Before we discuss why that was significant, let’s talk about the iPad. This has been one of Apple’s least understood devices. When SJ debuted the device, he expressly modelled its content consumption capability. He only modestly showcased its potential as a productivity device. Many forget that, at rollout in 2010, Apple unveiled the Apple Keyboard Dock for the iPad along with the iWork suite. This was no accident. As TMO’s former editor in chief, Bryan Chaffin, used to point out, this was Apple’s response to the netbook, a poorly conceived and minimally functional attempt at mobile, ultra-portable computing.  Netbooks were a failure of imagination better suited for the Darwin Awards than they were for productivity. The Street and analysts clamored for Apple’s netbook reposte. It was the iPad. By 2012, two years after the iPad’s release, the netbook was effectively dead, and buried one year later . At inception, the iPad demonstrated its value proposition as a superior, more appealing ultra-portable productivity device to the netbook. Apple was very deliberate in positioning the iPad as its answer to the netbook, a productivity device. Still, many continued using it primarily for content consumption.

The Cook, the Toaster Fridge and Heat in the Kitchen

On April 24, 2012, Tim Cook (TC) quipped one of his oft-cited yet most misunderstood phrases when he said, “You can converge a toaster and a refrigerator, but those things are probably not gonna be pleasing to the user”, in response to the question of laptop-tablet hybrids. While that comment confused many, it clearly presented no such confusion for Microsoft. That was evidenced by the company’s marketing response. Microsoft positioned its Surface Pro, not against the iPad, but against the MacBook Air. At the same time, it called out TC and Apple for hypocrisy ahead of the Surface Pro 4 release. At the center of it all was that “toaster-fridge” jibe. Apple positioned the iPad, its keyboard and productivity suite against the netbook. The company was hardly criticizing the use case for tablets in the laptop niche. It had just done that and now was addressing the solutions by which tablet computers entered that niche.

Microsoft was correct that Apple was critical of its solution. That solution, remember, was to shoehorn Windows into a tablet and layer it with a touchscreen skin. In effect, it was hobbling both the keyboard OS and the touchscreen with an inferior user experience with either. Microsoft designed Windows for the keyboard. Engineers designed tablets as a touchscreen. Simply grafting one atop the other was never going to be how Apple would solve that problem.

Rather, TC’s point was that the iPad, a tablet, had to remain true to its conceptual origins. It needed to evolve into a more versatile productivity device as a touchscreen computer. The iPad would acquire these features de novo, coded into its touchscreen core.  Apple would no more port macOS into the iPad than it would port iOS or iPadOS into a Mac. Yes, all three systems would adopt many of each other’s most popular features. Nevertheless, they did so consistent with their native code and form factor. Only by this means would there be no compromise in performance.

This is “convergent evolution” in computing, the independent development of similar features by different species in separate epochs. The Surface, by comparison, was a chimera, a composite of two distinct lineages, and as such, inferior to either in performance. Over time, while the Surface Pro has become a better device, it remains firmly positioned not against any variant of the iPad, but against the MacBook Air, which Microsoft delights in pointing out still lacks touchscreen capability despite its SoC chipset, and derides the Touch Bar. This is clever misdirection. The truth is, Apple will likely never make macOS touchscreen-enabled. Microsoft knows this. Rather, it seeks to forestall comparing the Surface Pro to the iPad Pro. After all, the Surface compares unfavorably against the iPad Pro as a touchscreen computer.

What’s a Computer? The Clash Between Imperfect Messaging and Conceptual Orthodoxy

In 2018, Apple ran an advert in which a kid asks, “What’s a computer?” Business Insider was not alone in taking a concrete interpretation of this comment. The kid is seen as “insolent.” Like many, the youth are so reliant on the iPad that they “no longer know what a traditional computer is.”

My take has always been that this was one of Apple’s most misunderstood attempts at challenging orthodoxy. This is something Apple regularly does. Recall this quote from Apple’s Think Different campaign, “We must constantly look at things in a different way. Just when you think you know something, you must look at it in a different way. Even though it may seem silly or wrong, you must try. Dare to strike out and find new ground.” The thing being looked at differently here was “a computer.”

The 2018 advert was a messaging misfire. Apple, in my view, was pointing out that we limit our concept of a computer to form factor. Simultaneously, we are blind to use case. The world in general adheres to the Gartner computer glossary definition of what is a computer, namely a traditional PC, based on form and a desktop OS, in which Gartner also includes the Microsoft Surface Pro, but not the iPad Pro. We will leave the discussion of IBM PC users in the 1980s arguing that the Mac was not a real computer because it did not use a command line but a GUI for another day, but the use of a GUI is relevant to our discussion. A GUI is input agnostic; a command line requires keyboard input. Apple watchers have noted this before, but failed to connect the dots that Apple laid out in its much-maligned iPad Pro advert.

Definitions and Labels Do Little to Truly Define What Constitutes a Mobile, Portable Computing Device

Today, monikers continue to mask the many variants of what truly is a computer. That the iPhone and the iPad both use a touchscreen GUI, and one is called a phone and the other a tablet, obscures their true use cases and therefore their functional niche to many observers. The fact that both devices have assumed tasks erstwhile reserved exclusively for PCs has not unblinded these people, despite their performing these tasks at a level superior to older PCs.

Put another way, a car, a motorcycle and an 18-wheeler are all motorized vehicles. Despite differences in form factor, capability and use case, would anyone argue otherwise? Your local department of motor vehicles would not. Likewise, were one to argue that unless it has a radiator, tailpipe and runs on liquid fuel, it’s not a car, would you agree, or like Mr T, “pity the fool?” The iPhone and the iPad both have far larger, more sophisticated, powerful and stable operating systems than macOS 7 ever was. Would you prefer to have “a computer” that runs macOS 7 on a Motorola 68000 series processor as your only productivity computer for the next six months over either of these? Computers are not defined by form, but by performance and use case. To paraphrase that wise philosopher, Forrest Gump, “A computer is as a computer does.” Amen.

Untethering the User From a Single Device

Having serviced its ecosystem with cloud computing, Apple has sought to untether the user from any one specific machine to an array of products that best suit users’ needs, providing task “hand-off” between devices as needed. This freedom of choice creates a tension between tradition vs change, between monoculture vs diversity. Apple wants us to know that we are free to move about the product line without restraints. Indeed, the lines between these devices have become blurred not only in hardware capability, but in operating system feature set. If anything, Apple’s iPad advert may simply have been too far ahead of the curve. Apple now appears to acknowledge at this year’s WWDC that when it comes to portable computing, for many users, the iPad already occupies that niche, and as it becomes ever more capable, will likely do so for most users.

This brings us to the present.

Whither Goest the iPad?

The iPad is Apple’s most versatile computing device. Though designed for touchscreen interface, it equally accommodates voice, stylus (Apple Pencil), keyboard with mouse or trackpad, as well as third party USB-C and Thunderbolt (M1 iPads) devices and storage media, and an external monitor. The iPad Pro is its most powerful and compelling exponent. When Apple failed to address the rising expectations of the iPad Pro user community with a robust update to iPadOS 15 for the M1 iPads in 2021, sales for this previously fast-growing sector declined across the entire line. Apple noticed.

Thus, at this year’s WWDC, Apple saved this highly anticipated iPadOS 16 update for last. Added were much sought after features, including more robust and efficient multitasking with Stage Manager; an improved file management system; the option to maximise screen content similar to macOS, and improved external monitor support with automatic aspect ratio adjustment for both extended and mirroring options, to name but a few. Apple did this, not by putting macOS into the iPad, but by coding productivity features that pro users like in macOS into iPadOS. Convergent evolution.

For many users, this will be sufficient impetus to migrate their portable computing needs to the iPad. For others, there are still notable gaps, not least of which is a paucity of pro apps. In competitive markets, pro app offerings should follow market share.

Apple is a data driven company that observes how the community uses its products and services. Based on the iPad’s growing capabilities as Apple’s most versatile computer, the iPad will continue to expand its portable use case. Just as laptops came to dominate the Mac lineup, the iPad may come to dominate that mobile, portable computing space sooner than later.

It will continue its quiet contribution to a revolution in how we address our computing needs, elevating us beyond “what is a computer,” to “what tools do I need,” and “which tools are most enjoyable and make me most productive.”

We can also anticipate that, as the Apple platform continues to evolve, the iPad will evolve with it, eventually morphing into, or being overtaken by a device as yet unknown, but with the capacity to provide the features a new generation of users require. Perhaps, by then, devices will no longer be judged by form factor, but by the features and options by which they meet our computing needs, and the question, “what’s a computer,” will finally be meaningless.