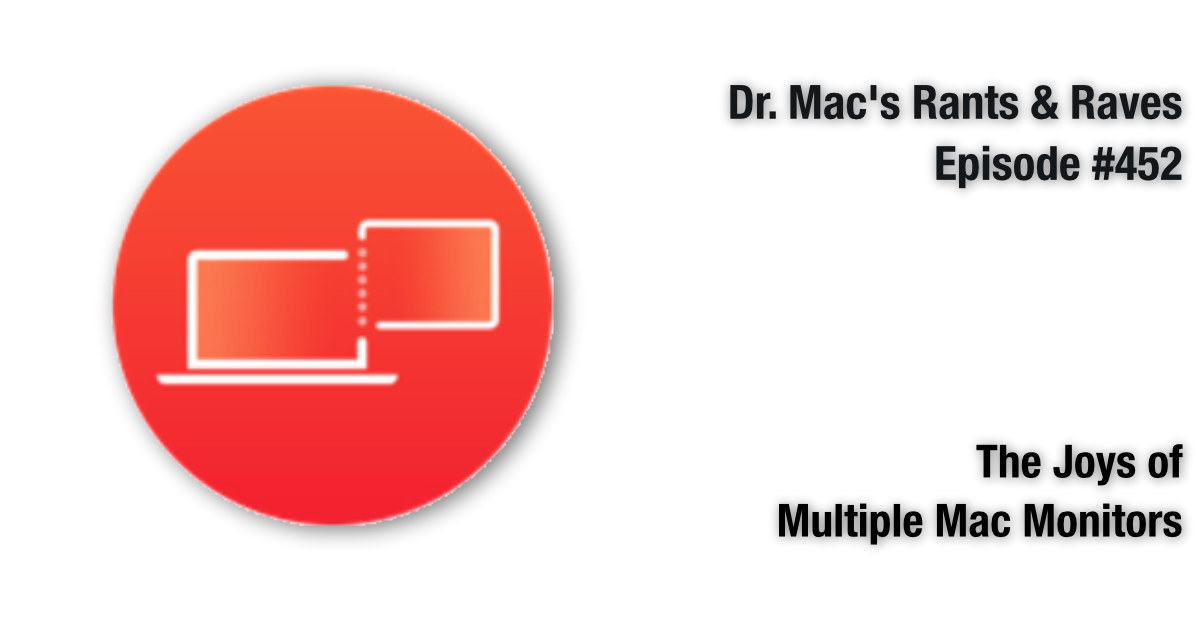 I’ve used at least two monitors with my Macs for as long as Macs have supported external monitors. My desktop Mac setup had three displays for a while, but never fewer than two. Now my two-monitor workflow is deeply embedded in muscle memory.

My 27-inch Monoprice monitor is my main screen. It’s straight in front of me at eye level, with my MacBook Pro’s 15-inch screen on its left (raised on a Roost stand, so the bottom edges of both screens are aligned). I use the big screen for what I’m working on and the smaller screen for everything else. In other words, the small screen is where I put Music, Safari, Mail, Messages, and other apps I might need. Having everything I might want to use today easily accessible on the smaller screen saves me tons of time every day.

When I work remotely using only my MacBook Pro’s 15-inch display, everything feels cramped and crowded, and it takes significantly longer to do simple things like change songs or start a web search. Since I couldn’t travel with a 27-inch monitor, I resigned myself to feeling cramped and crowded and working slower when out of the office.

A Lightweight Display You May Already Own

That all changed when I got an M1-powered MacBook Air and an 8th generation iPad. Before that, my Mac and iPad were too old to support Sidecar (macOS Catalina or later; iOS 13 or later), which transform your late-model iPad into an external display you can use with your late-model Mac.

Here’s an easy way to see if your Mac and iPad support Sidecar: With your iPad close to your Mac and unlocked, hover the Mac mouse pointer over the green “full-screen” button in the upper-left corner of every window. If “Move to Your iPad Name” appears in the pop-up menu that appears when you hover, you’re golden. Choose it, and your iPad becomes a second display for your Mac.

Now, use the Displays System Preferences pane to configure display options for your iPad, including mirroring, displaying the Sidebar or Touch Bar, and the relative positioning of your displays.

Almost Any Display will Do

If your Mac or iPad is too old for Sidecar, don’t despair. Most (if not all) Macs support one or more external displays, though you may need an adapter or dock. So, if you happen to have an old PC (or Mac) monitor you’re not using, consider putting it into service as a second (or third) display for your Mac. Or consider buying a second display, either new or used. You’ll find a wide variety of displays, many priced at $200 or less, at retailers including Monoprice.com, Amazon.com, and BestBuy.com.

If you’ve never tried a Mac with two (or more) displays, you’re in for a treat.