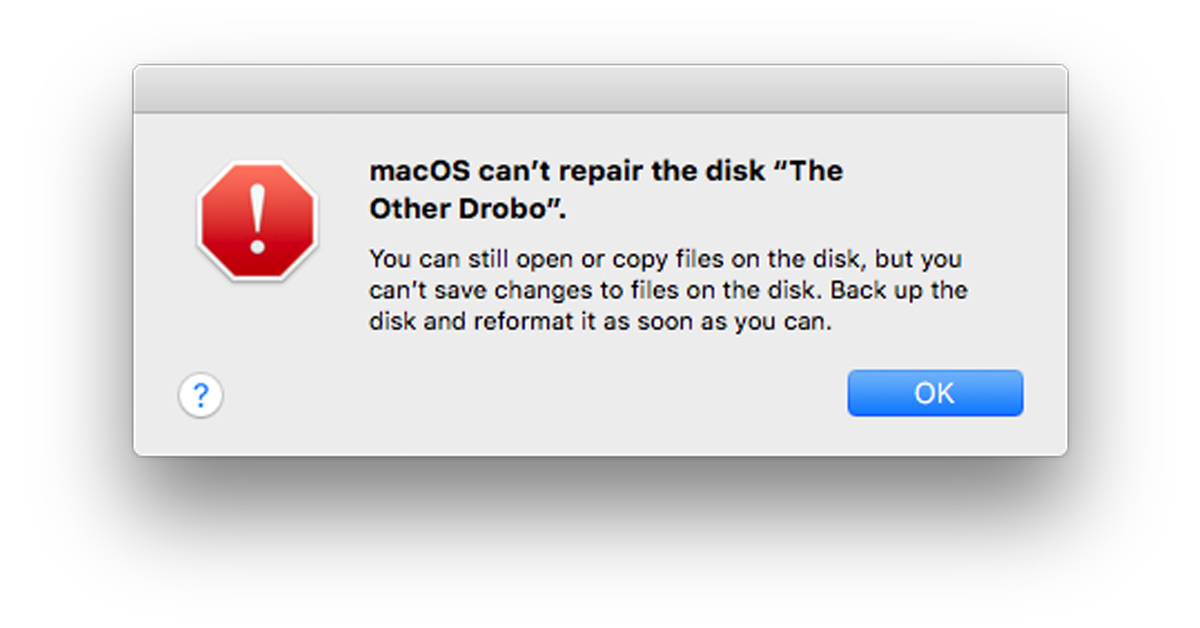 For as long as I can remember I’ve relied upon the same three products when my hard (or solid state) disks go bad: Apple’s Disk Utility (free), Prosoft Engineering’s Drive Genius ($79), and Alsoft’s DiskWarrior ($119.99).

When a disk fails or acts wonky—by not mounting when it should, or by disappearing from the desktop when it shouldn’t—the first thing I try is Disk Utility’s First Aid.

For one thing, it’s the only one of the three that doesn’t require you boot from a different disk to repair your startup disk (macOS High Sierra only). That alone is reason enough to try it first. For another thing, who knows more about repairing your boot disk than Apple? And, for another ‘nother thing, it’s free (and you know how much I love free).

But when First Aid fails, as it sometimes does, I turn to a pair of third-party tools. Until recently, I’d have told you it was a three-way tie, with each of the three resolving roughly one-third of my disk issues over time. But, since the beginning of this year I’ve had three disk failures only one of these three apps could repair.

First, Disk Utility displayed an alert I don’t remember ever seeing before:

So I tried my next line of defense, Drive Genius…

Drive Genius had a different alert I also don’t recall seeing before:

Cannot Mount Drive. ‘The Other Drobo’ is either not formatted or is a system owned drive that should not be used.” Note that both the Repair and Rebuild options are grayed out and unavailable.

At this point, it seemed my only option was to erase (reformat) the recalcitrant disks.

Then, DiskWarrior Fixed It (Three Times)!

Instead, I tried DiskWarrior, which repaired the disk damage after rebuilding and replacing the drive’s directories, all in around 30 minutes.

The big benefit was that I didn’t lose half a day erasing and restoring disks and got back to work in half an hour instead of half a day..

In the past four months, I have had three disks failures that Disk Utility and Drive Genius could not repair but that DiskWarrior could. (For what it’s worth, all three have performed flawlessly since their repair).

Does that mean you shouldn’t try Disk Utility’s First Aid or buy Drive Genius? Absolutely not. Disk Utility is faster, easier, and free. If it works, you’ve saved time and money. And, Drive Genius has many other disk analysis and maintenance options not available in the others, including Find Duplicates, Clone, Defragment, and Malware Scan to name a few.

DiskWarrior is a one-trick pony, but that pony can often repair damaged hard (or solid-state) disks when other apps can’t.

So, at least in my humble opinion, DiskWarrior is the one to get if you’re only going to get one.